More than 40 Newcastle residents attended a public forum at Lincoln Academy’s Cable-Burns Applied Technology and Engineering Center to learn about and give feedback on the first draft of the town’s new comprehensive plan and land use code Tuesday, April 11.

Since December 2016, the Newcastle Local Planning Committee has been hard at work reviewing the documents, which were drafted by the consulting firm Maine Design Workshop, according to Ben Frey, the co-chair of the committee.

During the forum, Frey gave an overview of some of the changes made to the drafts during the review process as well as questions the committee had for the consultants.

The committee first reviewed the comprehensive plan, the document that informs the land use code, Frey said.

The draft comprehensive plan outlines six “big ideas,” which include guiding principles, strategies, and a vision for Newcastle’s future.

The goals, which were expressed by residents during a weekend of planning events and workshops last spring, include better utilizing Main Street, being a lifelong community, celebrating local heritage, developing eco-adventures, and increasing innovation, entrepreneurship, and business in Newcastle.

The committee had some concerns about the photos in the draft comprehensive plan. Some of the larger photos spanned two pages, while others, the committee felt, didn’t adequately or appropriately represent Newcastle, Frey said.

Some of the “planner lingo” in the draft comprehensive plan, including “DIY” and “bootstrapping,” need clarification or reworking by the consultant, Frey said.

“When you read the definitions, the underlying concept sounds great, but the question is, can we use a different term or explain it in another way?” Frey said.

The committee spent hours discussing the definition of “rural character” and how it could have different meanings in different areas of town, Frey said.

“The definition of rural and our understanding of what it means is changing fast, and that makes the task of hitting the target of a definition a little bit harder,” Frey said. 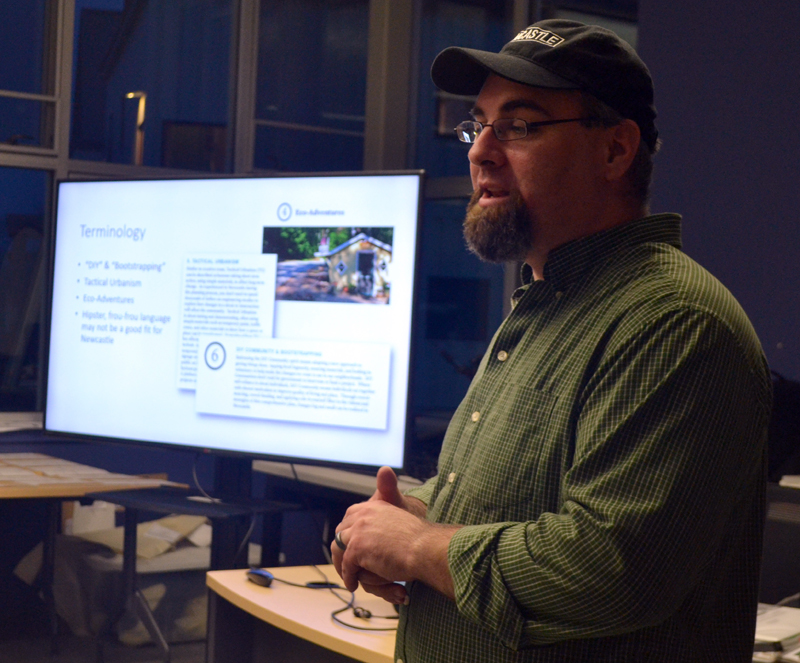 While the consultants have looked to other towns’ comprehensive plans for other definitions of rural character, the committee wants to make sure the definition in the planning documents best reflects what exists in Newcastle, committee Co-chair Ellen Dickens said.

While residents expressed strong support for encouraging business growth in Newcastle, the language in the comprehensive plan about home-occupation businesses requires revision, Frey said. In addition, the committee removed the requirements for minimum lot sizes of 5 and 10 acres for certain developments.

Renderings included in the comprehensive plan show the maximum potential development possible in certain areas of Newcastle. The committee is concerned that the firm’s renderings could be interpreted as reflecting the town’s desires, Frey said.

Rob Nelson said he found the renderings “appropriate and conceptual” as they “show the scenarios that these rules allow.”

After reviewing the comprehensive plan, the committee began work on the draft land use code. The code represents a fundamental change in the town’s approach to land use from a function-based code to a form-based code, Frey said.

“This (code) thinks more about the character of districts, and how we can enhance, maintain, and preserve the existing character, or how do we move and transition things that don’t really fit,” Frey said.

The committee reviewed the code by running different test cases involving different types of development, Frey said. The committee ran into similar concerns about the use of photos, terminology, and minimum lot sizes as it did with the comprehensive plan.

Each district has different allowances regarding the types of buildings, additions, and accessory structures that can be built. The use table included with the zoning map will be revised, Frey said.

The zoning map included in the draft separates the districts by lots, so no parcel is divided between character districts. The committee has worked to reclassify any mislabeled lots, and if landowners have any concerns about the labeling of their property, they should bring those concerns to the committee’s attention, Frey said.

The committee also discussed the design standards in the land use code and whether they are too restrictive, Frey said.

“Because this is dramatically and fundamentally different than what we have for a land use ordinance right now, a lot of our time has been spent trying to understand it,” Frey said. “Draft one is good, but we’re not at the point where we can make that call to vote yes or no on it yet.”

Nelson said that as he read the document and began to understand the changes in procedure, the standards did not feel restrictive.

The town could handle simple projects and additions administratively. Requests for modifications from the code would still be reviewed by the planning board or code enforcement officer, Frey said.

“All the normal avenues that we have in place today will still exist,” Frey said. “This really just shifts the more mundane stuff and makes it easier and faster to do.”

Feedback on the draft documents will be sent to Maine Design Workshop for inclusion in a second draft, which the town hopes to have in May. The second draft will undergo a similar review by the committee, followed by another public forum.

The third and final draft will go to a public hearing before residents vote on whether to approve the documents at the polls in November.

Ongoing participation from residents is welcomed and appreciated, Frey said.

“All of our meetings are public, and everyone is welcome,” Frey said. “We’ve had some people stop by already with specific concerns or questions they wanted us to address, and we really love the comments we’ve gotten so far.”

The committee meets at the town office at 7 p.m. every Tuesday.

To read the draft documents or submit feedback, go to newcastlemaine.us/services.