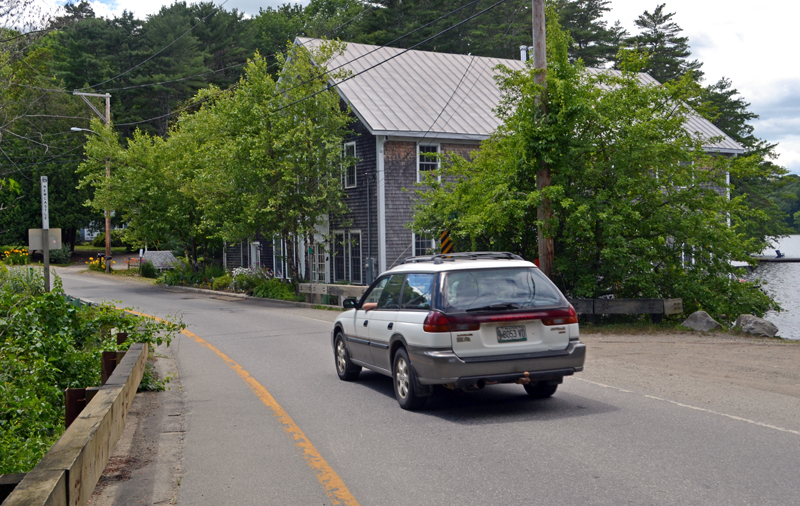 A station wagon drives over the bridge between Damariscotta and Newcastle in the village of Damariscotta Mills the afternoon of Tuesday, July 25. (Maia Zewert photo)

After the Maine Department of Transportation said it would not place any seasonal speed bumps in Damariscotta Mills, the Newcastle Board of Selectmen continued to brainstorm ways to increase pedestrian safety in the village.

DOT Traffic Engineer Dave Allen visited the Newcastle and Nobleboro boards of selectmen in separate meetings in August 2016 to discuss the department’s proposal to purchase and install seasonal speed bumps and signage for the purpose of slowing vehicles in an area with high pedestrian traffic, particularly due to the village’s swimming hole.

Both boards unanimously approved the plan, but the Nobleboro Board of Selectmen reversed its decision after receiving feedback opposing the speed bumps from residents of the village.

As a result, the DOT decided not to install speed bumps in Newcastle either, saying the bumps were “a two-town solution” due to their location, according to Newcastle Town Administrator Jon Duke.

During the board’s meeting Monday, July 24, Selectman Ben Frey suggested alternative ways to calm traffic in the area. One possible solution would be the installation of traffic bollards, which are short posts used to guide traffic.

Frey suggested that the bollards could be used to create a pedestrian walkway through the Mills. The bollards would be installed temporarily, and would not create additional noise in the area, which was one of the concerns some Damariscotta Mills residents expressed about the speed bumps, Frey said.

The bollards have been offered to the town free of charge, and Frey volunteered his time to install them.

“This would be done at zero cost,” Frey said.

Another possible solution would be to create a walkway by painting “essentially a sidewalk” on the one-way road in Damariscotta Mills, Frey said.

The town’s sidewalk, trails, and enhanced mobility committee discussed the possible solutions and voted to recommend that the selectmen look into the options, Frey said.

The selectmen expressed support for the ideas and discussed the proper course of action moving forward. As Route 215 is owned and maintained by the state, the DOT would likely have to sign off on any plan, Chair Brian Foote said.

In addition, the town of Nobleboro would need to be consulted, as the traffic-calming proposals would involve the Nobleboro side of Damariscotta Mills.

The selectmen directed Newcastle Road Commissioner Steve Reynolds to reach out to the Lincoln County Sheriff’s Office to see if it would support either of the proposals. If the sheriff’s office supports the safety measures, the plan will be brought to the DOT.

Once the DOT decides whether one of the alternative traffic-calming measures could be workable, a representative from Newcastle will visit the Nobleboro Board of Selectmen to see if the town is in favor of the proposal.