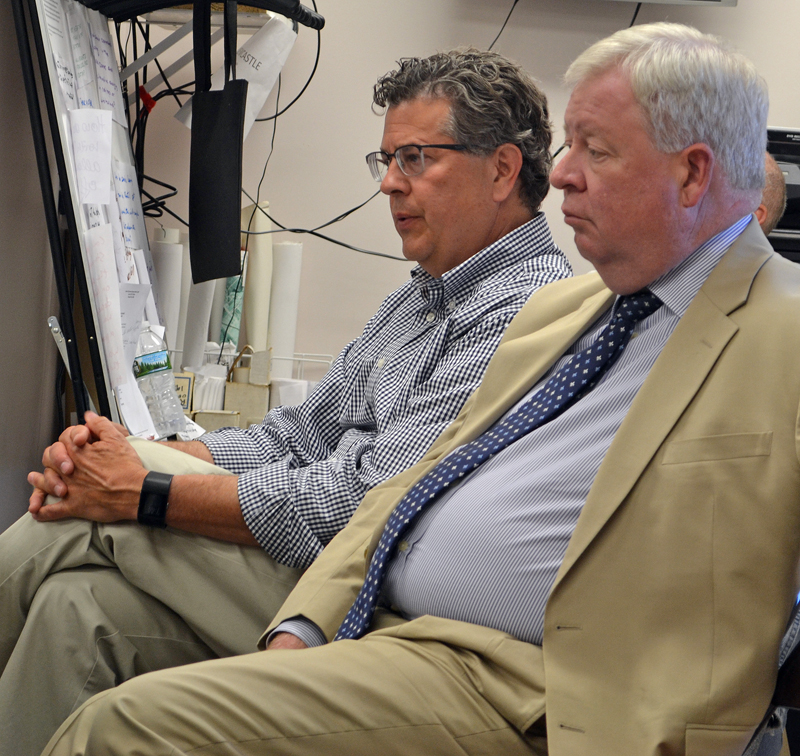 The Newcastle Board of Selectmen unanimously voted to take the next step toward entering into a $10 million bond agreement with Lincoln Academy during its meeting Monday, June 26. While expressing support for the bond, the selectmen also conveyed residents’ concerns about the school to LA officials.

By signing a resolution drafted by bond counsel Jim Saffian, of Pierce Atwood, the selectmen authorized the town’s involvement with the bond and authorized Chair Brian Foote and Town Administrator Jon Duke to sign the final documents when the school closes on the bond, Duke said.

Lincoln Academy and Newcastle have been in talks about a bond agreement since February. The town will act as the sponsor, or issuer, of the bond, which would allow Lincoln Academy to take out a municipal bond with a lower interest rate.

The primary use of the $10 million bond would be to refinance the academy’s debt from its purchase of property at 4 Hillcrest Road in Newcastle, now home to the development and alumni affairs office. The bond would also refinance debt from the construction of Kiah Bayley Hall, the renovation of Hall House, and the construction of the Lincoln Academy Alumni Dining Commons, according to the resolution.

The savings would total more than $1.2 million over the bond’s 25-year term.

The school will use any funds remaining after the refinancing to acquire, renovate, and equip a single-family residence at 80 Academy Hill Road for the academy’s special education program, according to the resolution, and then for other capital improvements and deferred maintenance.

The town will act as a “conduit” of the bond and will not have any obligation or responsibility to repay the bond, Saffian said in previous meetings. Lincoln Academy would be solely responsible for repaying the debt.

Saffian was not present at the June 26 meeting, which was attended by LA Head of School David Sturdevant and Chief Financial Officer Helen Telfer, along with F. Stephen Ward, chief financial officer for First National Bank. Members of the Lincoln Academy Board of Trustees were also in attendance.

During a public hearing about the bond June 12, a concern was raised about whether the town will continue to be involved with the bond after it is issued. According to the resolution, the town “will file any required reports and take any other action” that may be necessary to ensure the interest on the bonds will remain tax-exempt.

After consulting with the town’s bond counsel, Ronald Epstein, of the Portland law firm Jensen Baird Gardner & Henry, Duke told the selectmen June 26 that the town would have “no responsibilities” with the bond in the future, and said that understanding will be written into the closing documents.

Selectman Joel Lind asked about the academy’s plans to purchase the house at 80 Academy Hill Road.

One of the school’s goals is to grow its programs to meet the needs of students, Sturdevant said. In order to run some of the programs, more space is needed, and it would be more cost-effective for the academy to purchase the building than to rent space elsewhere.

After making a motion to sign the resolution, Selectman Ben Frey said he has received numerous phone calls from people who are “very unhappy with the academy” at the moment and would “desperately somehow like to see the academy held accountable.”

The residents who have spoken to Frey have said they do not feel their concerns about Lincoln Academy are being represented or heard, despite the town sending money to the school through its secondary education budget, Frey said.

“It’s a very emotionally charged issue, but the two, in my mind, have nothing to do with one another,” Frey said.

Frey said he sees the bond partnership as an opportunity to have more conversations between the town and the school and create a better relationship moving forward. The other selectman agreed with Frey and said they would like to work with LA to improve the relationship.

Residents might not be aware of everything the school does for the town, which could be contributing to their concerns, Selectman Carolyn Hatch said. Recently, the Newcastle Fire Department hosted a LifeFlight training exercise at the school for firefighters across the county. As part of the training, a helicopter landed on the LA track field.

Doing more to promote what the school does for the community, including opening its grounds for training exercises and events, could create a better relationship, Hatch said.

Sturdevant thanked the selectmen for their comments, and said he is always happy to talk to anyone who has questions or concerns.