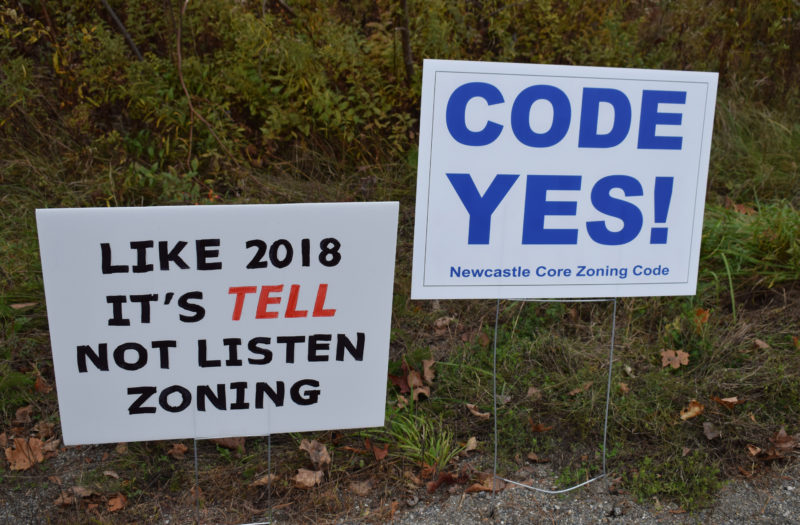 Signs on the side of Mills Road in Newcastle illustrate differing opinions on the Core Zoning Code, which will go before voters in a special referendum on Election Day, Nov. 3. (Evan Houk photo)

The Newcastle Board of Selectmen and members of the Newcastle Planning Board defended the town’s proposed Core Zoning Code during a remote public hearing Monday, Oct. 19.

The town will have a special referendum to consider the Core Zoning Code and a new roads, driveways, and entrances ordinance on Election Day, Nov. 3.

The question before voters would also repeal and replace eight separate “core modules” now part of the current land use ordinance in order to make them stand-alone ordinances.

An explanation at the bottom of the warrant for the referendum explains that “there are no revisions to the language in these eight documents, they simply carry over and remain in effect.”

The selectmen reviewed two letters from concerned residents and addressed the questions in the letters. No members of the public attended the public hearing, held via Zoom.

The first letter was from Seth Stewart, of Glidden Street, who asked for an executive summary and a cost-benefit analysis of the changes, among other things.

Stewart’s primary concern was the elimination of the design review committee. Selectman Tor Glendinning, an architect who chaired the committee for seven years, explained.

He said that in the current land use ordinance, the design review district is broad. In the core code, historic districts are more specific, down to the parcel, on Glidden Street and in the villages of Damariscotta Mills and Sheepscot, where there are predominantly historic buildings.

Glendinning said the design review committee burdens projects with a subjective review by members who are not necessarily qualified in historic preservation.

“There’s not a lot of language in the design review ordinance to really give teeth to a pointed review,” Glendinning said.

Stewart, in the letter, asked why the code needs to be passed now.

Ben Frey, chair of the planning board, said the new code would facilitate growth of the town’s tax base. He said the town would not see any immediate fiscal benefit from enacting the new code, but will continue to see negative effects if the current land use ordinance remains in place.

“If you look into the past at where we’ve been and extrapolate from where we’ve been to where we’re going, if we don’t change something, the outlook isn’t great financially for the town, for taxes,” Frey said.

Selectman Rob Nelson said one of the benefits of the core code is how easy it will be to amend. He cited the possibility of a committee forming to draft a historic preservation ordinance if the core code passes.

Nelson said the process of developing the code started in 2014 and involved numerous public meetings throughout the town that led to the adoption of a comprehensive plan in 2018 by a nearly 2-to-1 margin.

“That comprehensive plan was developed in the largest planning effort in the history of Newcastle,” Nelson said.

The plan establishes a vision for the future of the town through five “big ideas,” or guiding principles. The ideas are: utilizing Main Street, being a lifelong community, celebrating local heritage, preserving rural character, and increasing innovation, entrepreneurship, and business.

Later in 2018, voters rejected a character code intended to replace the current land use ordinance, leaving the town with a land use ordinance — first drafted 48 years ago, in 1972 — that does not comply with the comprehensive plan.

The intent of the proposed Core Zoning Code is to create a regulatory framework for new building and development that will line up with the goals in the comprehensive plan.

The selectmen appointed a seven-member committee in June 2019 to draft a Core Zoning Code that addressed concerns about the character code but still lined regulations up with the philosophy of the comprehensive plan. Since then, the committee has been working to draft and revise the Core Zoning Code and the new roads, driveways, and entrances ordinance.

Brian Foote, chair of the board of selectmen, said a cost-benefit analysis in terms of a dollar amount would be hard to quantify.

“In my opinion, the new code would allow us to expand Newcastle more, allow more businesses into basically the entire town,” Foote said.

The second letter was from Nicholas Barth, of Lynch Road, who questioned standards regarding conservation of natural resources in the mobile home parks ordinance.

Foote said neither the mobile home parks ordinance nor the seven other stand-alone ordinances would change at all.

“I would think if he’s got suggestions to it, that would be something we’d attack in the next couple years,” Foote said.

Nelson said the planning board will be charged with reviewing the ordinances once or twice each year if the core code passes, to propose fixes or additions.

Town Manager Jon Duke said the town needs something to replace the current land use ordinance because it is difficult to interpret and enforce.

“That 274-page document has a lot of inconsistencies and a lot of issues that make it difficult for the town to defend and enforce its ordinance,” Duke said.

Selectman Wanda Wilcox said the reduction of setbacks in rural areas will allow residents to expand and build while maintaining open fields and rural character.