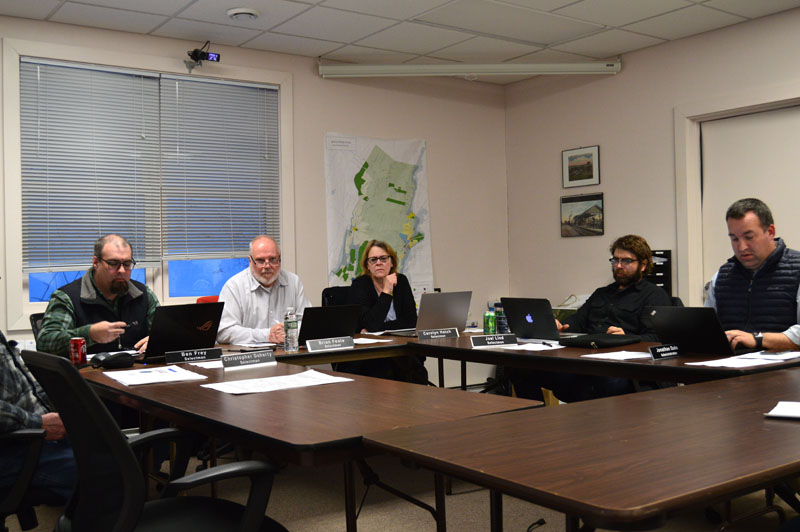 The Newcastle Board of Selectmen floated the idea of having a town manager instead of a town administrator Monday, April 8.

Prompted by Mal Carey’s letter to the editor in the March 14 edition of The Lincoln County News, Selectman Ben Frey initiated the discussion by outlining the 14 responsibilities of a town manager under state law.

Referring to the statute and its 14 listed “powers and duties,” Frey said “there isn’t one that we don’t, in some capacity, direct the town administrator to do.”

“The main difference is that we are requesting or requiring the person that fills the role of town administrator to have all the responsibility and none of the authority to enact the duties that we are all asking that position to do,” Frey said.  “Efficiency is a main concern.”

Newcastle Fire Chief Clayton Huntley voiced some concern over the last of the 14 responsibilities, which says a town manager “Has exclusive authority to remove for cause, after notice and hearing, all persons whom the manager is authorized to appoint and report all removals to the board of selectmen.”

“I’ve seen some good administrators in this town and I’ve seen some bad ones. If you lay everything in the hands of one person, I think we’re skirting with disaster,” Huntley said. “This town doesn’t have a charter and a lot of towns that have managers have charters and that manager is held to that charter.”

Frey agreed that the item regarding removals would be the main difference in job description between the role of town administrator Newcastle has now and the role of town manager under discussion.

Frey said he would “love” to have a discussion about developing a town charter to more clearly define town processes and the various roles of town officials.

“We have a collection of policies and procedures and internal workings.  Codifying all of that into a charter, I think, is a worthwhile endeavor. It would make us operate a little differently. And I honestly have no problem with that after doing the research I’ve done,” Frey said, referring to his research into the way other Maine towns have fared with town managers.

Selectman Joel Lind referenced the process of issuing payment to various entities as an example of a way in which the board of selectmen has already shifted more authority to the current town administrator, a move that would be unnecessary with a town manager.

“We still look over every single expenditure and approve it as a board, but we actually have given the authority to cut those checks to those people to the town administrator. But we still have that oversight,” Lind said.

State law designates a town manager as the “purchasing agent” for a town.

In response to an inquiry from Selectman Christopher Doherty about the cost of shifting to a town manager structure, Frey said, “It costs exactly the same.”

“Under Maine law, to make a change to your form of government, you have to hold a public hearing within 30 days of the vote,” Frey said.

The board would have to hold a public hearing on the issue of switching to a town manager at least 30 days before the annual town meeting, scheduled for June 11, in order to bring the matter to a vote there.