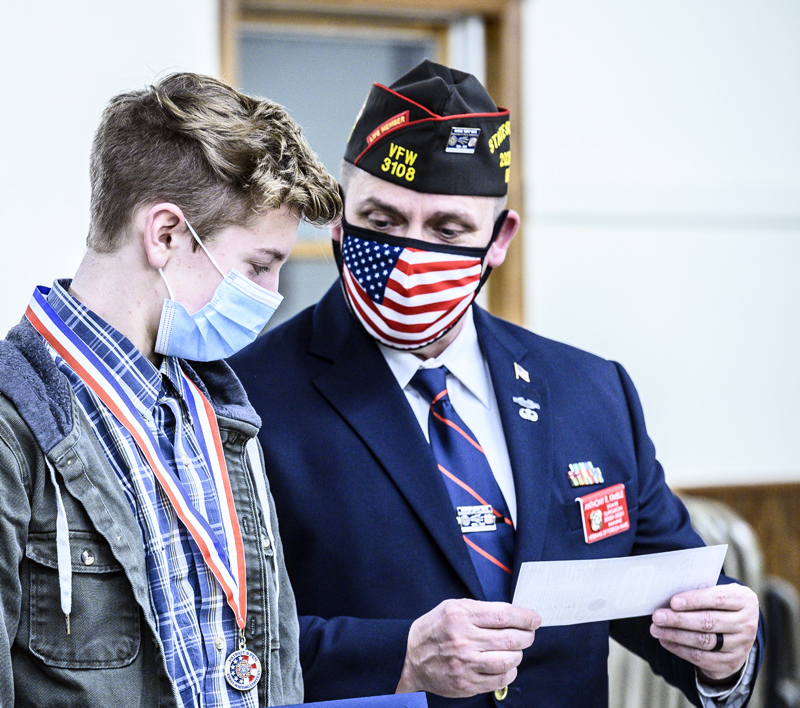 E.J. first won the post-level contest through the Soule-Shuman Memorial Post 4525 in Waldoboro, which has a history of post winners going on to success at the state level.

During a ceremony at the Waldoboro post on Thursday, March 11, E.J. received a check for $500, a Patriot’s Pen Medallion, and a certificate in recognition of his achievement. State Cmdr. Michael “Keith” Davis, District Cmdr. Roger Stevens, and program Chair Anthony Kimble were on hand to present the prizes and congratulate the winner.

E.J.’s parents, Katie and Robert Hunt; his twin brother, Drew Hunt; and his grandparents, Judy and Norman Hunt, listened as he read his essay aloud to a gathering of VFW members. 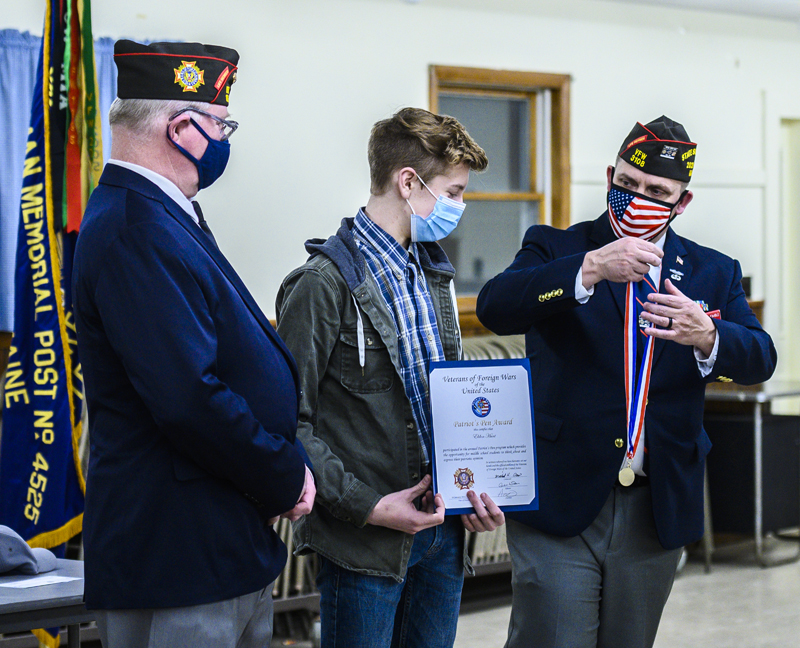 E.J., an eighth grader at Coastal Christian School in Waldoboro, has participated in the Patriot’s Pen program every year he has been eligible. He took second place at the school level in sixth grade.

Drew won second place at the school level last year. “It’s like a family monopoly,” Kimble said. Next year the brothers will both be eligible to participate at the high school level in the VFW’s Voice of Democracy competition.

“This area has some of the highest entry levels in the state,” Kimble said. “Many schools build their teaching curriculum around the essay assignment.”

According to E.J., all of Coastal Christian School participates in the contest. His teacher “pushes us to improve,” he said.

Patriot’s Pen is a national VFW program that encourages students in grades six through eight to write an essay “expressing their views on democracy.” The theme for the current school year is “What Is Patriotism to Me?” 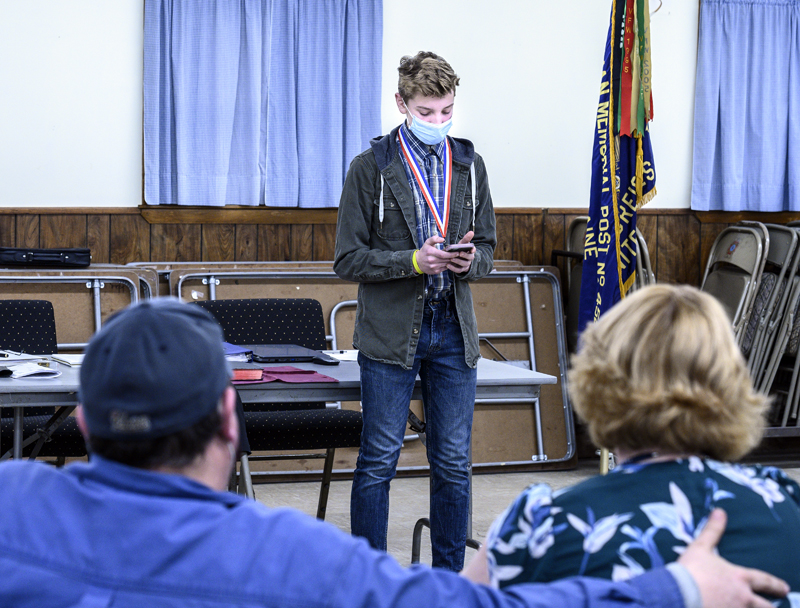 E.J. Hunt reads his prize-winning essay while his parents watch from the audience at the Veterans of Foreign Wars post in Waldoboro on Thursday, March 11. (Bisi Cameron Yee photo)

According to Kimble, more than 165,400 students enter the contest each year and win more than $1.4 million in awards.

E.J.’s 394-word essay defines patriotism as “loving, defending, and being loyal to your country.” E.J. described how those three actions reflect his own ideals in three parallel paragraphs, concluding that, “altogether, these three principles show what patriotism means to me.”

Regarding love of country, E.J. Hunt wrote: “In America there are those who do not love our nation, but the ones who do are true patriots.”

Regarding defense of the country, he wrote: “America, its liberties, and freedom are fragile, and it is up to the patriots to protect it.”

Regarding loyalty, he wrote: “Loyalty is what makes our American soldiers so great, and this alone proves why loyalty is the main factor in patriotism, because if you aren’t loyal, then how can you be a patriot?” 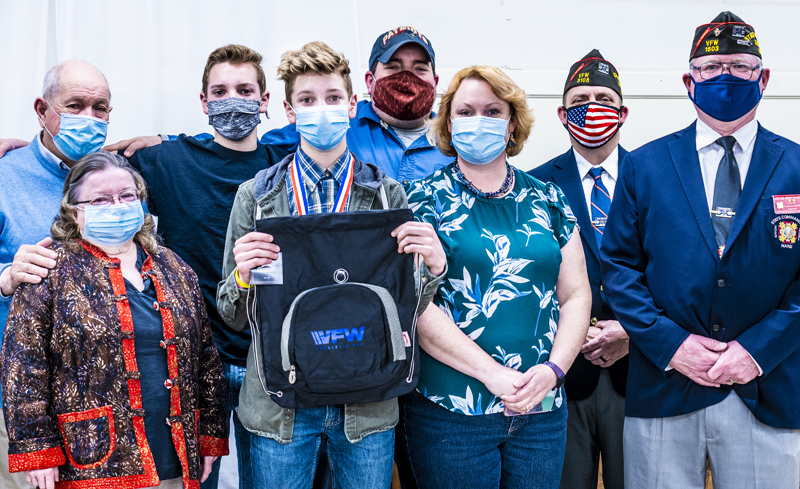 E.J. Hunt (fourth from left) poses with his family and Veterans of Foreign Wars representatives after receiving an award for his essay on patriotism at the VFW post in Waldoboro on Thursday, March 11. (Bisi Cameron Yee photo)

In one section, E.J. references both past and future as he leads the reader toward his interpretation of the essay’s theme: “There have been many battles and wars, but by the grace of God, the victory flag has always been red, white, and blue. Patriotism means not only a hope for future generations, but to me, it means freedom.”

“It’s a very important night for us; we all served overseas in areas of conflict,” said Stevens, the district commander. “We’ve all seen the standards of living there, versus what we have in this country.

“We have a desire to continue to serve and enjoy the camaraderie of fellow vets. This is our most important program. We have a track record in our district. It’s a big thing in Waldoboro.”

“I’m waiting for the competition between the two next year,” Judy Hunt, E.J.’s grandmother, said of her twin grandsons. “I’m so proud of him for the person he is. He stands strong in his beliefs on patriotism.”