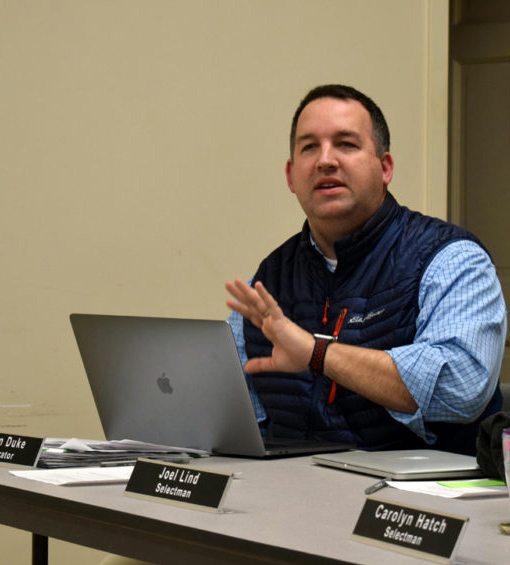 Jon Duke speaks on the change to a town manager form of government during a special town meeting at the Newcastle fire station on March 9, 2020. Duke, Newcastle’s first town manager, is leaving the town for the same job in Rockport. (Evan Houk photo, LCN file)

After five years on the job and seeing Newcastle through some significant changes, Town Manager Jon Duke is headed to Rockport, where he has accepted the position of town manager in his hometown.

Duke said during the board of selectmen’s meeting Monday, May 24 that it was a hard decision because of all the fond memories he has from working in Newcastle, but the Rockport job is something he’s “always aspired to.”

“I had such a great run in Newcastle,” Duke said.

His last day will be Friday, June 18 and he is set to start as Rockport’s town manager on Tuesday, July 6.

Duke was hired Thursday, May 20 for a three-year term with an annual salary of $101,970, the Penobscot Bay Pilot reported.

Duke was originally hired as town administrator for Newcastle in 2016. The town approved the change to a town manager style of government in March 2020, just prior to the start of the COVID-19 pandemic, which made Duke Newcastle’s first town manager.

Prior to his time in Newcastle, Duke was town administrator for the town of Hope for 10 years.

He said the town is in a great position and noted that Newcastle has “done a lot” since he took over in 2016.

“You guys are in good hands with a great staff,” Duke told the selectmen. “Honestly, I don’t worry at all about what’s going on in that office because I know everybody there is just top-notch.”

The selectmen thanked Duke for his service to the town.

Joel Lind, acting chair of the board, expressed appreciation for his engagement with the townspeople and his steady leadership.

“A sign of a job well done is leaving something better than you found it,” Lind said. “The state of Newcastle right now is in a really good place.”