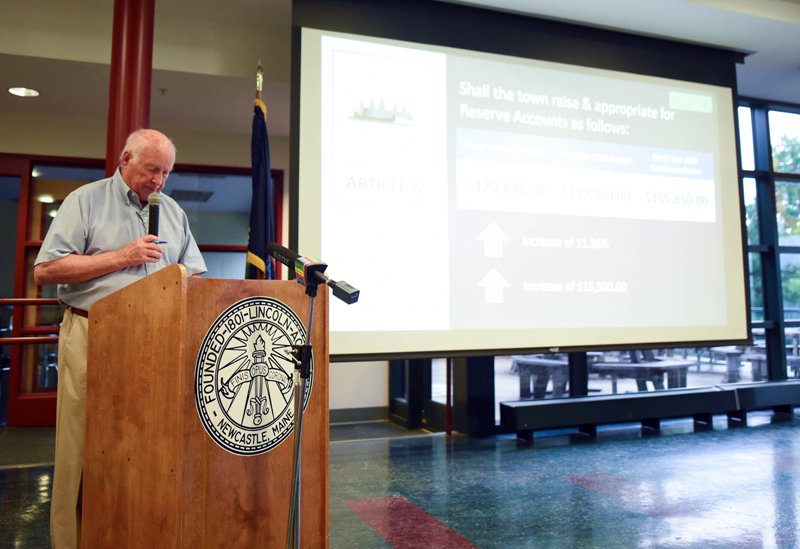 Newcastle voters approved a $1 million line of credit for roadwork, as well as the municipal budget, during annual town meeting Monday, June 18.

The town will use the $1 million line of credit for repairs to Academy Hill and North Newcastle roads.

The “roads capital projects” line of the reserves budget includes $27,000 to cover interest on the line of credit, which the town will use to repair the roads within the next two years.

The roughly 45 voters present approved all 23 articles on the warrant for the meeting with little discussion, including several articles that made up the $1,365,699.29 municipal budget, a decrease of $35,045.66 or 2.5 percent from the previous year. 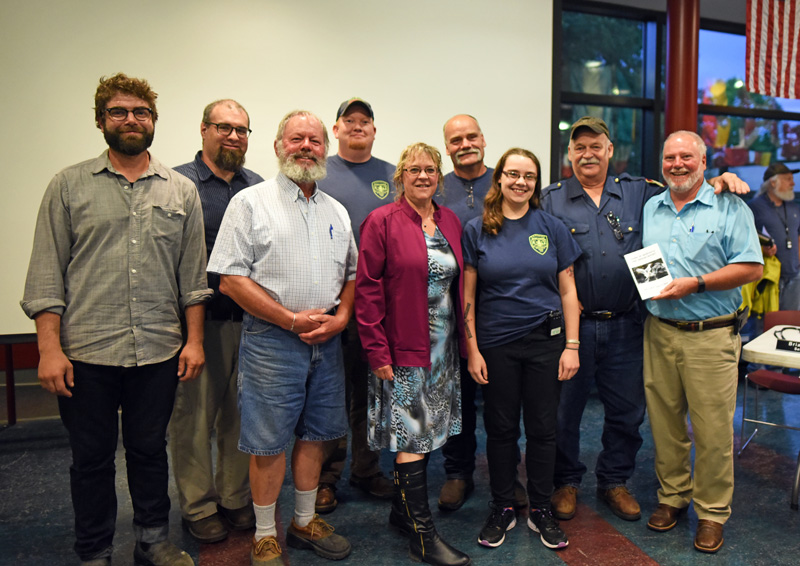 The Newcastle Board of Selectmen presents the Newcastle Fire Department with a copy of the town report, dedicated to the department for its service to the town, Monday, June 18. (Jessica Picard photo)

In another area of the budget, the computer reserve line includes $1,500 for the purchase of a 75- to 90-inch flat-screen TV and stand for the community room at the fire station. The town will use the screen for presentations and for trainings by the fire department.

At the beginning of the meeting, Newcastle Board of Selectmen Chair Brian Foote said this year’s town report was dedicated to the Newcastle Fire Department for its service to the town.

The Newcastle Fire Co. was started in 1876, and remains an independent nonprofit rather than a municipal department, Foote said.

Foote recognized Fire Chief Clayton Huntley, who has been chief since 1990 and became the town’s first full-time chief in 2009. The department currently has a full roster of 25 men and women.

“Thank you, sincerely, to all of you who drop what you’re doing when the call for assistance goes out, at times risking your lives, not for pay or notoriety, but to render selfless aid to those in need,” the dedication reads.

Foote also wanted to the make the public aware that there are vacant positions on the board of appeals, design review committee, and finance committee.

After the meeting, Selectmen Christopher Doherty and Joel Lind took their oaths of office. Both selectmen were re-elected June 12.