Hannah Sparrell, 30, a 2003 graduate of Lincoln Academy who works at Mexicali Blues headquarters in Newcastle, will enter the cage less than two years after her introduction to the sport.

Sparrell played softball in school, as well as some basketball and soccer. More recently, she started running. Before January 2014, however, she had no experience with combat sports.

“No karate, no grappling, no wrestling or anything,” Sparrell said. “My first boxing class was probably the first time I’ve ever thrown a punch in my life. I was completely green.” 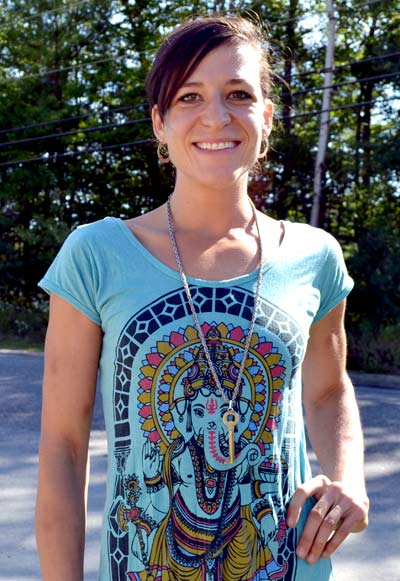 Two years ago, she signed her daughter up for jiu-jitsu training at Maine Isshinryu Karate Academies in Edgecomb.

After watching her daughter build confidence and otherwise thrive in the program, “I said, ‘I need to do this myself,'” Sparrell said.

She started jiu-jitsu training in Edgecomb in January 2014.

“I fell in love with it right away,” she said.

Her instructor in Edgecomb also teaches at First Class Fitness & MMA in Brunswick, so she started going to his classes there. She watched her first boxing, grappling, and striking classes and quickly signed up.

At first, the classes were a way to exercise and spend quality time with her daughter.

“It was a great workout,” Sparrell said. “It was something I could do with my daughter and was a great bonding experience for us. We’re able to train together.”

“It’s given me a ton of confidence. It’s pushed me past my limits. It has put me in the best physical shape of my life – at age 30, I’m in better shape than I was in eighth grade. I have met so many friends who have become a second family to me. We encourage each other. We help each other. The gym life is like no other.”

Many of the people who train at First Class Fitness & MMA and similar gyms never make the leap to competitive fighting. For Sparrell, encouragement from her training partners spurred her to accept the challenge.

The possibility of a fight would occasionally come up at the gym.

“There was a specific opponent that they had their eye on for me that used to train at the gym, and then the wheels started turning – ‘I could do this, I could do this’ – and the more I trained, the more I became interested in it,” Sparrell said.

“I have received so much positive feedback as far as training goes and my abilities that I just wanted to – I just had to – take it to the next level,” she said.

As Sparrell’s debut approaches, “I have so many mixed emotions,” she said.

“I’m totally excited,” she said. “Nervous, of course – if I was to say I wasn’t nervous that would be a lie.”

“My friends think I’m crazy,” she said. “I agree with them sometimes.”

Despite the nerves, “I do feel very confident,” Sparrell said, largely due to the quality of her training.

She now trains in Brunswick, Edgecomb, and at the Choi Institute in Portland, where her sparring partners include professional MMA fighters – mostly men.

At home, Sparrell follows a strict diet and a daily exercise routine.

“Diet is a huge aspect. I follow a paleo diet, so no grains or dairy. I eat all meat and vegetables and fruit and nuts.”

A change in Sparrell’s diet after she received a diagnosis of dairy and gluten allergies about six months ago helped move her toward the decision to fight. She switched to the paleo diet, lost 30 pounds, and gained “a huge amount of energy,” she said.

Sparrell highly recommends jiu-jitsu and MMA training to others.

“It’s a great therapy at the end of a possibly stressful day to go in and sweat and punch some punching bags and meet new friends,” Sparrell said. “I think it’s great.”

Sparrell particularly appreciates the self-defense skills she and her daughter have learned and the knowledge that “I could hold my own and know my daughter could potentially escape an attacker,” she said.

Sparrell’s daughter, Page, 11, continues to work out alongside her mother. She is a big MMA fan and has expressed interest in becoming a jiu-jitsu instructor and perhaps fighting someday herself.

“For a while I was hesitant to bring her to the fights,” Sparrell said. After much lobbying, she gave in.

An enthusiastic and knowledgeable fan, Page will join a large contingent of family, friends, and teammates to watch her mother make her MMA debut against Kira Innocenti, a rookie fighter with Young’s MMA in Bangor.

The fights start at 7 p.m., with 15 amateur and seven professional bouts on the card.

“I’ve put my life, my heart, my soul into this training and I’m really excited to represent both myself and represent my school and all my friends, teammates who have pushed me, encouraged me, carried me through this experience – I just really want to make them proud and I want to do it for them as a thank you for all the time and hard work they have spent with me,” Sparrell said.

For more information about New England Fights XIX, go to www.newenglandfights.com. To purchase tickets, call 783-2009 or go to www.thecolisee.com.