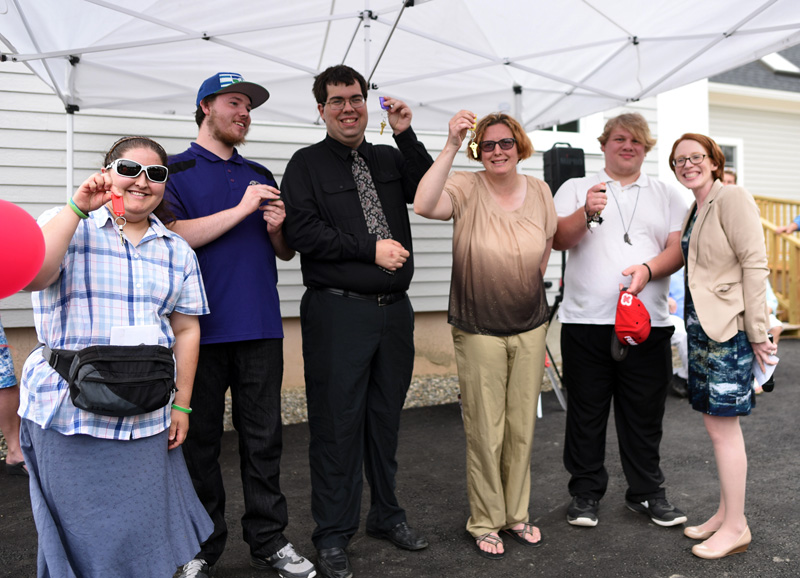 The first tenants of the Chandler House hold up their apartment keys during the grand opening Wednesday, June 27. (Jessica Picard photo)

The first tenants of Mobius Inc.’s Chandler House, on Academy Hill in Newcastle, received the keys to their apartments during the building’s grand opening Wednesday, June 27.

The building at 21 Academy Hill Road contains five apartments and will house seven adults. The tenants are clients of Mobius Inc., a Damariscotta-based nonprofit that serves people with disabilities.

The purpose of Chandler House is to provide affordable housing for Mobius clients, giving them the opportunity to live independently, according to Mobius Inc. Executive Director Rebecca Emmons.

This is their “first opportunity to launch into adulthood in a community of their choice,” Emmons said.

One of the first tenants, Dalton Kinney, 27, said he was ready to “finally get out of my dad’s house!”

A graduate of Lincoln Academy, Kinney previously lived with his father in Warren.

The building, which dates to the 1860s, needed significant work before it could be used for apartments.

Mobius Inc. named the building the Chandler House after John and Lida Chandler, who bought the house in 1919. Lida Chandler lived in the home until her death in 1964, according to Arlene Cole’s “Newcastle History” column in the May 9, 2017 edition of The Lincoln County News.

Mobius Inc. received approval to convert the building into apartments from the Newcastle Planning Board in February 2017.

Bolster Builders, a Pemaquid-based contractor, overhauled the house and demolished and rebuilt the attached barn.

The barn now has a two-bedroom apartment and a multi-purpose room.

“It was a great project,” Bolster Builders owner Leslie Bolster said, noting that the work was done in less than a year.

Bolster said she was “happy to have the opportunity to work with Mobius.”

While the living spaces are finished, there are still plans to fix up the front patio, which is original to the house, according to Emmons.

“I couldn’t be more pleased,” she said of the project.

Cody Severson, who is moving from Waldoboro to live in one of the two-bedroom apartments, said he is excited about “just being on my own.”

Severson works at Schooner Landing Restaurant and Marina in Damariscotta, and this will be his first time living independently.

Samantha Davison was similarly enthusiastic about moving into her apartment at Chandler House, saying she looks forward to “learning how to live on my own.”

Davison was also excited about being able to park her new car, a Subaru Legacy sedan, at the building.

During the grand opening, when the public could explore the apartments and meet the first tenants, speeches were given and a ribbon-cutting ceremony took place.

Damariscotta Region Chamber of Commerce Executive Director Stephanie Gallagher opened the ceremony by congratulating Mobius Inc. on the completion of the project.

“This is a dream that started over 10 years ago,” Emmons said at the ribbon-cutting.

She then passed out the keys to the apartments to each of the tenants in attendance.

The main house includes four apartments, with five tenants living in them. The first floor is fully compliant with the Americans with Disabilities Act. There is a community kitchen and dining area in an ell between the main house and the barn.

While each apartment is equipped with its own full kitchen, the community space will allow tenants to cook together and have a gathering space, Emmons said.

The barn has one two-bedroom apartment with 24/7 staffing, reserved for tenants with certain disabilities, such as blindness. There is also a multipurpose room, where tenants can take classes such as music, martial arts, and woodworking.

The tenants will form the Chandler Resident Council, which will act similarly to a homeowners association.

The rent at Chandler House will be based on 30 percent of a tenant’s income. Due to the low cost of rent, Mobius will have to raise around $25,000 a year, according to Emmons.

“We will need the community’s support,” she said.

Emmons ended the ribbon-cutting ceremony by telling the new tenants, “This is a community that stands behind you. You are welcome in this community.”

To learn more about Mobius Inc., go to mobiusinc.org.