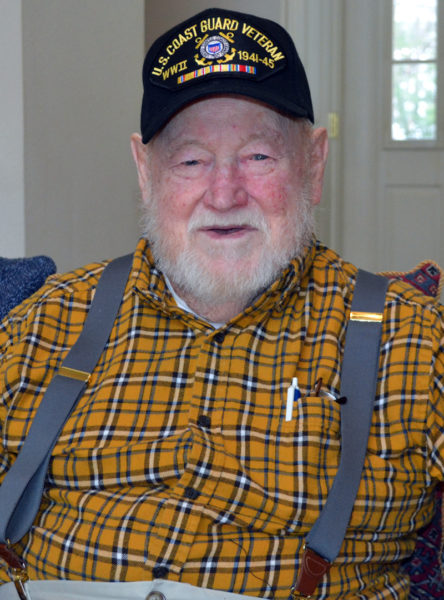 Eugene Walsh, Newcastle’s oldest resident, is celebrating his 100th birthday with a cross-country trip to visit family and friends.

Walsh moved to Newcastle in 2007 to be near family. In 2015, the Newcastle Board of Selectmen presented Walsh with the Boston Post Cane, which honors a town’s oldest living resident. At the time, Walsh was 98.

The cane now sits on a shelf in Walsh’s home on Timber Lane, as do birthday cards he’s received from friends, his doctor’s office, and his barber.

To celebrate the landmark birthday, Walsh will travel for the next two weeks to visit family and friends in places where he has lived, including Las Vegas; Mesa, Ariz.; Seattle; and St. Louis.

While in Mesa, Walsh will throw out the first pitch at a Chicago Cubs spring training game, he said.

Walsh credits his longevity to a number of factors, including growing up during the Depression.

“We didn’t know wealth,” Walsh said. “My parents, they taught us the value of working hard, and it’s stayed with me.”

Walsh’s parents also taught him the importance of not procrastinating.

“You have to stay on top of things. Don’t wait around until it’s an emergency before you start to do things,” Walsh said.