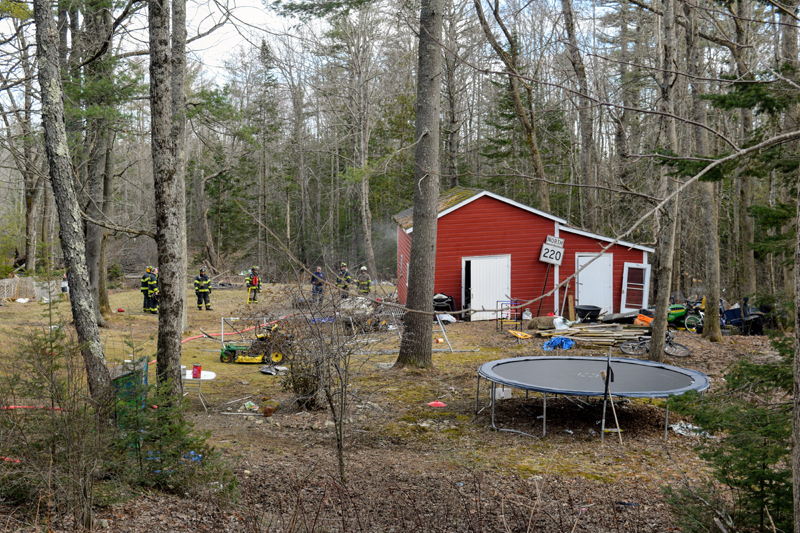 Jefferson Fire Department and nearby fire departments responding with mutual aid responded to a structure fire in a small barn at 110 Rockland Road on the afternoon of March 29. (Nate Poole photo)

“Fortunately it was discovered relatively quickly by the homeowners and we had a quick response. We responded right away,” said Morris. Twelve firefighters and one emergency medical technician from Jefferson were on scene.

He said a heat lamp coming in contact with combustible materials was the cause of the fire.

“It appears they had several heat lamps going to keep the animals and chickens warm in the cold weather,” said Morris, “and apparently one of the heat lamps fell or somehow got on the floor and the heat from the heat lamp started the hay and the straw and actually burned a circular hole through the wooden floor of the barn.

“There were about a dozen chickens in the barn at the time of the fire, and I understand they only lost one chicken, but were able to rescue the rest of the flock,” said Morris.

He said no humans were injured in the fire.

“We had a great response from our mutual aid,” added Morris. He said support from Waldoboro, Somerville, Windsor, Washington, Whitefield, and Nobleboro were on scene, and they turned around some of the mutual aid “pretty quickly.”

He said the fire was visibly under control in about 15 minutes. Due to all the combustible material, responders stayed on scene for the next two hours to ensure nothing was still burning.

Morris described it as “extensive overhaul, making sure the fire, especially going from the hay, we wanted to make sure that the fire was completely out and didn’t spread anywhere.”

He said firefighters removed a section of the floor that was damaged and “charred pretty good.” A support beam beneath the barn was also badly burned.

Morris said they used thermal imaging cameras and threw a lot of water to make sure everything was cooled before they left.