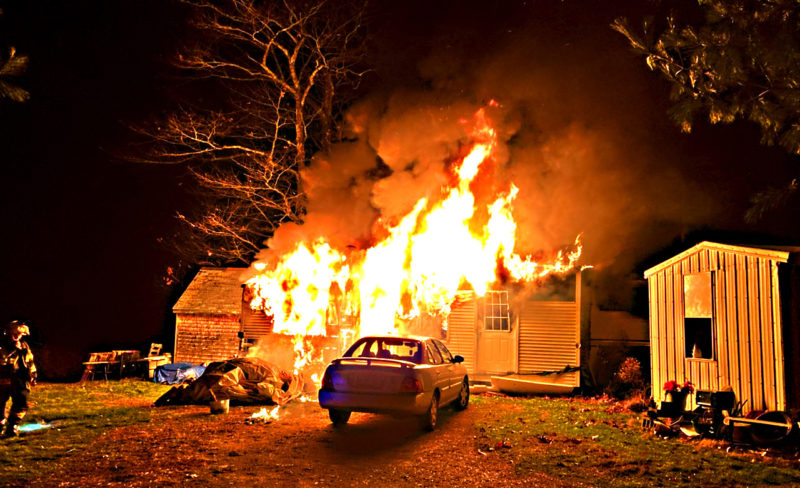 Flames tear through a home at 391 North Nobleboro Road in Waldoboro, Wednesday, Nov. 18.

Waldoboro resident Viola Stone lost her home and possessions in a fire at 391 North Nobleboro Road the night of Wednesday, Nov. 18.

Waldoboro Fire Chief Paul Smeltzer said that while there were no injuries, the fifth-wheel camper and addition where Stone lived were a complete loss.

Stone reported the fire at 9:04 p.m. and when Smeltzer arrived, he saw “heavy fire” coming from the addition at the front side of the home. Within minutes, the fire spread into the camper portion and the home was fully involved before the first truck arrived.

Smeltzer said the fire started in the area of a wood stove, which was in use at the time. The fire was ruled accidental.

Smeltzer said the fire started in the area of a wood stove, but the cause is under investigation. “All things point to it being an accident,” he said.

Ice and the power supply to the house both posed challenges to firefighting efforts.

“This was our first fire as we approach winter,” Smeltzer said. “There was icing on the road from the trucks.”

He said that “the icing did not impact the response, but the pump operators of the engines and tankers had to use caution while walking on the scene.”

He reported a 25-minute wait for Central Maine Power to disconnect power, saying “the wait for CMP only delayed access to one section of the property during our suppression efforts due to arcing power lines connected to the structure overhead. It was for the firefighters’ safety that I did not allow them to attack the fire from that angle until power was disconnected.”

Several units had to respond as the fire spread into nearby brush and woods, but they “got to it pretty quickly and were able to prevent it spreading too far,” Smeltzer said.

The fire department will compile interviews with witnesses and revisit the scene before completing a report.

North Nobleboro Road was closed until the scene was cleared at 11:30 p.m. Waldoboro Public Works salted the road before it reopened to traffic.

Stone’s granddaughter, Alissa Geis, has set up an online fundraiser for her at tinyurl.com/y68ae3lq. As of the morning of Monday, Nov. 23, the effort has raised $5,270 from 63 donors.

Stone lost her car and pets in addition to her home and other possessions, according to the GoFundMe page. Her family is getting her clothes and other basic necessities, and Geis said they have found a car for her. But she will need a new home.