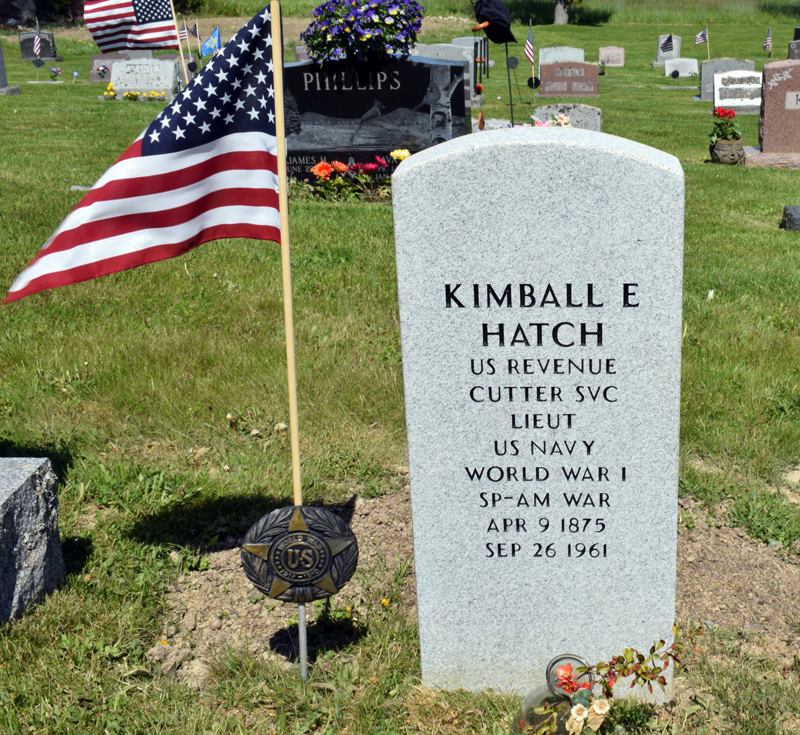 An American flag and a World War I medallion decorate the grave of Lt. Kimball Edward Hatch in Hillside Cemetery, Damariscotta. Local researchers identified Hatch and arranged for a new headstone after learning of his unmarked grave. (Evan Houk photo)

Local researchers recently uncovered the identity of a veteran of two wars buried in an unmarked grave in Damariscotta. On the Thursday before Memorial Day, they dedicated a new headstone at his grave.

“Without the LCN archives being searchable online, those mysteries could not have been solved,” Damariscotta Cemetery Trustee Patti Whitten said Thursday, May 21, during the dedication of a U.S. Department of Veterans Affairs headstone for Hatch.

A small group of people involved in the effort attended to witness the dedication.

Whitten said the search began in mid-October 2019, when the cemetery trustees received a previously unseen list of burials in Hillside’s Annex 1 from Natalie House.

House is the daughter of Edna Genthner, who collected information on Damariscotta’s cemeteries in the mid-1900s. She found the papers while sorting through her mother’s files.

The list of burials contained the name of someone the trustees were unaware was buried in the annex: “Kimbale Hatch.”

According to Whitten, in addition to the misspelled name, the record did not give a date of birth or death. Hatch could have been a middle or last name, and the placement of the plot made it appear that the person could have been part of the Wilson family, buried in the same area.

Whitten said these factors made it difficult to find a definitive answer as to the person’s identity.

But she looked anyway. After trying several search terms in the LCN archives, Whitten discovered a July 1947 column by Damariscotta Mills correspondent Faith Jones that identified Kimball Hatch as a man from New York who was “boarding at Mrs. Mary Linscott’s.”

Hatch’s true name led to the discovery of a 1963 probate notice in the LCN archives. Records at the Lincoln County Registry of Probate gave the correct death year of 1961.

Once the correct death year was known, Hatch’s obituary was discovered in the LCN archives. For the first time, researchers learned that he was a veteran.

A headstone was ordered from the VA after none was found underground and no record of a stone being ordered for Hatch was found at what is now Strong-Hancock Funeral Home, where he was taken upon his death.

The week of May 11, Damariscotta Road Commissioner Hugh Priebe and public works employee Eddie Parlin set the foundation for the headstone and it was then installed in its rightful place.

With the help of Kathleen Maclachlan, staff genealogist at Skidompha Library; the Ancestry.com Library Edition; and the LCN archives, Whitten gathered more details about Hatch and his life.

One of Beryl Hunt’s “Bunker Hill” columns from a 1989 edition of the LCN mentioned that Hatch was not absent a single day during the eight-week fall term of 1882.

Hatch spent most of his life at sea as a boiler operator, possibly since the time he was 15 years old. On an application for a Seaman’s Certificate of American Citizenship in 1918, he said he had been a seaman since 1890.

According to Whitten’s research, various crew lists describe Hatch as 5 feet, 7 inches tall; 150 pounds; and having a fair complexion, with light hair and blue eyes.

Hatch joined the U.S. Revenue Cutter Service, a precursor of the U.S. Coast Guard, as a chief oiler on Nov. 12, 1897. He served aboard the USS McCulloch during the Battle of Manila Bay in the Spanish-American War.

He continued his military service in the National Guard until he joined the U.S. Navy on June 13, 1918 to serve in active duty during World War I. He was promoted to lieutenant on July 18, 1918 and honorably discharged from the Navy on Sept. 30, 1921.

Hatch spent the rest of his career as a boiler operator, or what was referred to in that time as a fireman or engineer, sailing along the East Coast of the U.S. and south to the Caribbean and West Indies.

When he came ashore in the 1930s at around age 60, Hatch worked as a hospital fireman, or boiler operator, in Queens, New York City.

By 1947, Hatch, then in his 70s, was boarding with Mary Linscott in Damariscotta Mills.

Records show that Hatch bought property along Damariscotta Lake, where he kept a boat and was known to go fishing most days. He was a member of the Bryant-Simmons VFW post in Damariscotta and was elected chaplain in 1952.

In 1961, after being in and out of various nursing homes for five months, Hatch died of cancer at Sunny Acres Nursing Home in Bristol. He was 86.