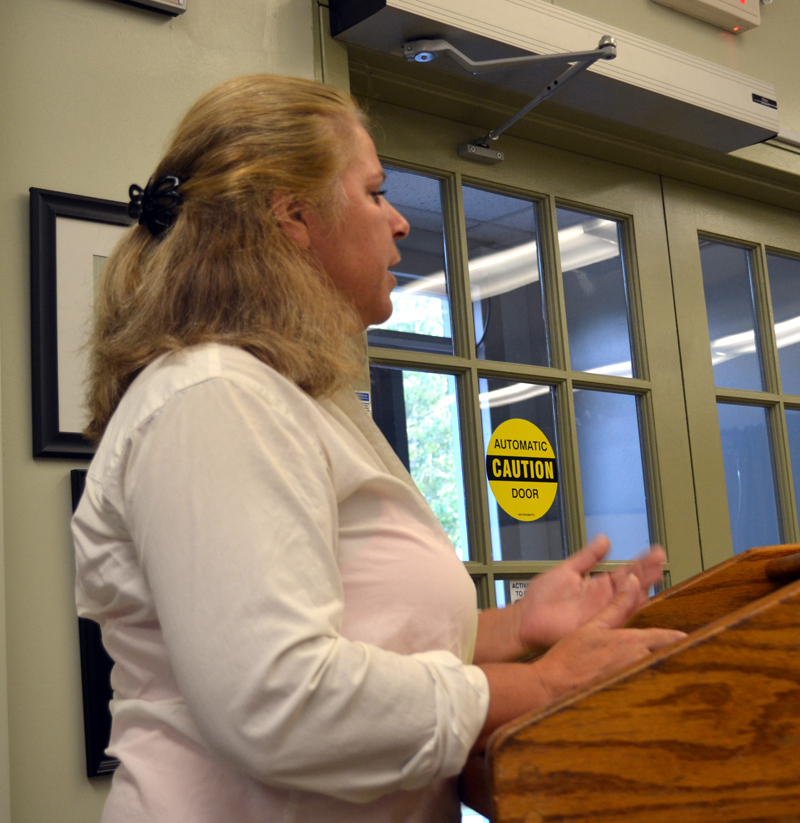 Lucinda Tilas addresses the Wiscasset Board of Selectmen on Aug. 22. (Abigail Adams photo)

The Wiscasset Board of Selectmen, on Tuesday, Aug. 22, voiced approval for business owners’ efforts to contract the Lincoln County Sheriff’s Office for the job.

The Lincoln County Sheriff’s Office, however, does not have the staff to fill the private detail, Chief Deputy Rand Maker said.

The town looked into private contractors, but was not able to find any that provide the service, Town Manager Marian Anderson said.

Lucinda Tilas, an administrative assistant at Chesterfield Associates, reached out to the sheriff’s office to see if deputies could be hired for a special detail on Labor Day weekend. Chesterfield Associates President E. Davies Allan “wanted to offer what he could to provide traffic relief on another busy weekend,” Tilas said.

Tilas was told four or more deputies would be needed to handle the traffic detail for the hours requested, she said.

A traffic detail in downtown Wiscasset is “a different animal” due to the heavy pedestrian and vehicular traffic and the four-way intersections, Lange said. Special training is required and additional manpower is needed to safely direct traffic.

The sheriff’s office was upfront about the possibility that it would not have the staff to work the detail, but it was worth a try, Tilas said.

“It used to work well” when guards were posted downtown a few years ago, she said.