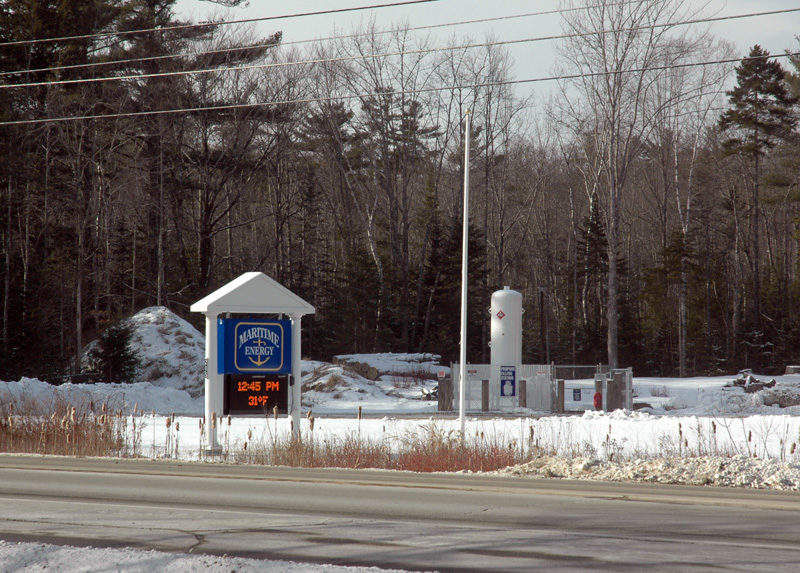 The Nobleboro Appeals Board has unanimously denied an appeal of the Nobleboro Planning Board’s approval of an application to install a 30,000-gallon propane tank at the company’s facility at the corner of Route 1 and Vannah Road. (Alexander Violo photo)

The Nobleboro Board of Appeals unanimously denied an administrative appeal of the Nobleboro Planning Board’s approval of an application to install a 30,000-gallon propane tank at Maritime Energy’s facility at the corner of Route 1 and Vannah Road.

After hearing presentations from attorneys for both sides and reviewing all eight points of the appeal, the board of appeals examined and subsequently denied each point individually prior to denying the appeal as a whole.

Rockland attorney Stephen Hanscom represented Maritime Energy, as he did throughout the planning board process.

The lead appellant listed on the administrative appeal was Susan Weiser Mason, of Nobleboro.

The appeal stemmed from the Nobleboro Planning Board’s Oct. 27, 2016 approval, with conditions, of an application from Rockland-based Maritime Energy to install a 30,000-gallon propane storage tank.

In her opening remarks, Williams said she cut down the initial eight points of the appeal to six points in her memorandum.

“They are generally about procedural issues as well as a lack of evidentiary support for certain findings,” Williams said.

Williams said the issue of completion was a key component of the appeal, contending Maritime Energy’s application was not complete in that it was missing critical information regarding certain standards. For example, it did not include a fire safety study.

Williams said the planning board erred in finding Maritime Energy’s application complete as of Aug. 15.

“The date of completion was way early in the process. Critical information was not in the record at that time,” Williams said.

Williams also contested the planning board’s classification of the project as light industrial.

“There is insufficient evidence on or up to Oct. 6 to conclude it’s light industrial use,” she said.

“The letter to the abutters did not mention that there would be meetings that could be attended,” Williams said.

In his opening remarks, Hanscom said the planning board had been thorough in its research and deliberation, holding a public hearing at Nobleboro Central School and several other meetings  before approving the project.

“There were six meetings before the planning board and many lasted two hours or more … The planning board exhaustively reviewed, for hours, the issues that were brought before them in the consideration of this project,” Hanscom said.

Hanscom said the project is a permitted use under the town’s land use ordinance and the type of equipment to be used is consistent with the characteristics of a retail fuel distribution facility.

“The planning board did not err in determining the use was permitted and that it was a retail fuel distribution facility. The planning board determined there was no extensive heavy equipment to be used at the facility,” Hanscom said.

The appeal also states that the facility’s operations will constitute a large-scale development as defined in the town’s ordinance, but Maritime Energy’s application does not acknowledge or describe how it plans to meet the requirements for such a development and the company failed to provide abutting property owners the notice required under the town’s land use ordinance.

The appellants asked the appeals board to reverse the planning board’s decision, thereby denying the application to install a propane tank.

Alternatively, the appellants asked the appeals board to remand the application to the planning board for further consideration, including reopening the record for additional submissions and holding another public hearing.

Moreover, the appellants asked that the planning board be required to accept the guidance in the National Fire Safety Analysis Manual requiring the town’s fire department to conduct, at Maritime Energy’s expense, a timed drill to deliver the needed water supply to the site of the propane tank using the normally responding complement of personnel and equipment.

Following the denial of the citizens appeal, the only recourse for the appellants would be to appeal to the Lincoln County Superior Court.