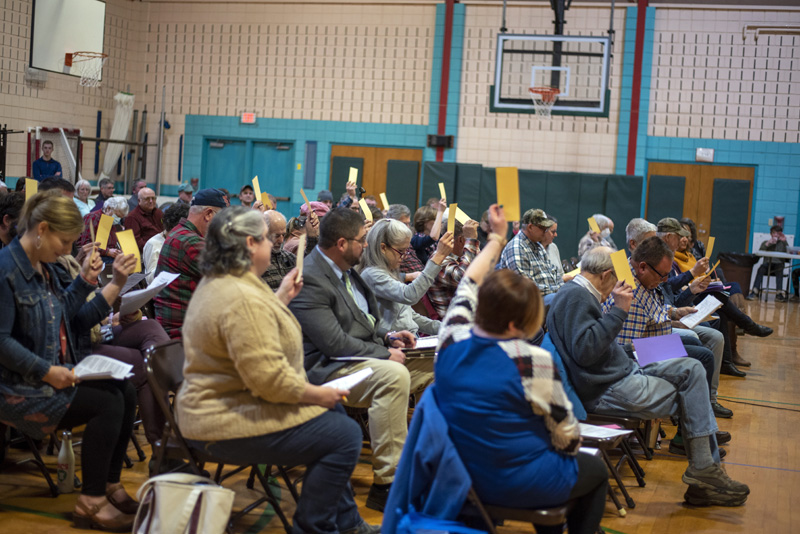 Nobleboro residents hold up yellow pieces of paper to vote during the annual town meeting at the Nobleboro Central School on March 19. (Jessica Picard photo)

Whether to use a portion of the town’s American Rescue Plan Act funds to install an electronic sign at the town office, a hike in ambulance costs, and the possibility of increasing funding for the town’s fire department were main topics of discussion during Nobleboro’s annual town meeting at the Nobleboro Central School on March 19.

During the roughly two-hour meeting about 70 voters approved 35 articles, including the $1,203,519 municipal budget and $4,239,948.86 education budget. Despite increases in both budgets, Board of Selectmen Chair Richard Spear stated that he does not anticipate an increase in property taxes due to receiving increased funding in other areas, such as school funding from the state.

Residents took the selectmen’s recommendations to lower appropriations for outside agencies by a total of $5,039, approving a municipal budget totaling $1,203,519, an increase over last year by $69,280 or 6.12%.

The reduction in appropriations included eliminating a $500 funding request for Coastal Kids, limiting Spectrum Generations to $1,346 of a $2,285 request, and reducing funds that support the Skidompha Library from a requested $20,000 to $16,400.

After questions on how the town’s cost for the Central Lincoln County Ambulance was calculated, voters approved the requested funding to the CLC Ambulance of $74,238, a $45,583 or 159.08% increase. The cost is currently calculated using the town’s valuation and call volume. A decrease in revenues over several years, as well as the necessity for competitive wages and benefits for paramedics and emergency medical technicians, are driving factors in the increase.

“If you are paying attention to the cost of ambulance services in the area, we’re getting a pretty good deal, and I support it,” Selectman Richard Powell Jr. said.

In a later article, voters also agreed to allow the select board to negotiate and execute an interlocal agreement covering the future governance of CLC Ambulance. Nobleboro is one of the service’s six founding towns, along with Bremen, Damariscotta, Newcastle, Bristol, and South Bristol, and has a voice in how it is funded.

Entwined with the ambulance discussion was consideration of the amount of funding going to fire department operations, which was recommended to stay flat to last year at $147,515. Before approving the article, which also included the appropriation of $30,000 to fund the fire truck capital account, residents heard from the president of the Minnehata Fire Association, Captain Aaron Bradbury, and Senior Captain John Hedrick.

Citing aging equipment and outdated medical supplies, Bradbury advocated for finding a way to increase the fire department’s budget by $21,000.

“The proposed budget for the fire department at this time is good for covering our operating expenses, but it is not going to be enough to cover needs for replacing some of our equipment, in particular some EMS equipment,” he said.

“The fire department is actually at a critical point with our equipment…We’re kind of at a standstill as a department,” Hedrick added. “We’re barely even meeting our basic needs to serve the citizens.” 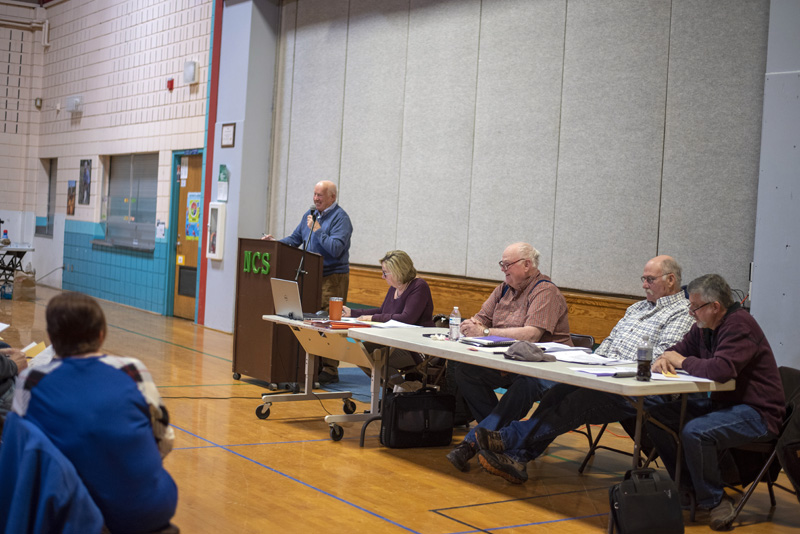 While the budget item could not be increased at the town meeting, Powell suggested that the fire department create a proposal that could be voted on at a special town meeting.

The project that garnered the most discussion was the installation of an electronic sign, which Spear stated was estimated to cost $25,000. After much discussion where some residents stated that they would prefer to see those funds go to other initiatives such as broadband or the fire department, a motion was made to remove the electronic sign from the article. The motion passed, and then the article passed as amended.

Spear assured voters that there are ARPA funds that have not yet been designated, and residents would have more opportunities to have their suggestions heard.

According to Town Clerk Susan Pinnetti-Isabel, 176 voters turned out at the polls on March 18 to vote for municipal officers.

Current Selectman Jon Chadwick, who ran unopposed, was re-elected for a second three-year term as selectman, assessor, overseer of the poor, and fish committee member.

Robert “Bobby” Whear, also unopposed, was re-elected for another two-year term on the board of trustees for the Great Salt Bay Sanitary District.

There were no candidates on the ballot for two three-year terms on the Nobleboro School Committee, with current chair Angela White and committee member Shawna Kurr originally not seeking reelection. White, however, agreed to serve another term and was re-elected with 24 write-in votes. Matt Benner was elected to the second position with 25 write-in votes.

During the town meeting, seven members of the Budget Committee were selected from the floor.