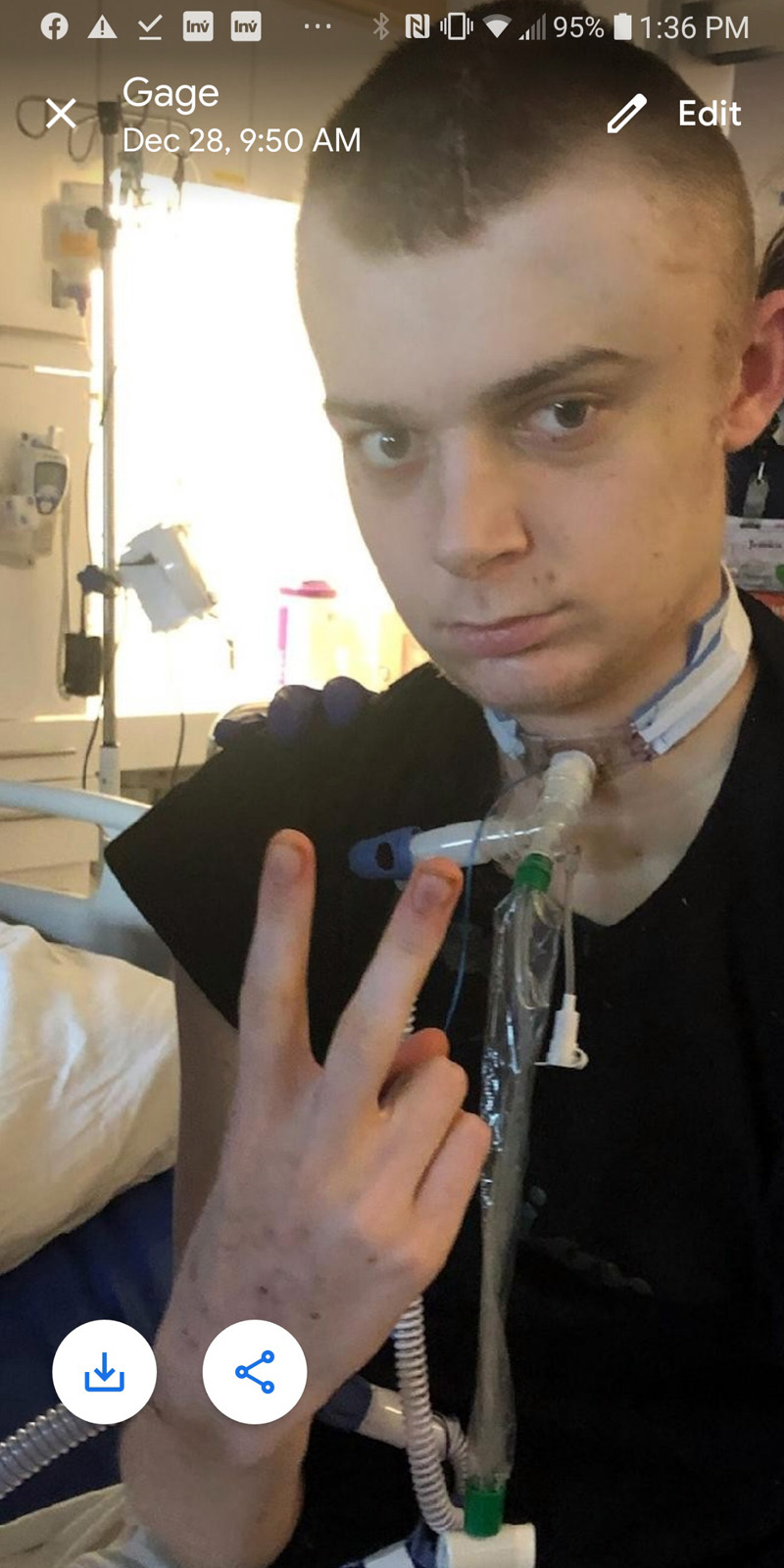 Gage York flashes a peace sign from his hospital room at Maine Medical Center in Portland on Dec. 28. York was in critical condition for almost two weeks after a Dec. 8 crash. (Photo courtesy Mary York)

Gage York, the Nobleboro teenager who suffered critical injuries in a December crash, is now awake and talking, according to his grandmother.

Gage York is in fair condition at Maine Medical Center in Portland, improved from critical and then serious condition, according to the hospital.

His grandmother, Mary York, said by phone Tuesday, Jan. 5 that her grandson is confused, but nurses “had him up trying to walk yesterday.” She described a photo showing “this tall, skinny kid towering over two small nurses as they helped him try to stay on his feet.”

Gage York has had multiple surgeries as a result of his injuries from the Dec. 8 crash, which included head trauma and multiple open fractures. Mary York said his left arm and leg were impacted, and an ophthalmologist has been called in to consult on damage to his left eye. She said he has lost 20 pounds since the crash.

According to Mary York, doctors performed a craniotomy, removing a portion of bone from his skull in order to place pressure monitors in his brain.

“They have taken those out but have not yet replaced the bone plate,” she said. “They can’t do that until all the swelling is down.” Her grandson now wears a helmet any time he is upright. “It would be very damaging for him to fall,” Mary York said.

Gage York’s parents want him to go to the Spaulding Rehabilitation Hospital in Boston, the teaching partner of the Harvard Medical School Department of Physical Medicine and Rehabilitation. U.S. News and World Report ranks the hospital second among U.S. rehabilitation hospitals.

Mary York said the family has been told that Spaulding is the best place for a person of Gage York’s age with a brain injury, but their insurance company has denied coverage.

The family is appealing the decision. “It’s a waiting game at this point,” Mary York said.

Mary York said Gage York’s parents have told him about the crash, but he does not yet fully comprehend what happened. “He doesn’t understand why he can’t just get up,” she said.

Since he has been moved to the pediatric ward, Mary York said that her grandson’s parents can now visit him every day. “That’s been a huge help, giving him continuity in his life,” she said. “But he told his mom he wants to come home.”

Mary York was finally able to receive a phone call from her grandson. His parents held the phone for him. “I cried — it was nice to hear him. It sounded like him,” she said.

“He always loved brownies. I used to send them in care packages, so I sent him up some brownies,” Mary York said. “And he called to thank me and to tell me that he loved me.” 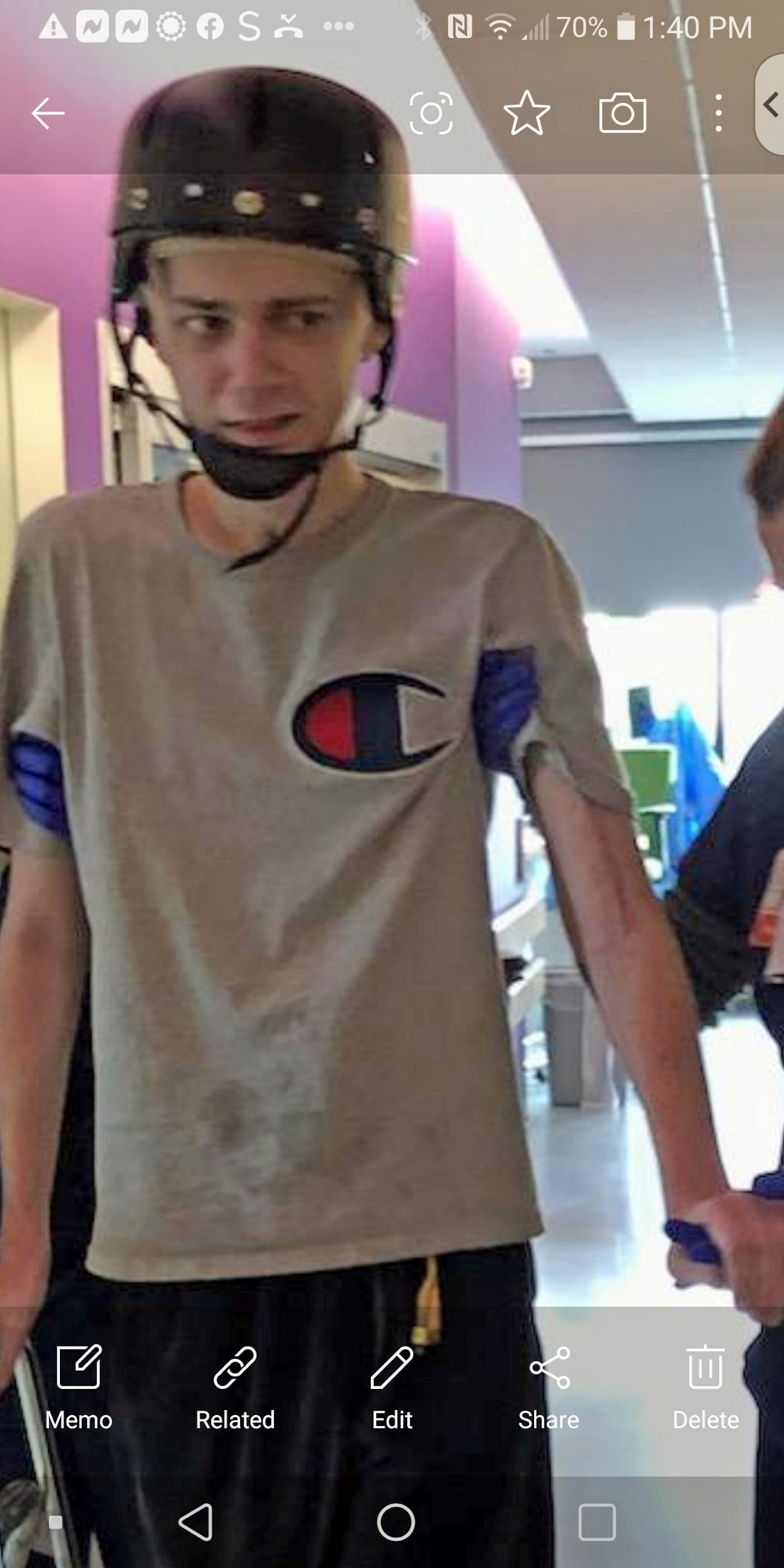 Gage York stands with help from a staff member at Maine Medical Center in Portland. He must wear a helmet every time he stands or walks to protect his brain from further trauma. (Photo courtesy Mary York)

Mary York emphasized how thankful she and the York family are for the good wishes, prayers, and support of the community. “The power of prayer and positivity is very strong,” she said.

“He’s ahead of where they thought he would be,” she said. “It could so easily have been a different story.”

Mary York has set up a GoFundMe page to defray costs associated with her grandson’s hospitalization and recovery. The page has raised $17,543 toward a $100,000 goal as of Tuesday. Donations can be made at gofund.me/6e64fdaf.