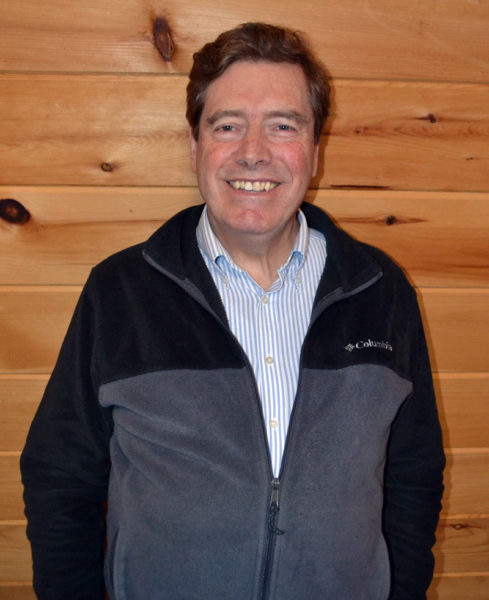 During a career spanning more than three decades, Dr. Allan “Chip” Teel has been able to experience multiple sides of the health-care industry, including as a primary-care physician and a co-founder of seven home-like assisted-living facilities in Lincoln County. Now, in his new role as Eastern Maine Health Systems’ medical director for clinical systems innovation, Teel, of Nobleboro, hopes to fulfill his mission to improve the way society cares for its elders.

The origins of Teel’s medical career date back to his time as a student at Dartmouth College in Hanover, N.H. During his junior year, Teel, a history major, was student-teaching at an elementary school in Compton, Calif. The adviser of his program was an OB-GYN who worked at a local hospital. The two grew close, and occasionally Teel would join him at the hospital and volunteer wherever needed.

“At the time, I was a liberal arts major. I was well into my program and I didn’t want to change my major and have to stay in school for a number of years,” Teel said. “But medicine was very fascinating to me, and the experience stuck with me.”

After graduating from Dartmouth in 1973, Teel taught elementary school. For a time, he taught grades four through eight in a two-room schoolhouse in northwestern Maine.

When he became dissatisfied with the way the school district was being run, he decided to leave his job and run for the school board in an effort to make a difference.

“If I wanted to be on the school board, I couldn’t be a teacher,” Teel said. “I felt I could do more good for more people on the board, and so I made the decision to run and was elected.”

It was then Teel began to consider the possibility of returning to school to pursue a career in medicine.

“At that point I had been out of school long enough that when I went back, it was fun. I was at a point where I was eager to get back in the classroom. I enjoyed learning, and as a 30-year-old instead of a 20-year-old, I was a better student,” Teel said.

With the support of his wife, Carol, Teel returned to school. He attended the University of New Hampshire in Durham for pre-med before earning his medical degree at the University of Vermont Medical College in 1985.

After completing a residency at Lancaster General Hospital in Lancaster, Penn., Teel searched for a small town where he could practice medicine and his two children could grow up. Another important factor was the family’s wish to return to Maine, where Teel had taught and his family had spent summers while he was growing up.

The Teels moved to Lincoln County in 1988 and Teel became a family physician in Damariscotta.

“Family medicine is a wonderful job, and I feel very lucky to have been able to practice in a small town like Damariscotta,” Teel said. “When you’re starting to deliver the babies of the people you delivered, you’re a true family doctor, and I have had the privilege to be that person for some of the people in this community.”

While practicing family medicine, Teel also began his work in the field of elder care. In 1998, he co-founded the ElderCare Network of Lincoln County, a network of residential care facilities providing “home-like living” with locations in Boothbay, Damariscotta, Edgecomb, Jefferson, Round Pond, Waldoboro, and Wiscasset. The homes are also known as “the Greens.”

The idea behind the ElderCare Network was to provide low-income individuals with an alternative to nursing homes. The Greens are almost entirely dependent on government funds, though they also receive some private donations. While other private facilities may charge residents anywhere from $6,000-$8,000 a month, the ElderCare Network receives approximately $2,500 a month per resident, Teel said.

Funding is only one problem facing elder care, Teel said. According to an AARP survey, 90 percent of senior citizens want to stay in their home or in a place similar to their home as they age.

“It was a strong sentiment 20 years ago, and it’s even stronger now,” Teel said. “People do not want to leave their home, so why should we force them to?”

There is a certain “dignity of risk” that everyone should be provided, including elders, Teel said.

“We must give everyone the opportunity to live their life, and naturally, with that living, comes risk,” Teel said. “Just because a person is 95 does not mean their life needs to be reduced to making sure they take their pills on time. They need to have the opportunity to succeed or fail on their own.”

Faced with the knowledge that “business as usual” was not what people wanted, Teel founded Full Circle America, a company that helps elders stay in their homes longer. The company’s headquarters are on Teel’s property in Nobleboro.

The attitude of the patient and the patient’s “circle of caring,” the supportive network made up of family, friends, neighbors, and others, are essential to the success of the program, Teel said.

In addition, family members have unlimited access to check on their loved ones whenever they like, which helps provide peace of mind, Teel said.

Technology also allows Full Circle America to institute telemedicine, which has been “groundbreaking,” Teel said. Doctors can meet with the patients through a webcam and ask the patient to check his or her own vital signs.

Telemedicine has multiple benefits for the doctor, the patient, and the patient’s support network, Teel said. The patient gains self-esteem by taking an active role in his or her health care. In addition, a patient does not need to leave home or be transported by a family member or friend to a local health care provider.

“I’ve been told it’s better than an office visit,” Teel said. “Patients are saying they feel less rushed, it’s more convenient for them not having to arrange for transportation, and they feel they’re being provided better health care.”

“I can’t give you a flu shot or remove a mole over webcam, so primary care is still needed,” Teel said.

Throughout his career, Teel has received recognition for his work in evolving care for the elderly. Most recently, Camden National Bank presented Teel with a 2016 Leaders and Luminaries Award for his “founding and dedicated leadership” of ElderCare Network of Lincoln County.

Teel has spoken about his work across the nation. It was after one of his presentations that he was approached by Eastern Maine Health Systems, a health care system made up of providers across the state.

Teel was offered the opportunity to join Eastern Maine Health Systems as the medical director for clinical systems innovation, allowing him to bring a comprehensive elder care model to the organization, he said.

Although the new role will help Teel shape elder care on a larger scale, the move has also been “bittersweet” as Teel had to leave Full Circle Family Medicine, the medical practice he co-founded with Dr. Denise Soucy and Dr. Minda Gold in Damariscotta in 2003.

“When we founded Full Circle Family Medicine, the goal was to help primary-care doctors and patients have a stronger relationship,” Teel said. “We were focused on providing patient-centered, community-based primary care, and we tried to approach it with a good attitude, and a generally good sense of humor.”

“We very much wanted it not to feel corporate, but to feel authentic, and I think we were able to accomplish that,” Teel said. “I’m very proud of what we accomplished.”

Teel said he is eager to apply his knowledge in an effort to improve the health care system for elders.

“Back when I was in med school, it felt apparent to me that many doctors were retiring when they had so much more to offer as far as knowledge in the field,” Teel said. “And now I’m at the point where I need to put that to the test. I’ve been a doctor for more than 30 years, and now I have the opportunity to guide what’s coming next.”