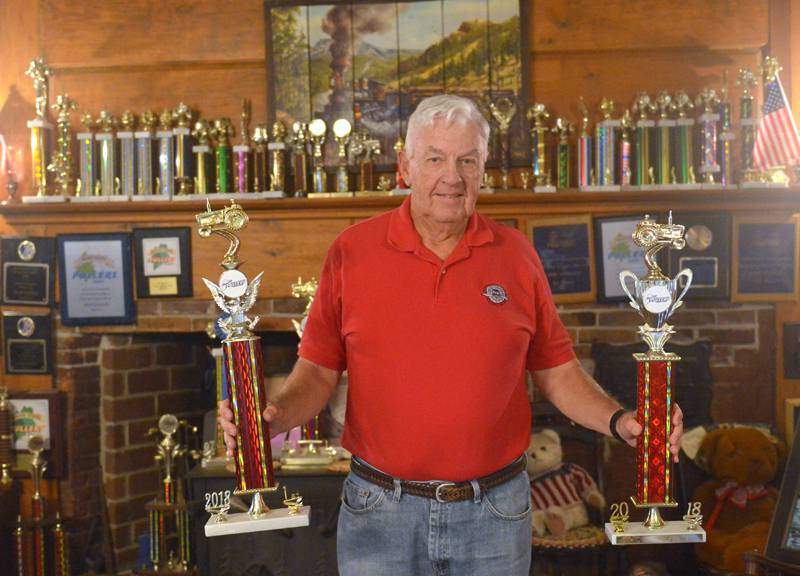 Nobleboro septuagenarian Jack Studley has made quite the name for himself on the tractor pulling circuit at Maine fairs. In 2018 he won two point series championships. So far this season, he has taken first at the Skowhegan and Windsor fairs.

“I should have had more weight in the front,” Studley said of his front tires lifting off the ground during his third-place 7,500-pound run.

Studley came to tractor pulling in a roundabout way. He served two tours of duty in Vietnam as an air intelligence officer aboard an aircraft carrier. He left the military in 1971 and earned a degree at Boston University in aeronautical and astronautical engineering, then a master’s degree at Boston College in educational research and evaluations. He went on to teach physics and aviation science in a high school in Massachusetts.

“So how did I end up pulling tractors?” Studley said.

He met his wife, Grayce, in Massachusetts, and she introduced him to Maine and farming. She brought him to her family farm in Nobleboro, where she represents the seventh generation to live on the land.

Their house, the James Hall House, was built in 1791 and moved over the ice on Damariscotta Lake from Waldoboro. It has five fireplaces with a hidden room between two of them. The story handed down through the generations is that the room was used to hide runaway slaves.

Twenty-three Hall descendants served in the Civil War, including Capt. James A. Hall, who fought with Joshua Chamberlain at Gettysburg.

The property was used as a girls camp, Makaria, in the 1930s and ’40s. Chimney Farm, the home of the late Maine writers Henry Beston and Elizabeth Coatsworth, was once part of the property.

While working in Massachusetts, the Studleys came to the family farm every chance they had. They moved to Maine in 1989. He took a job as a stockbroker and she taught English as a second language in Portland. Later she served on the state’s civil rights team. She was invited to the White House by George H.W. Bush, which led to 10 years traveling around the country teaching teachers.

Jack Studley is a prize-winning photographer and took best of show at Bangor Fair the first year he entered.

While showing horses at fairs, he became interested in tractor pulling. He was looking over someone’s tractor at Clinton Fair when he was asked if he wanted to buy it. He said yes, and thus began his love affair with tractor pulling.

He started pulling tractors in 1997. Seven years ago he quit the sport, but a year later he was back at it.

“It’s an obsessive compulsion thing. I took a year off and started (up again) with the Super M,” Jack said. He now competes in the stock division with a 46-horsepower 1954 International Super MT-A.

On his first pull at Windsor, he had one tire sink in the mud. On his second run, he raced up the right side on drier ground to capture first place. “The surface of every track is different,” he said.

While pulling the drag down the track, he pushed his chest forward against the steering wheel as hard as he could. 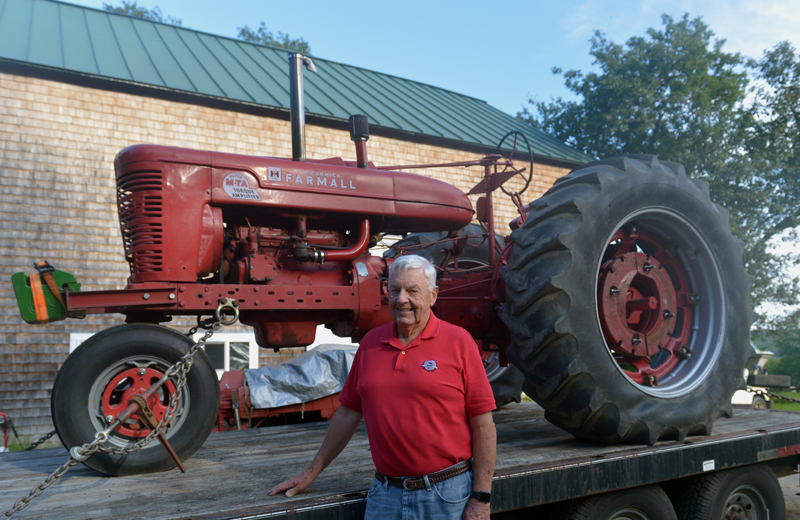 “When the front goes up, the draw bar goes down and puts all the weight on the draw bar. It makes a couple of feet difference in the length of your pull,” he said of keeping all four wheels on the ground.

During his winning run at Windsor, one tire started to spin. He hit the brake so his tire would gain traction again. “You try to get every foot you can,” he said of this trick of the trade.

Studley cuts his tires to a half-inch of tread to increase traction. “I used to pull with the Maine Antique Tractor Club with regular tires. Regular tires start to spin and you sink in the ground,” he said of why he trims the treads.

“I ran a low tire pressure last night. When I left (home) I was at 7 (pounds per square inch), but I was at 6 psi when I got (to the fair). I ran a pound softer than I usually do and it worked out,” he said of his rear tires, which looked like they were going flat.

During pulls, a tractor pulls a drag where a weight progressively moves forward, making it harder and harder to pull.

While he has just one pulling tractor left, he owns 10 tractors. “He needs one to mow, one to tether, one to rake, and one to bale,” Grayce said.

Jack does all the maintenance on his tractors and other farm equipment. He puts his physics and engineering background to good use when setting  up his tractor for a pulling run.

“There is a lot of science to it. We are competitive by nature,” Grayce said.

“She is a supporting wife. Not only does she come, but she watches the competition and reports back what they are doing,” Jack said.

“It is a great, friendly group. Your closest competitors will come over to help. There is a lot of camaraderie. It is fun,” Grayce said.

The Studleys say working on their farm keeps them young. Tinkering on his tractors keeps Jack’s mind working. “I think that’s what keeps me going,” he said of farm chores like haying.

He has attended several reunions lately and is shocked by the number of people in his age group using canes and walkers. “I’m going to fight that,” he said.

He has a unique take on tractor pulling. As he tells summer visitors in his best Maine accent: “Tractor pulling is cultural enrichment.”