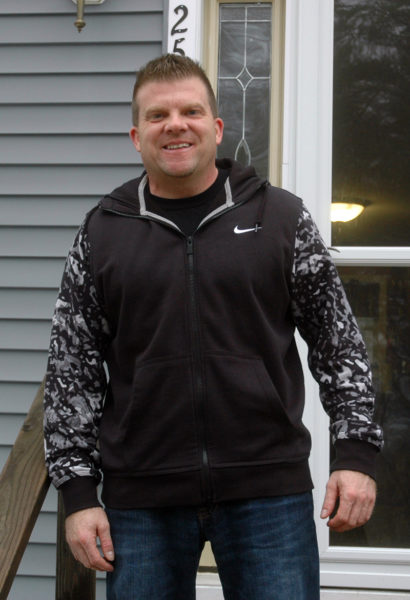 Randy Joubert, of Nobleboro, is working to pass a bill in the Maine State Legislature to expand adoptees’ access to their birth records. (Alexander Violo photo)

A Nobleboro man who discovered one of his co-workers at Dow Furniture in Waldoboro was his brother in 2009 is pushing a change to state law to help other adoptees access their birth records.

Randy Joubert has spent his spare time recently traveling to Augusta, delivering written and verbal testimony, to support L.D. 505, “An Act to Amend the Laws Governing the Issuance of Birth Certificates for Adopted Persons Born in Maine.”

“The goal is to stop the sealing and falsification of birth certificates of adopted children and head back to truth and transparency,” Joubert said.

Joubert is particularly invested in the issue as he discovered his full biological brother, Gary Nisbet, was riding in a Dow Furniture delivery truck with him in 2009, a discovery that led to a reunion with two half-sisters and a spate of national media coverage.

Joubert was able to find his brother in 2009 thanks to state legislation passed in 2007 that allows adopted adults to see their original birth certificates.

“At 35 years old, I was finally able to see my original birth certificate,” he said.

He now hopes to extend the same right to adoptees who are under age 18.

He said the idea behind the bill is to make information available to those who want to seek it out.

Benefits to halting this practice include allowing adopted children to know their family’s medical history, to research their genealogy, and to find other family members.

“To be denied that, the damage it does to an adopted child is significant. They’re being treated different than others. Why should we be denied our access when everyone else gets theirs?” Joubert said.

He said adoptions should be started on a positive note, not with the falsification of records.

“Secrecy and lies is not a good place to start. Adoptions should start with faith, openness, and love,” Joubert said.

According to the bill summary, the bill would amend the current laws governing adoption to eliminate the provision of state law that requires, upon adoption of a person born in Maine, unless the adoptive parents or adopted person who is at least 18 years of age requests otherwise, the original birth certificate of the adoptee be sealed and a new certificate showing the adoptive parents as the parents of birth be created.

The Judiciary Committee will hold a public hearing on the bill at 1 p.m., Thursday, March 16.

Joubert said the 13-member committee will decide whether the bill moves forward.

“Reunions are a whole other topic. It’s a private matter if both parties involved want to get together,” Joubert said.

He said on the whole he has received positive feedback and appreciates the opportunity to educate the public on a matter that doesn’t receive a lot of attention.

“I have my interest in this. It’s my chance to give back,” Joubert said.

Drawing from his own experience, Joubert said he views the legislation as a way to positively impact an adopted child’s life.

“For me, I always wanted to know my story. All those years, to wonder if you look like someone else, if you have a sibling out there, they could be anywhere. Your full-blooded biological brother could be sitting feet away from you,” he said.

A previous change to the state’s adoption laws helped Joubert find out his co-worker, Nisbet, was his long-lost brother.

After the Legislature passed a bill to give adult adoptees the right to obtain a copy of their original birth certificate, Joubert was able to see his original birth records and find out the identity of his birth parents, Wilfred and Joan Pomroy.

Further inquiries for information from the state revealed Joubert had a younger brother whose name was Gaylord. Nisbet’s name was changed when he was adopted.

Nisbet learned the identity of his birth parents after petitioning a court for his records, but was unaware he had a brother.

Joubert and Nisbet were taken into custody by the state at a very young age and raised in separate adoptive homes in Lincoln County.

After the initial reunion of the two brothers in Waldoboro, an older half-sister from Warren, Joanne Campbell, saw media coverage and came forward with a birth certificate proving their relation.

The trio flew to New York City, appeared on the “Today” show, and, as a result of the appearance, they were reunited with another half-sister, Kathleen Cooper, of Sarasota, Fla.

Joubert described the process of discovering his family members in 2009 as a whirlwind experience.

“We still keep in touch all the time,” Joubert said.

He said the whole sequence of events leading to the remarkable reunion and reunions started with local news coverage, leading Joanne Campbell to come forward, with the story going from newspapers to local news before the group made their appearance on the Today show, leading to the final reunion with Cooper in Manhattan.

“All the things that lead up to this were just crazy,” Joubert said.

Joubert said he understands not all reunions are desired, but he believes adoptees have the right to know about their backgrounds.

“At least you know. It doesn’t mean you’ll be friends or have amazing relationships, but at least you’ll know,” Joubert said.