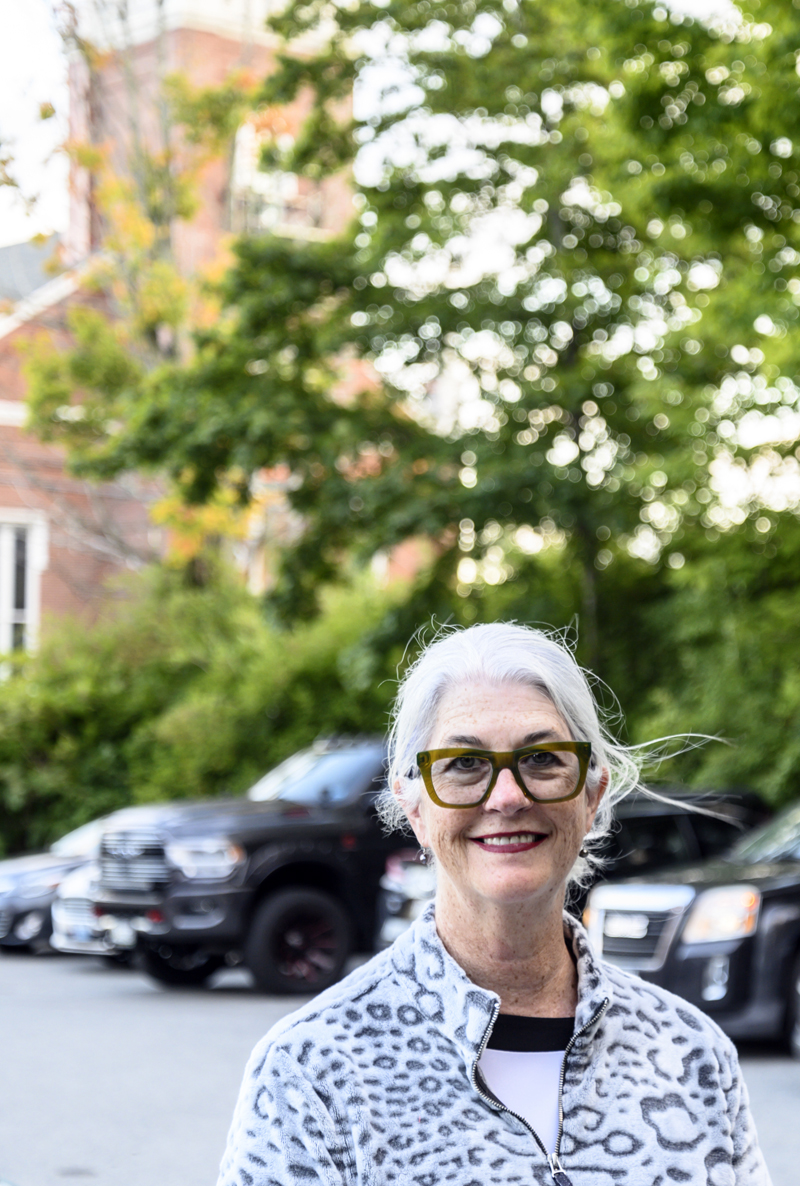 In March 2022, recently retired nurse Patty Alfieri received an unexpected call from a doctor she once worked with. He asked if she wanted to go to Ukraine.

Russia had invaded the country on Feb. 24, and a humanitarian crisis was unfolding rapidly. Ukrainians fleeing the front lines were being resettled in temporary communities with limited resources. Many had ongoing health care needs and were struggling to recover from the shock and trauma of losing their homes to the violence of war. Medical professionals were in short supply.

“I have the time, I have the skill. I have something that they need,” she said. “And it’s something I really like to do. I get a lot out of it.”

Alfieri knew her capabilities. It takes a certain kind of person, she said, to go into such uncertain situations and to pull together everything that’s needed.

She had prior experience in disaster relief situations. She had responded to the 2010 earthquake in Haiti where estimates of the dead ranged as high as 300,000 and hundreds of thousands more were displaced from their homes. She had provided aid to help with chronic need in Jamaica.

Alfieri joined forces with Sarah Wells, a physician’s assistant from North Carolina who had also responded to the Haitian earthquake, and with Lisa Orloff, founder of the New York City-based World Cares Center, an organization founded in the aftermath of 9/11 to help communities recover from disaster.

The three-woman team made plans to head to Ukraine in July, which gave them time to fundraise and prepare. Alfieri was in charge of the medical end, sourcing supplies to include over-the-counter medications for coughs, colds, and headaches; high blood pressure medication; insulin and needles for diabetics; eye drops; anti-infection measures; treatments for wound care.

Alfieri solicited donations herself in order to buy what was needed. Whatever costs are not covered through donations, whether for medicine or travel, are paid for by the volunteers.

“You don’t commit to a trip like that if you don’t know that you would be able to buy (your own) ticket,” she said.

Once on the ground, costs like hotels, transportation, and translators are covered by the aid organizations. Trips like these are expensive for the organization that sponsors them and logistically challenging, so the stays are not usually for extended lengths of time, Alfieri said. Her team flew in on July 7 and back out July 16.

For six of those days they were stationed in and around Lviv, which was still a functioning city. Restaurants were open, people were out walking around, and it was even possible to use the ride-sharing app Uber.

But the statues outside the opera house were hidden behind scaffolding and sand bags; its stained glass windows were boarded up. There were “hedgehogs,” welded metal devices that Alfieri said looked like giant toy jacks, in place at all the bridges. They were designed to stop Russian tanks from entering the city. Volunteers with World Central Kitchen, a nonprofit founded by Chef José Andrés, dished out food to the 2,000 people who sought aid at the city’s centrally located train station every day.

The clinic Alfieri worked out of was on the grounds of an event venue just outside the city, where people attended weddings prior to the Russian invasion. Now an array of repurposed shipping containers provides temporary housing.

“Displaced people were dumped into a neighborhood to live together,” Alfieri said. “They’re adjusting to this sort of settlement.”

Part of the job for aid workers was to help them make that adjustment, a big hurdle of which was building trust, Alfieri said. She was surprised by the reticence of the people, but knew that distrust was a symptom of their trauma.

Ukraine had key differences from her previous experiences, Alfieri said. Unlike Haiti, Ukraine is not a third world country. Many Ukrainians are educated, used to a high level of health care, and never conceived of the situation they found themselves in.

The Ukrainian people have been told so many times that Russia wouldn’t be coming, Alfieri said. They had been reassured the war wouldn’t happen. Now they see the missiles overhead, not knowing what city or town might be hit. Ukrainians are in a constant state of “wondering and hoping,” Alfieri said, no longer taking their safety for granted.

Alfieri said that she was often hugged, thanked for coming, and asked to carry a message: to tell people “don’t forget about us.”

Alfieri said she told her husband not to watch the news. She was not on the front lines, but she spent plenty of time in bomb shelters and texted him each time, but only after it was safe. She never let him know beforehand that air raid sirens were sounding.

The warnings come via an app, and parking structures, underground cellars, or old pubs that were built below street level served as shelters.

Alfieri said she wasn’t afraid though she admits she got “a little edgy” the first time when a turnstile entrance jammed, causing a frantic jostle to get past.

People bring extra sweaters into shelters due to the cold, Alfieri said. They bring snacks, water, and toys for the kids. Hearing the alarms and heading for shelter was an almost daily occurrence.

On her last day, she spent two hours in a bomb shelter. It was the same day missiles struck in the central southern area and killed a mother and child attempting to escape across a bridge, making international news.

A lot of people ignored the sirens, Alfieri said, but after those deaths, Ukrainian President Volodymyr Zelenskyy urged everyone to seek shelter when the warnings came.

Alfieri remembers treating a woman in her 60s from Mariupol, neatly groomed, nondescript, but very thin. She had cerebral palsy but was in decent condition, able to walk. She was being cared for by her daughter.

The two women had not wanted to come to the clinic. Alfieri thought the daughter might have been afraid that she would be judged for her mother’s condition, afraid they might be sent elsewhere, or worse, separated.

“She was so sad. She just wanted to go home,” Alfieri said of the mother. “But I knew there was no home for (her).”

The Mariupol she longed for no longer existed.

“That strikes you,” Alfieri said.

Alfieri still supports relief efforts from her home in Nobleboro. The avenues of communication with the World Cares Center are still open so she doesn’t rule out returning to Ukraine in the future.

Alfieri said people in the U.S. can help with their voice and their vote: they can contact their congressmen or senators. They can support efforts to help fund the fight. “They need those weapons,” she said.

For those who feel moved to do more, who want to provide direct in-person aid as she did, Alfieri advises they keep an open mind.

She recommends not going unless partnered with one of the Ukraine-based aid organizations that has a presence in the U.S.

“You’re always changed when you do these things,” Alfieri said. “But I think for the better. It makes you more sensitive to what people are going through. It makes you think about the fragility of systems and (it) brings a greater appreciation for family, friends, and safety.”