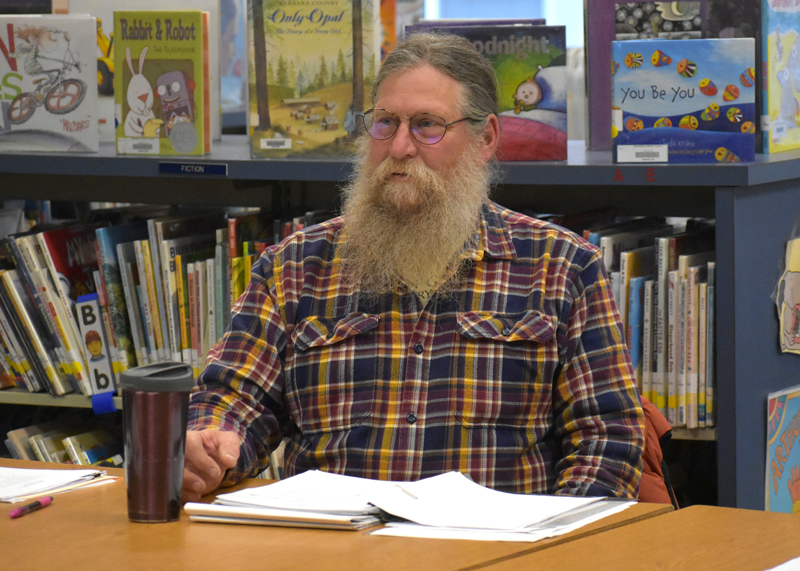 The Nobleboro Planning Board heard more details of a planned ecotourism destination on Sidelinger Road, as well as concerns from neighbors, during a public hearing at Nobleboro Central School on Thursday, April 19.

Kelsey Gibbs and Matt Silverman, under the name Out of Doors LLC, plan to bring a sustainable ecotourism destination, Wanderwood, and a working farm to their 96.5-acre property at 79 Sidelinger Road, on Pemaquid Pond.

Gibbs and Silverman’s site plan review application first went before the planning board Feb. 15, and a site visit was held April 7.

Plumb said the proposal takes a phased approach over a three-year timeline.

“They want to create Wanderwood as a lodging and events destination in combination with other outdoor events,” Plumb said.

Plumb then turned the floor over to Silverman, who gave background information on the project and discussed the concept and goals.

According to Silverman, who has experience working for the Kennebec Land Trust, he and Gibbs attended Colby College in Waterville and are excited for a chance to bring a sustainable business to Nobleboro.

“We are excited to turn our passion for the outdoors into our livelihood. We want to foster a culture of respect for the property and really be stewards,” Silverman said.

“We want to do ecotourism in an economically viable way to protect and appreciate the wilderness and bring people from near and far to see the natural beauty Nobleboro has to offer,” Gibbs said.

Gibbs said once the business is up and running, the plan is to host neighborhood appreciation and open farm days at the site.

Gibbs said she and Silverman would work to be a positive part of the Nobleboro community.

“We hope to earn your support by being a responsible business in town. We know the business and think this is the perfect fit for the agrarian character of our town,” Gibbs said.

Gibbs said she and Silverman are presenting the board with all three phases of the project to give them flexibility and security as business owners moving forward.

“We are excited about this opportunity and for the potential of our property,” Gibbs said.

Gibbs said the hope is to employ a farm manager and two part-time employees.

The idea behind a multiple-year approach to the project is to give the business time to grow in a sustainable way, she said.

Silverman would act as the construction supervisor throughout the development process, according to Gibbs.

Silverman said the first phase of the project would focus on improvements to the driveway and the creation of a looped access to the property, in addition to enabling emergency vehicles to access the property.

Silverman said there would be berms and landscaping used on the parking area to mitigate stormwater runoff, and unobtrusive lighting and signage to provide safe and welcome access to the property’s driveway.

Elements of the first phase also include the construction of a small dock for non-motorized boats in a cove and the use of a small swimming area on a point extending into the pond.

During the first phase, occupancy will be limited to a maximum of 12 guests, according to Silverman.

The second phase would focus on the building of seasonal cabins, rustic cabins, small tent sites, and the improvement of the property’s infrastructure.

Silverman said that combined, the property would have the capacity for 30 guests in cabins and 12 guests in tents at this juncture of development.

The third phase would focus on additional amenities and further interfacing with the farm, according to Silverman. These steps would include a greenhouse and a multiple-purpose building for retreats and workshops.

Silverman said that if the business can support it, the plan would be to add a 10-bed bunkhouse, bringing the site’s total capacity to 52.

“We get a lot of traffic in the summer. How are we going to deal with that?” said Jeffery Karas, of Nobleboro. 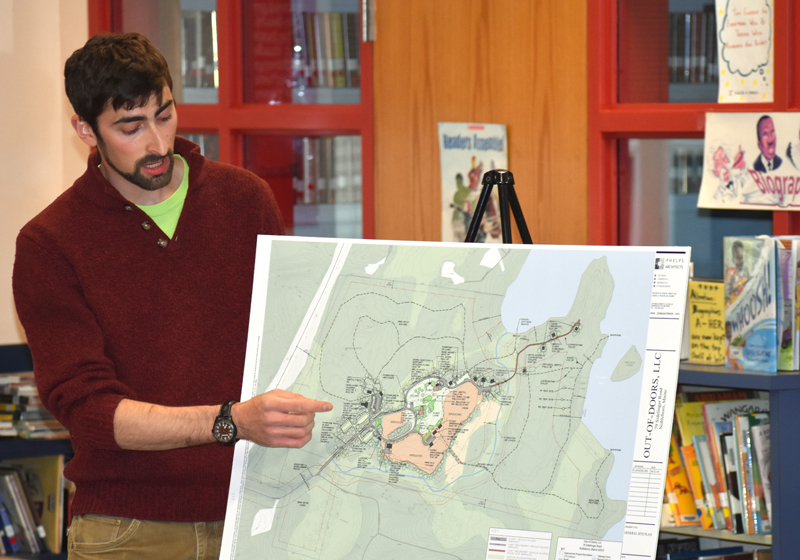 Kristine Lucas, of Nobleboro, raised concerns about the egress of Sidelinger Road onto Route 1.

“In its current state, it is a bottleneck and a safety concern now,” Lucas said.

Regarding the creation of direct access from the property to Route 1, Nobleboro Code Enforcement Officer Stan Waltz said Route 1 is a non-access highway and a new road cannot be added to the thoroughfare.

Jeffery Karas asked how expensive it would be for the town to widen Sidelinger Road.

Selectman Richard Powell said it would take a large amount of fill and gravel to widen the road.

“In my opinion, it would be very expensive. I’m not saying it is not possible, but there is a process to do. It would cost money and there are a lot of different things to think about,” Powell said.

Plumb gave the applicants an opportunity to address the questions and concerns.

Silverman said the goal is to minimize traffic from events by having parking on-site, supervising guest arrival, and having large groups carpool.

Jeremy Lucas, of Nobleboro, raised concerns about the plans for staggered departures and said he is concerned traffic from the site will spill over to nearby side roads, some of which are private.

Silverman said a temporary sawhorse could be put up during events, or a small sign to direct traffic to Route 1 and away from other side roads.

“A lot could improve with better signage for Sidelinger Road,” Silverman said.

In addition to concerns regarding traffic flow on Sidelinger Road, abutters and neighbors queried the applicants on noise strategies related to concerts and outdoor gatherings.

Patricia Karas, of Nobleboro, said she is concerned about music levels after 8 p.m.

“Noise carries across the lake. If we can hear Duck Puddle, I’m sure we can hear something come from right there,” Patricia Karas said.

Gibbs said testing would be done to ensure a low decibel level between the hours of 8-11 p.m., in accordance with the town’s ordinances and the business’s policies, and the business would look into sound-mitigating options at the barn.

“Noise is something we’ve been thinking about a lot and we’re looking at options for the barn,” Gibbs said.

Clete Baltes, a member of the planning board, asked the applicants what they thought would cause the loudest noise at their venue.

Gibbs said wedding bands would make the most noise.

Silverman said events at the barn could accommodate 100 guests and he and Gibbs worked with the Maine State Fire Marshal’s Office to ensure the safety of the venue.

Silverman said there would be no music after 11 p.m. and no fireworks would be allowed.

He said events on the property would take place during the season and could bring up to 200 people, including guests, onto the site.

Jeffery Karas pointed to finances as a potential area of concern regarding the project.

“From a financial standpoint, I would really like to see and need to understand the financial backing, so it’s not just left there,” Jeffery Karas said.

Sharon Abair, who was acting as the board’s secretary, said financial backing is part of the planning board’s approval process.

Waltz said applicants have to provide a letter from a bank or financial institution to the planning board.

Sean McVity, of Nobleboro, spoke on the project’s impact on the quiet nature of the waterfront area.

“I am concerned with a large influx of people coming to Sidelinger Road, frustrating the entire reason we moved here,” McVity said.

The majority of concerns raised by abutters and neighbors would be addressed by how the business is run in the future in lieu of site plan proposals, according to Silverman.

“I think we accounted for a lot of feedback, but I think most of the concern will be addressed by how we operate and less by the physical construction,” Silverman said.

Stephanie Gallagher, a Nobleboro resident and executive director of the Damariscotta Region Chamber of Commerce, spoke in favor of Gibbs’ and Silverman’s plans.

“I think this is a good idea for our town and the region as a whole. Our surrounding towns have events and we are sending people to Boothbay to stay. We could be capturing that economy locally. I think the concept is great and green,” Gallagher said.

Mary Sheldon, of Nobleboro, also spoke in support of the project.

“I think this is a great concept and the way Nobleboro would like to grow as far as ecotourism and a green business,” Sheldon said.

Sheldon said she appreciates the site’s potential to host large gatherings, noting the Grange hall on Back Meadow Road formerly filled this role.

Torie DeLisle, a Nobleboro resident and Gibbs’ colleague at Skidompha, said she was impressed with the entrepreneurial approach to the project.

“I’m continually impressed with their attention to detail and problem-solving attitude. I think they will follow through with what they will do,” DeLisle said.

A special planning board work session on the project has been scheduled for Thursday, May 10 at 6:30 p.m. in the town office.

The next regularly scheduled planning board meeting will take place Thursday, May 17 at 6:30 p.m. in the town office.