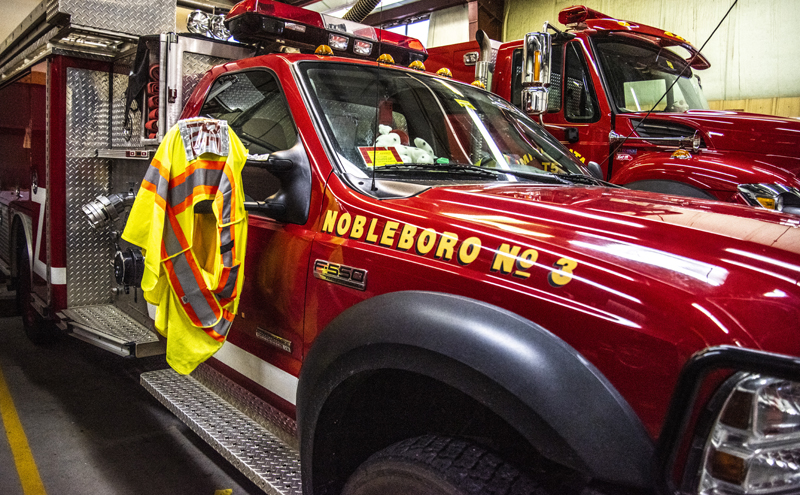 A $20,000 grant from the Stephen & Tabitha King Foundation will help the Nobleboro Fire Department buy hydraulic rescue tools known by the trademark Jaws of Life.

The King Foundation “has a special interest in organizations and people who have less recourse to usual channels of resources, focusing on community-based initiatives” in Maine, according to its website.

“I have the check right here,” Nobleboro Fire Chief Richard Genthner told the board of selectmen on Dec. 2. The department needs another $10,338 to complete the purchase.

Genthner said that after raising more than $3,000 with a September barbecue, the Nobleboro  Fireman’s Association is prepared to kick in $5,000. He asked if the board of selectmen would provide the additional $5,338 to make the purchase.

Dick Spear, chair of the board of selectmen, encouraged Genthner to use money in a fire truck repair fund. “If we can squeeze it out of the budget, we will,” he said. “If not, we’ll figure something out.”

“The question is, can we purchase in the next two weeks?” Selectman Jon Chadwick said.

Spear agreed it would be best to complete the purchase before the end of the year.

Genthner said the fire department’s budget has $20,000 to get through December. He reported that the department has fielded 310 calls so far this year, compared to 234 last year, and issued 2,000 burn permits, compared to 450 last year.

“People are home,” Spear said of the quadrupling of burn permits.

Genthner said the department’s air packs will expire in two years and it will cost $110,000 to replace them at a cost of $7,919.94 per pack, which includes two cylinders and masks. The department is going to seek a grant for the equipment. 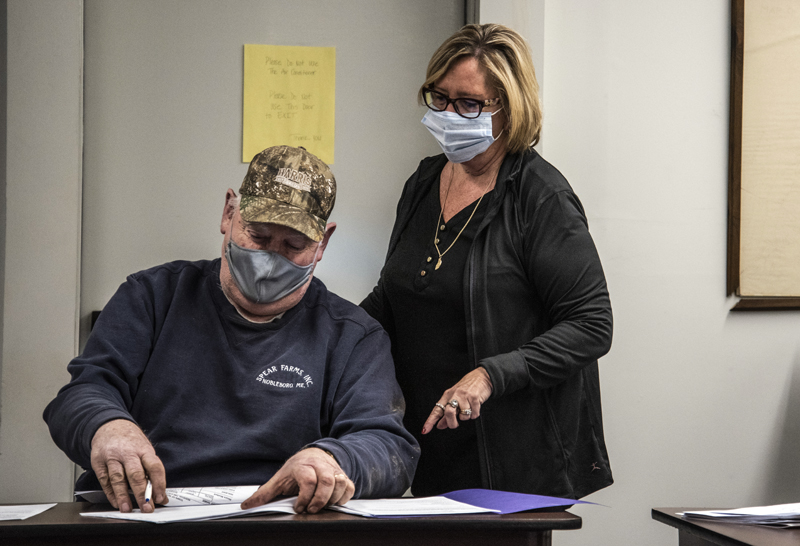 Nobleboro Town Clerk Sue Pinnetti-Isabel answers a question from Dick Spear, chair of the board of selectmen, during a meeting in Nobleboro on Wednesday, Dec. 2. (Bisi Cameron Yee photo)

“If the grant does not work, we have a little time,” Chadwick said.

Genthner also said the department will have to return its bright yellow fire truck at the end of the year. The department is renting the truck from Sutphen, a dealer in New Hampshire, to fill a gap in its fleet.

The department applied for a $486,000 grant last year to fund the purchase a new truck, but was denied based on call volume and the age of its fleet.

In other business, Town Clerk Susan Pinnetti-Isabel broached the question of conducting business by appointment instead of just limiting the number of people in the town office.

“All the surrounding towns are going to it,” she said.

“I don’t see a lot of difference between one or two people at time and appointment only,” Chadwick said.

Pinnetti-Isabel pointed out weather concerns with residents waiting outside.

The selectmen decided to revisit the issue. “Let it ride a little longer — it’s easy to switch to appointments if we need to,” Spear said. He said the office has “good flow” to support physical distancing.

The selectmen discussed a letter expressing a need for a restroom at the swimming hole in Damariscotta Mills. “It’s nothing we need to approach right now,” Spear said.

The park had a port-a-potty from Memorial Day to Labor Day in recent years at a cost of about $150 per month, but the town had it removed due to vandalism. “It’s a fine line whether we should have one or not,” Spear said.

The board agreed to consult the budget committee.

The town has not decided whether to have an in-person annual town meeting. The Nobleboro School Committee, at its next meeting, will address whether Nobleboro Central School could host the town meeting.

The selectmen recommended a budget meeting date of the first Monday in January. “This is going to come quick,” Pinnetti-Isabel said.