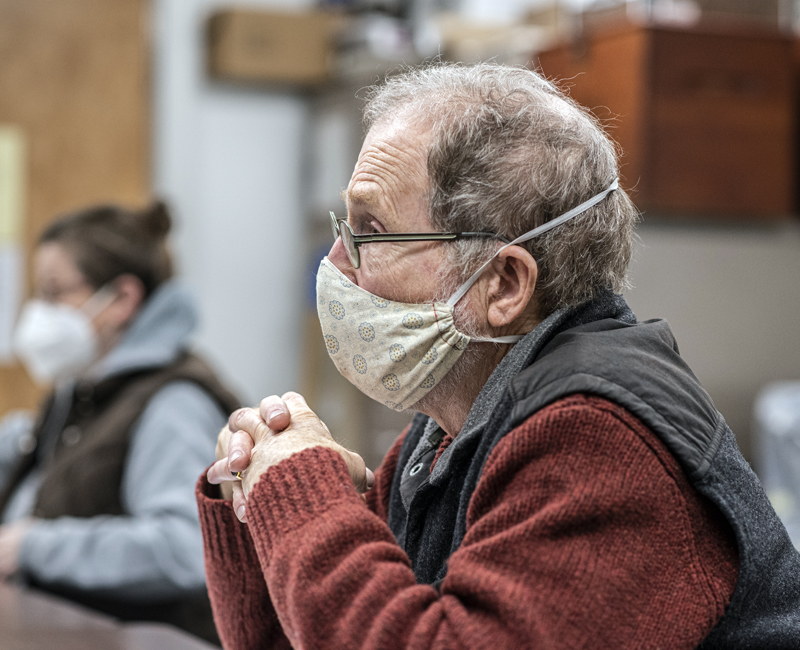 Nobleboro resident George Mason waits to address the board of selectmen Wednesday, Jan. 13. Mason attended the meeting to discuss the lack of restroom facilities at the swimming hole in Damariscotta Mills. (Bisi Cameron Yee photo)

Nobleboro residents George Mason and LeeAnna Libby attended the Jan. 13 selectmen’s meeting to express concern about the lack of restrooms at the Damariscotta Mills swimming hole and propose a plan to address it.

Mason said he has lived in Damariscotta Mills for “40-some-odd years” and the swimming hole at Ice House Park “means a lot to a lot of people generationally.” Mason said the neighborhood is seeing the water quality decline earlier in the season than in prior years.

“The park was always popular,” he said. “But people are coming from far and wide. I think we’ve reached a new level of density of people and impact on the lake. It’s not responsible at this point to just ignore it.”

Libby, who is the wastewater manager for the Great Salt Bay Sanitary District, sent a letter to the board of selectmen Jan. 7 in which she said that she had been contacted by residents concerned about the issue and interested in “the possibility of connecting a bathroom to public sewer.”

Over the years, the sanitary district has tested the water at the swimming hole, Libby said in the letter, “and at one point the area was closed to swimming.”

“I grew up spending many a summer day swimming at the Mills,” Libby said in the letter. “I have fond memories of the rope swing and playing rag tag with my friends. I also know what it’s like to need to go to the bathroom. Fifty years ago I needed a toilet. That need hasn’t changed for today’s kids. It is our responsibility as town representatives to protect our citizens and the environment for our future generations to enjoy.”

Dick Spear, chair of the Nobleboro Board of Selectmen, said that in the past, the town removed a port-a-potty from the site due to vandalism. He said that if there was a way to secure it, a port-a-potty could still be a good idea.

Libby said that “the people in the neighborhood don’t want to look at a port-a-potty.” In her letter, she said she had asked the environmental engineering firm Wright-Pierce to provide drawings of “a simple bathroom design that might work for the area.” Libby said that the drawings include a map of the district’s sewer facilities “with a possible connection dotted in at the top of the page.”

Selectman Richard Powell Jr. said, “We need to look at all options, not this single one.” 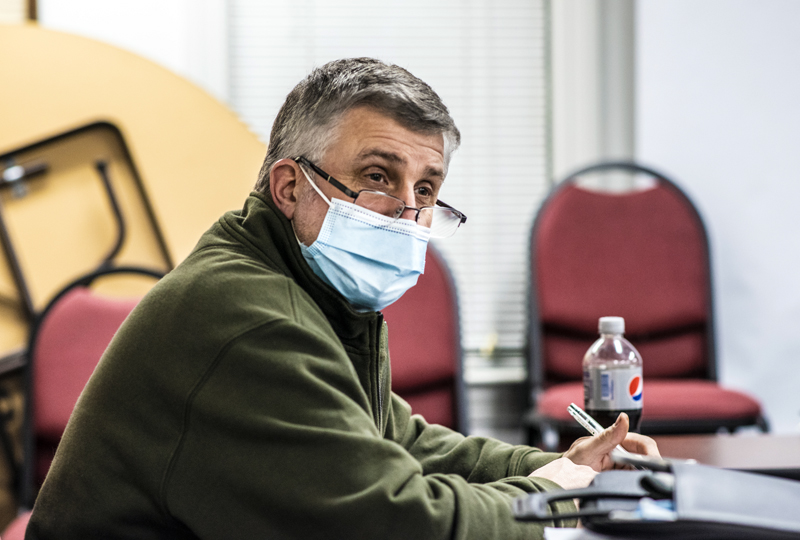 Libby suggested splitting the cost with Newcastle, as the swimming hole crosses over the town line. “I’d be willing to donate,” Libby said. “If we made it a community thing, that might help.”

Powell suggested looking for funds in the town’s recreation budget.

Spear said that any building would be “on town property, so the town has to have final say.” He said the town could “handle a port-a-potty this year,” adding that it needs to be handicapped-accessible and the location will need grading.

Spear said there will need to be a five-person committee to explore options. Libby, Mason, and Waltz all expressed willingness to serve. Spear said the committee should include an abutter to the park, so that point of view is represented.

Mason said that some people in the Mills are afraid that having a bathroom at the park will bring too many people into the area, but that “there’s been a neighborliness” that keeps dissent from becoming contentious. “The trump card is that the lake is in peril,” Mason said.

Spear said, “We’re willing to listen. If you get people and prices, we’ll work on it. We have five months to figure it out.”

In other business, Town Clerk Susan Pinnetti-Isabel brought up a new Trio interface for the town office’s computer system. The Moses interface would allow the office staff to speed up processing of certain licenses involving the Maine Department of Inland Fisheries and Wildlife. Pinnetti-Isabel said the initial cost to set up the interface is $925, followed by a fee of $178 yearly.

“It’s a lot quicker at the counter,” she said. “With this interface, it’s just a click of a button and (there is) no margin of error from entering individual figures by hand.”

She told the board that the price would soon go up, but the quote was valid until the end of January. The selectmen approved the expense.

Nobleboro will hold its annual town meeting by referendum, or secret ballot, this year, with polls open at the town office from noon to 6 p.m. April 27. There will be a public hearing at least 10 days prior.