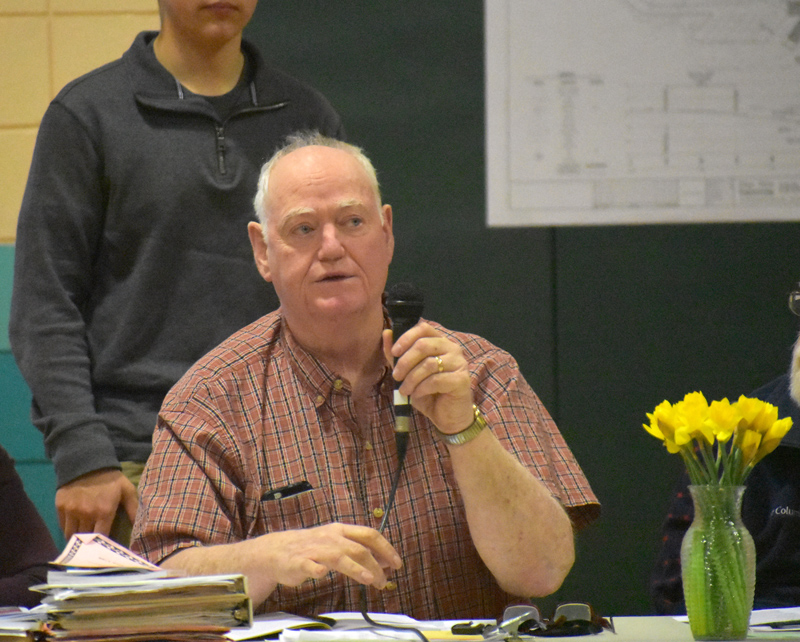 Nobleboro voters negotiated compromises on funding for Skidompha Library and the authority of the Nobleboro School Committee to transfer funds between budget categories during town meeting Saturday, March 16.

Nearly 100 people packed into the gymnasium of Nobleboro Central School to pass all 48 articles on the warrant, including the two with amendments.

The first of those two items was Article 35, to authorize the increase in transfer authority for the school committee.

The article included an explanation that, in the event of unexpected and unbudgeted expenses, the school committee has statutory authority to transfer up to 5 percent from one cost center to another in order to cover the overage.

The committee proposed to raise this amount to 15 percent.

Stan Waltz made a motion to set the amount at 10 percent and cap any transfers at $50,000.

“If it’s more than that, they have to come back to the town for a special town meeting,” Waltz said. 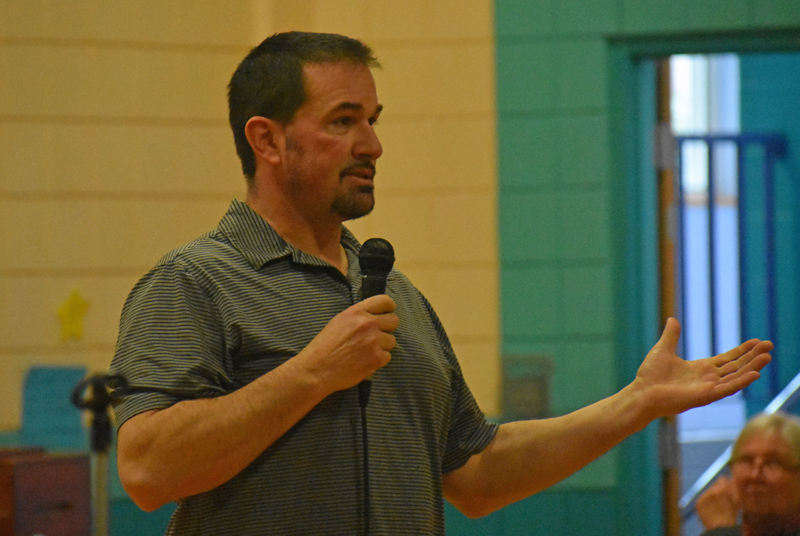 Josh Hatch, a member of the school committee, said he was not opposed to Waltz’s amendment, but would like to see the percentage increased from the existing 5 percent cap.

“Every year I’ve been on the board, we’ve had to transfer money. Because of the 5 percent, we have to transfer from different lines instead of one. We don’t have to have 15 percent, but I would like it to be more than 5 percent,” Hatch said.

According to Hatch, any transfers need approval from the school committee.

“For any larger transfer, we would be in touch with the selectmen. We’re not asking for more dollars. This is money that has already been approved,” Hatch said.

In response to a question on the need for such transfers, Hatch said a transfer could be needed if an additional educational technician had to be hired over the course of a school year.

Nobleboro Central School Principal Martin Mackey said a transfer could also be used to cover the cost of a long-term substitute teacher. 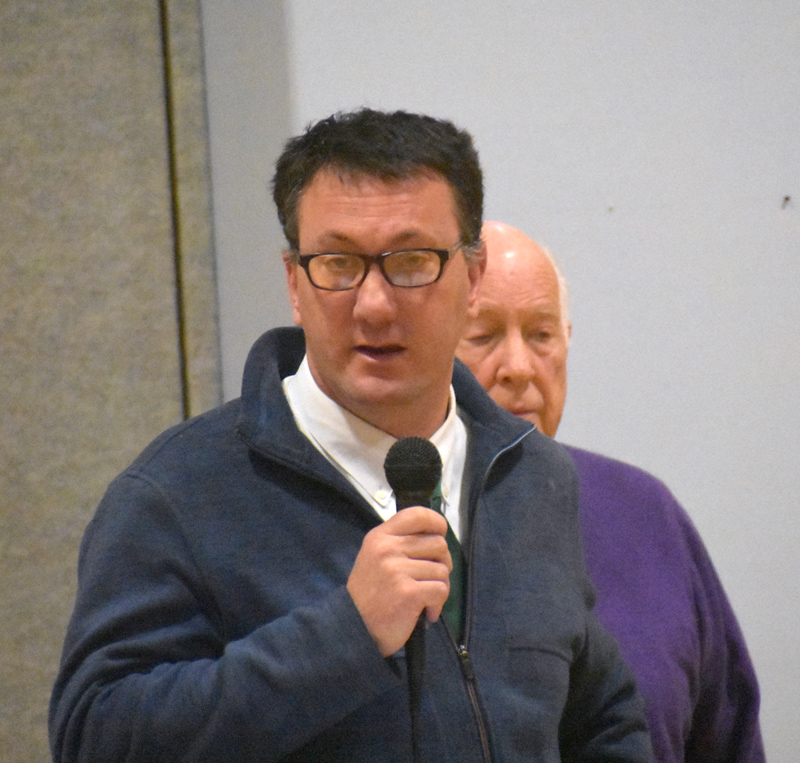 “It’s important we have a system of checks and balances, where townspeople have authority to approve expenses,” Powell said.

The amended article passed by a vote of 75-7.

The second article to be amended dealt with the town’s support of Skidompha Library in Damariscotta.

Jim Birkett was the first resident to speak on the request.

“This library is a free library for Damariscotta, Newcastle, and Nobleboro. It serves little kids and teenagers, allows you to check out books, audio books, DVDs, and provides a bunch of services to the town,” Birkett said.

The town’s funding to the library has been flat since 2012 and, according to Birkett, Nobleboro has fallen behind Damariscotta and Newcastle in terms of funding the library.

“Other towns are wondering why they have to pay retail and Nobleboro gets it wholesale,” Birkett said. 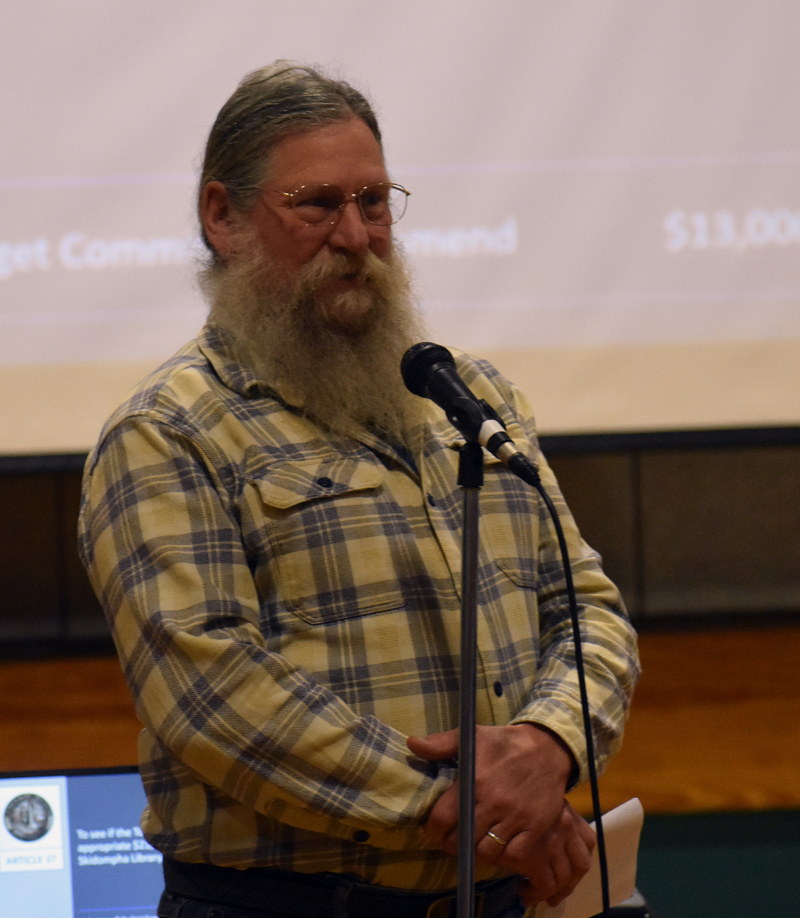 Birkett said $13,000 was a good compromise and the 30 percent increase this year would be a good show of support from the town for the library.

“It’s fair to say they will be coming back in future years with requests for additional funding and they have to persuade you one or two years from now because the selectmen can’t commit funds in advance,” Birkett said.

Betty Welt spoke in support of the $13,000 appropriation this year.

“I do believe no one wants to pay the full jump in one year,” Welt said.

After a question regarding the need for the increase, Welt said that in past years, the library has received large gifts from certain donors to make up for shortfalls, but a few of those donors have died.

Brown spoke against increasing that amount, but recommended that voters support the $13,000 appropriation.

“Skidompha is not Nobleboro’s library. We can go to Waldoboro’s library for free. The budget committee asked for a printout of where the money was going and we were told we couldn’t see it. If I’m going to take money out of my pocket, I’d like to know where it is going to go,” Brown said.

According to the Waldoboro Public Library’s website, however, nonresidents must pay a $25 annual fee unless they pay taxes to the town of Waldoboro or work for a Waldoboro employer. Nobleboro residents receive free memberships at Skidompha.

Alice Scott made a motion to amend the article, raising the total appropriation to $15,000.

“We really need the other $2,000. It would really be a big help this year,” Scott said. Scott’s amendment passed in a hand tally.

A second attempt to amend the original article to the full initial request of $21,489 resulted in a 38-38 vote, confirmed in a recount, and failed. 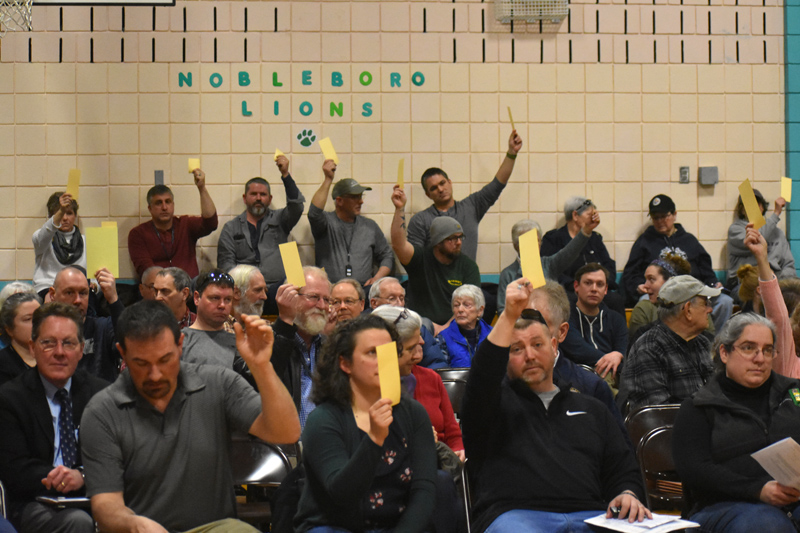 Nobleboro residents vote on an article during town meeting in the Nobleboro Central School gym the morning of Saturday, March 16. (Alexander Violo photo)

The town meeting kicked off with Town Clerk Sue Pinnetti-Isabel reading off the election results.

Pinnetti-Isabel thanked Lewis and York for their service to the town.

“Bud has spent the last six years as a selectman and six years before that too. He was also on the planning board and I would like to recognize him for what he has done over the years to help us out here,” Dick Spear said.

“For 18 years, John York has been road commissioner and he has done a superior job on the roads. The town roads are as good in the area as any around here. I want to thank John for all the work he has put in over the last 18 years on town roads,” Dick Spear said.

Dick Spear also thanked residents for their attendance and recognized the town’s volunteers.

“This is the largest crowd we’ve had in the last few years. I want to thank everyone for coming out,” he said.

“I want to thank all the committees,” he said. “These people all work voluntarily. I want to thank the budget committee, who met in January and did their due diligence to come up with something reasonable for the town of Nobleboro.” 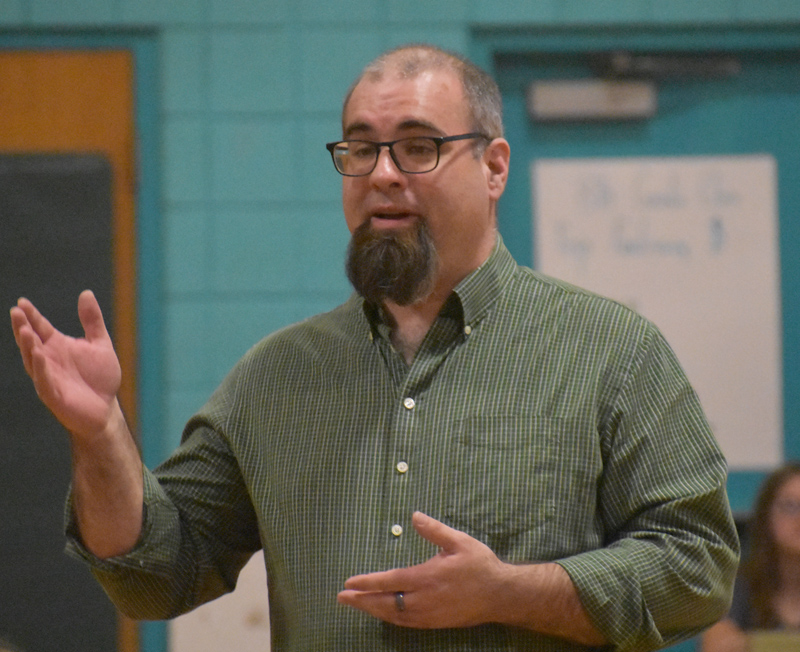 Newcastle Selectman Ben Frey explains the use of electronic keypads to voters at the Nobleboro town meeting Saturday, March 16. Nobleboro used the devices for the first time. (Alexander Violo photo)

The town meeting was the first in which Nobleboro residents used electronic keypads to vote.

Newcastle Selectman Ben Frey gave a short demonstration on the keypads at the outset of the meeting.

Dick Spear encouraged residents to give the selectmen and town office feedback on the system after town meeting.

He said that for this year’s meeting, the town borrowed keypads from Newcastle, but if they are to be used in future meetings, the town would need to purchase a new keypad system at a cost of roughly $3,000.

Residents were able to use the keypads for all articles expect for Article 31, a vote to see what sum the town would raise and appropriate in additional local funds, $916,529.31, for the education budget.

This article necessitated a written ballot and passed by a margin of 84-7.

The first question from the public was about why the request for paving, $130,000, was up from last year.

The next question was about the request for $89,990 to operate The Minnehata Fire Company.

The increase from last year’s budget, $68,458, was attributed to the need to purchase around $20,000 worth of turnout gear for firefighters, according to Dick Spear.

Dick Spear’s remarks were followed by a question from the public about increasing the fire department’s budget to keep insurance premiums down.

Nobleboro Fire Chief Ryan Gallagher responded. “I’d love to have more, love to have a full-time fire department, but I don’t think our small town could afford that,” Gallagher said.

(Correction: An earlier version of this article online and on the front page of the March 21 print edition incorrectly identified a member of the Nobleboro Budget Committee who spoke about Skidompha Library. The committee member was Buddy Brown, not Robert Spear. The Lincoln County News regrets the error.)