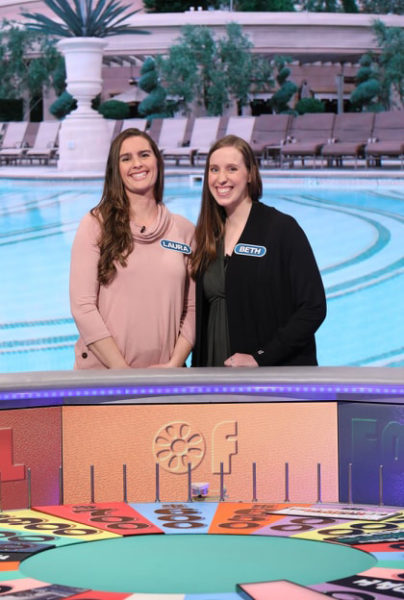 From left: Laura Oliver, of Nobleboro, and best friend Beth Day, of Pittsfield, on the set of the long-running game show “Wheel of Fortune.” (Photo courtesy Laura Oliver)

A Nobleboro woman and her best friend flew to Los Angeles in January to compete on “Wheel of Fortune” during the long-running game show’s “Girlfriend Getaways” week. The episode will air on Channel 8, WMTW, at 7 p.m., Wednesday, Feb. 19.

Laura Oliver, of Nobleboro, and her best friend, Beth Day, of Pittsfield, met in fifth grade and attended Medomak Valley High School together.

“We met playing pee wee basketball in Waldoboro and have been friends ever since,” Oliver said.

“I walked into a gym and a girl asked if I wanted to pass the ball around and that girl ended up being Laura,” Day said. In addition to basketball, they played soccer and softball together.

Oliver and Day could not reveal the results of the show, but are excited to watch the episode with family and friends.

Oliver started watching “America’s Game” with her grandparents and her family watches it now. She was thrilled to meet hosts Pat Sajak and Vanna White.

“My kids love it. There are not a lot of shows on right now the whole family likes, but ‘Wheel of Fortune’ is one we like watching together,” Oliver said.

Day has watched the show since childhood too. “I remember growing up, you had supper and after, ‘Wheel of Fortune’ and ‘Jeopardy!’ came on,” she said.

Oliver described their experience as a once-in-a-lifetime opportunity.

“It was really fun, such a great time. Everybody on set was so awesome when we were there,” Oliver said.

Oliver credited the team at “Wheel of Fortune” with calming contestants’ nerves and creating a positive environment that made the trip one she and Day will never forget.

“Meeting Pat and Vanna was great. They were both so nice and the producer put you at ease too,” Oliver said.

Oliver said being with her best friend made the experience more manageable.

“She was awesome. She helped me feel more relaxed and it was nice to have a friend next to me. Before the show we practiced a lot, taking turns spinning and calling out letters,” Oliver said.

“It was so much more fun to be able to go out there with a friend,” Day said.

The friends were in Southern California from Jan. 8-11, with filming of the show taking place Jan. 10. They visited Santa Monica Pier and other tourist sites, including the Hollywood sign.

Oliver said it was 68 degrees and sunny during their time in Los Angeles, a nice respite from January in Maine, although some locals were bundled up and the “Wheel of Fortune” staff apologized for the “cooler” weather.

She and Day landed the spot on “Wheel of Fortune” after Day sent in an audition video taken at West Quoddy Head Lighthouse in Lubec.

Oliver said there had been a mobile audition when The Wheelmobile visited the Bangor area, but since Day couldn’t attend, she sent in her video instead and was told she could bring a friend to a subsequent audition.

The friends traveled to Bar Harbor in September 2019 for an audition, where they were told they had been selected and should stand by to pack their bags for a trip to Los Angeles.

“We took part in mock rounds and after were told we could be contacted in a week or up to a couple years,” Oliver said.

Oliver said a challenge of being on the show was how different the environment was on set to watching the show at home.

“It was a challenge, focusing on everything we had to do. When you are at home on the couch, it’s easy to play the game,” she said.

Day agreed. “On the TV show, there are a lot more things to worry about than when you are on your couch at home,” she said. 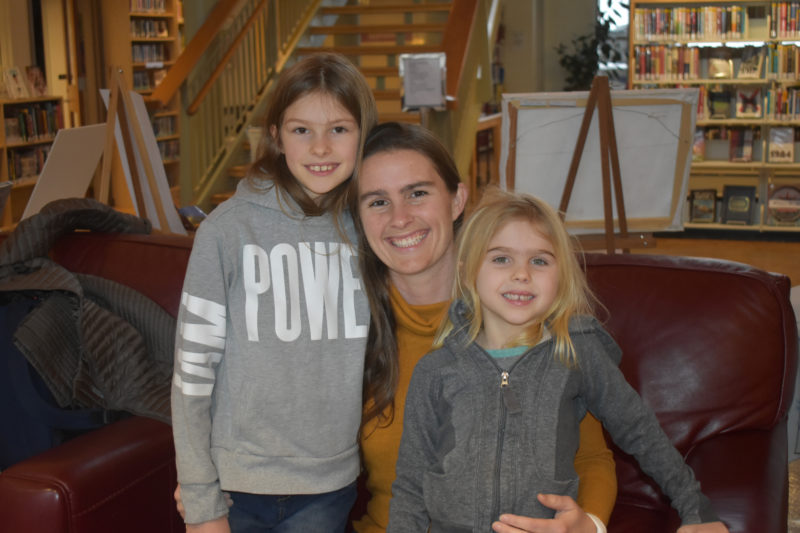 Oliver is originally from Friendship. Today, she lives in Nobleboro with her husband, Jacob, and their two children, Adelaide, 9, and Eve, 5.

She homeschools the children. When they are not in class, they enjoy reading and spending time outside, at the beach or kayaking, during the summer.

Oliver said one of the hardest parts of the “Wheel of Fortune” experience was keeping quiet about their appearance until the show released press photos from the upcoming episode.

“We had to keep everything hush-hush for a while,” she said.

Day, originally from Waldoboro, said she was happy to be able to share the experience with Oliver.

“Wheel of Fortune” started airing in 1975. Contestants uncover hidden phrases by guessing one letter at a time, winning money or prizes as determined by a spin of the wheel.