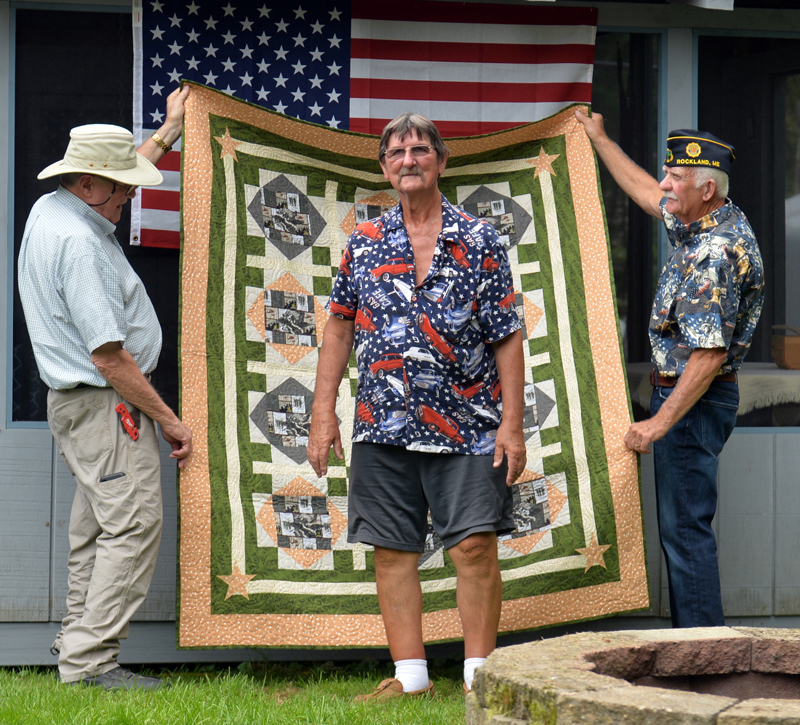 Vietnam veteran Stanley Winchenbach, of Waldoboro, stands in front of quilt presented to him in a Quilts of Appreciation ceremony in Nobleboro. (Paula Roberts photo)

Pat Johnston has a huge heart when it comes to helping veterans. Dressed in a red, white, and blue scarf with a flag lapel pin, she looked every part the patriot, during a Quilts of Appreciation ceremony at her Nobleboro home on Sunday, Sept. 11.

Johnston is a former member of Lincoln County Quilters, who sponsored the Quilts of Gratitude program for many years. That organization disbanded earlier this year, and Johnston decided to take up the torch and keep the quilt project alive, renaming it Quilts of Appreciation. On Sunday, she gave away 13 quilts to area veterans.

“It makes my heart happy. It is the only way I can give back to veterans,” Johnston said. Her husband, Wayne, is a Vietnam veteran.

The quilts were made by Johnston, Syd Faulkingham, Deb Morrison, Carol Robbins, and Donna McDonald. They were longarm quilted by Michelle Maxham, one of the owners of Freeport-based Cotton Weeds Quilt Shop.

“I love it,” Maxham said of the Quilts of Appreciation program. “It is absolutely wonderful. There are not a lot of ways to give back to veterans. It is just a small thing we can do to help.”

Over 50 veterans, friends and community members attended the ceremony. The program opened with singing “God Bless the USA,” a fitting song for the occasion held on the anniversary of 9/11. The song was led by Johnston and Samantha York, co-anchor of the “207” TV program.

Years ago Johnston told a veteran she wanted to give him a quilt, but he refused. Johnston asked him if he knew where he was going, then asked if he knew if he was coming home. He answered no.

“I said, this is why I want to give you a quilt,” Johnston recalled.

A couple of days later, the veteran called and said he would accept a quilt. He told Johnston that receiving a quilt changed his life. After receiving it, he went to the Legion Hall for the first time, and realized he was with his “brothers” and not part of the “audience,” she said.

Johnston told him that he “made all those stitches worthwhile.”

Johnston, with the help of Vietnam veterans Ron Edwards, of Damariscotta, and her husband Wayne Johnston, of Nobleboro, presented the quilts to veterans.

The first quilt was presented to Maj. Sharon Heine, of Rockland. Heine served stateside in the Air Force during the Vietnam era in Texas, Panama Canal Zone, and in Arizona.

Air Force veteran Ray Thompkins, of Thomaston, served in the Gulf War and Desert Storm in 1991. He was a security specialist.

Michelle Sawyer, of Rockland, was not able to attend the ceremony, but her quilt was received by American Legion Post No. 1 Commander Russ Wolfertz. She served in the Coast Guard for 21 years, and received the rank of chief.

Stephanie Grant, of Farmingdale, was in Army operations during Iraq Freedom and Kuwait from 2003-’05, and in the U.S. Army Reserves/Maine National Guard from 2000-’10. She received the rank of sergeant.

Jim Grant, husband of Stephanie, received an unexpected quilt. He served in the Marine Corps in Desert Storm and Desert Shield from 1986-’91.

Bridget Miller, of Newcastle, served stateside in the Air Force and achieved the rank of captain.

Richard B. McGuiness, of Winthrop, served in the Marines in Vietnam from 1961-’66. He was an embassy security guard and achieved the rank of sergeant.

First Lt. Col. John J. Ryan, of Boothbay, served in the Air Force in Vietnam in 1970 and received the Distinguished Flying Cross medal.

Stanley Winchenbach, of Waldoboro, served in the Army in Vietnam from 1971-’72. He worked in ammo supply for helicopters.

Alan MacMunn, of Washington, was unable to attend the ceremony. His quilt will be presented at a later date. MacMunn served in the Air Force in Vietnam from 1972-’76 as a radar technician.

Lt. Col. Dr. Christine Zimmerman, of Jefferson, served in the Air Force as a flight surgeon. She currently works at TOGUS and is active in the National Guard.

Pat Johnston said she gets names of veterans by word of mouth and from her husband, who wears his Vietnam veteran hat everywhere. When veterans stop to talk to him, Wayne Johnston will ask if they have ever received a quilt. If they say no, they will take down the veteran’s name and phone number.

Pat Johnston said she received lots of comments about holding the ceremony in her backyard in Nobleboro, because it was “homey, relaxed, and not regimented.”

“I felt good when the day was over, tired but good. I love the veterans,” Pat Johnston said.

Her next project is making a few quilts for the Boothbay Veterans Emergency Temporary Shelters, or Boothbay V.E.T.S.

“There will be a next time,” Pat Johnston said of holding another Quilts of Appreciation event. “It is the only thing I can do to make me feel good about supporting the veterans.”

Although she had lots of wonderful comments about the ceremony, the one that tugged at her heart strings came from her son, David Dailey, who said, “Mom, I am so proud of you, you were awesome today.”

“It has been a privilege to have veterans here and do this for them. It is the only way I can support the veterans,” Pat Johnston said.