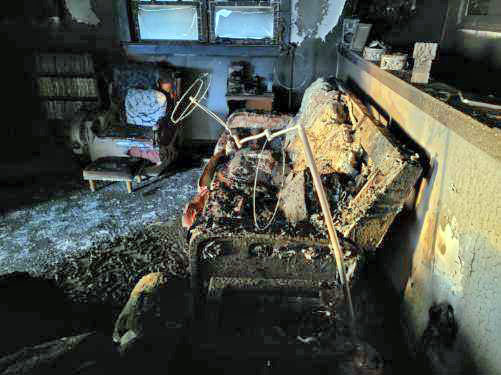 A floor lamp ignited two couches in the living room of an empty seasonal home in Bristol the afternoon of Saturday, Jan. 7, causing a structure fire. Bristol First Assistant Fire Chief Jared Pendleton said the fire likely began with a surge of 220 volts of electricity through a 110-volt outlet after damage to power lines from recent storms. (Photo courtesy Jared Pendleton)

An electrical fire in an empty structure at 253 Pemaquid Trail in Bristol the afternoon of Saturday, Jan. 7 caused interior heat damage but no injuries or structural damage.

Bristol First Assistant Fire Chief Jared Pendleton, who was first to respond to the fire, said the electrical surge believed to cause the fire at the waterfront home was likely related to pole damage from recent storms.

The Maine State Fire Marshal’s Office confirmed on Tuesday, Jan. 10 that the fire was accidental and electrical in nature, according to Maine Department of Public Safety Spokesperson Shannon Moss.

The house is owned by Robert Fairbrother of Augusta, according to Pendleton, who said it is used as a seasonal and weekend home. 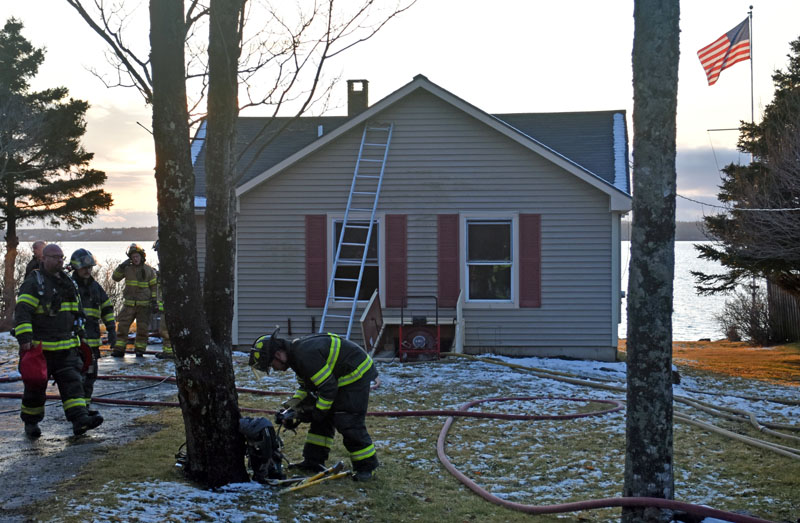 Firefighters prepare to clear the scene of a Bristol structure fire on the afternoon of Saturday, Jan. 7. The interior of the home’s first floor was damaged by high temperatures. (Elizabeth Walztoni photo)

The structure was empty that afternoon when a Spectrum worker repairing an unrelated issue saw smoke, heard crackling, and called 911. Fire departments were paged at 3:06 p.m.

Pendleton said he believed the fire started when an electrical surge put 220 volts of electricity through outlets in the house that were made to handle only 110. A floor lamp in the living room then likely caught two couches on fire, Pendleton said, and the fire spread.

The fire was in its free-burning stage but ran out of fuel from the sealed windows, doors, and sheetrock that created an envelope of several hundred degree heat.

“The first floor is melted,” Pendleton said. “It’s going to be rebuilt, no question.”

He said the fire had created a buildup of heat when responders arrived. Firefighters dropped the internal temperature inside with a hose through the kitchen door, then removed a window and used high-velocity fans to stabilize the pressure. 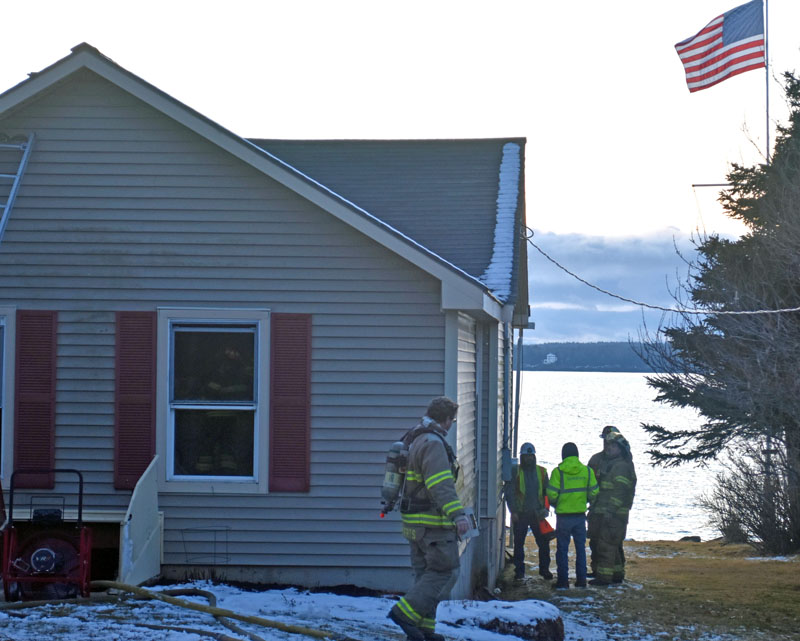 Firefighters and Spectrum employees discuss an electrical box on the side of a home in Bristol that caught fire the afternoon of Saturday, Jan. 7 after an electrical surge. (Elizabeth Walztoni photo)

Central Maine Power Co. cut power while the fire was fought and was on scene repairing power lines. Spectrum was also on scene.

Next-door neighbor Stan Wate said he and his wife Sally were told by Spectrum to leave their house until the power was shut off. He said he saw black, then white smoke coming from his neighbor’s home.

All units cleared the scene at 5:14 p.m. Saturday.