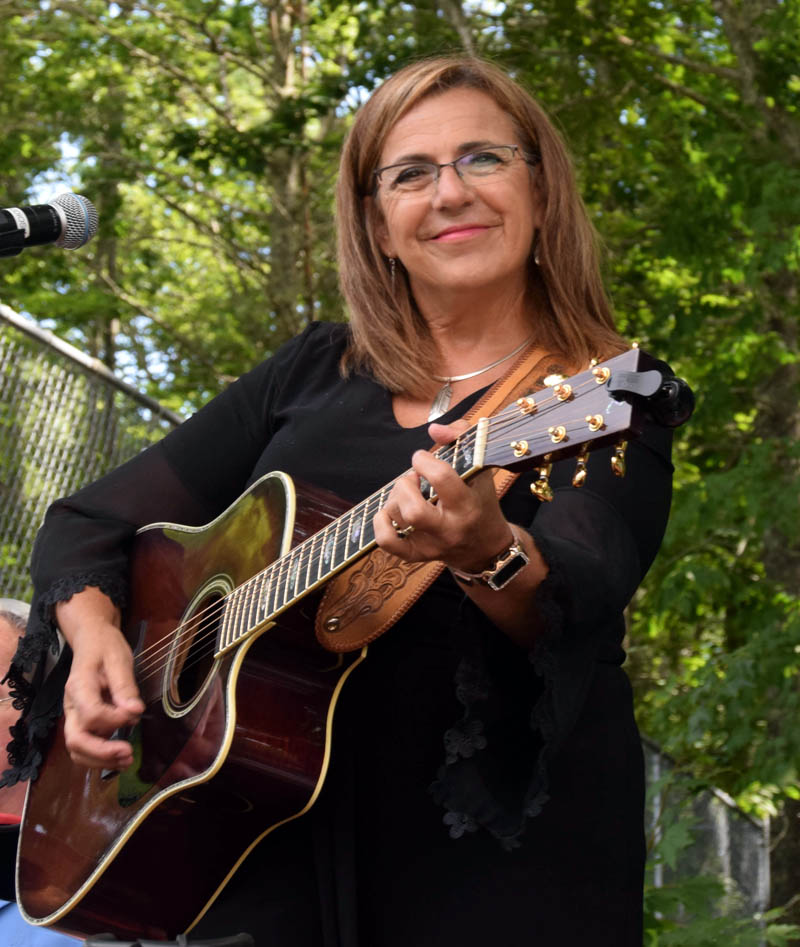 The smells of barbecue chicken and the sounds of live country music filled the air outside the Nobleboro Community Hall for the 50th Annual North Nobleboro Day Saturday, Aug. 13.

Creating the festive atmosphere, Debbie Myers and Redneck Rodeo returned for the 18th consecutive year, performing traditional country music covers and original compositions. The event marked the first time the band and Myers have played together in a year.

“With COVID going on it has been really hard to get back up to Maine and play with the band,” she said.

Myers said the crowd Saturday was “easily one of the biggest” the band has ever enjoyed at North Nobleboro Day. “I hope that we can schedule more shows in Maine,” she said. “I will always do Nobleboro Day; as long as they will have me.”

The traditional barbecue chicken dinner may have also contributed to the large crowd. “I had friends come up to see me and they had to wait in line for about an hour,” Myers said. “That is unheard of.”

Including a side of coleslaw, fresh dinner roll, bag of chips, a drink and a slice of homemade pie, the dinner price remained $12, despite increasing costs, said event co-organizer Ronald Spear. “We agreed to keep the cost of the meal at the same price because everyone in the community is feeling inflation right now,” Spear said.

Chicken hit the grill pit at approximately 9 a.m. and was served beginning at 11 a.m. The grill team was made up of local residents Chris Newbert, Dwight Newbert, Darryn Petersen, Ryley Mercier, and Kevin O’Donnell.

Together they fired up the grill pit, prepped the chicken, and rotated racks while spraying the chicken with a secret ingredient, cooking 750 chicken dinners in just over two hours. According to co-organizer Mitchell Wellman, 550 full dinners and 158 half chickens, with no sides, were sold.

Grilled hot dogs topped with grilled onions, and sides of fries were available for attendees seeking an alternative to chicken.

A wide range of baked goods were also available throughout the event. Donuts, fresh baked pies, and fudge were made and donated by members of the community.

“People from around the community like to make their homemade recipe and donate it to our event,” Spear said.

The community also donated various material items to be sold during the trash and treasures event, and auctions that were held throughout the day.

Trash and treasures was held inside community hall. Community members donated books, small appliances, and kitchen ware that were sold at low prices.

Two auctions were held, starting with a silent auction where participants wrote down their name, contact information, and the bid for the item they sought. Silent auction winners were announced at 1 p.m.

Between 1 p.m. and 3 p.m. a live auction was held with items donated by various business and community members.

The majority of the proceeds from the event go towards keeping community hall open, according to Spear.

“Seventy-five percent of the money we raised goes to keeping the community hall open,” Spear said. “That is for utilities, and upkeep of the grounds.”

The rest of the money is donated to Nobleboro School Central Library, Nobleboro and Jefferson fire departments and used for scholarships to residents going on to secondary education.

The Nobleboro Fire Department was also in attendance, seeking to raise money to purchase a new fire truck and upgrade their fire station, according to fire chief Richard Genthner.

During the event members of the fire department, Matthew Kilpatrick, Max Dixion, Kevin Rawley, and Lin-Wood Rideout would walk around the community hall grounds with a fire boot seeking donations.

North Nobleboro Day was created in 1972 after the community had ended a monthly baked bean supper used to raise money for community hall, according to Spear.

“The community would have a baked bean supper on the first Tuesday of the month,” Spear said. “It became too much to do every month so it was changed to an annual event.”

T-shirts from the 50th Annual North Nobleboro Day are still available for purchase by calling Pam Edwards at 918-637-7398.

The event is traditionally held on the second Saturday in August each year and is expected to be held again next year.

“We expect to hold it as long as we can,” Wellman said.