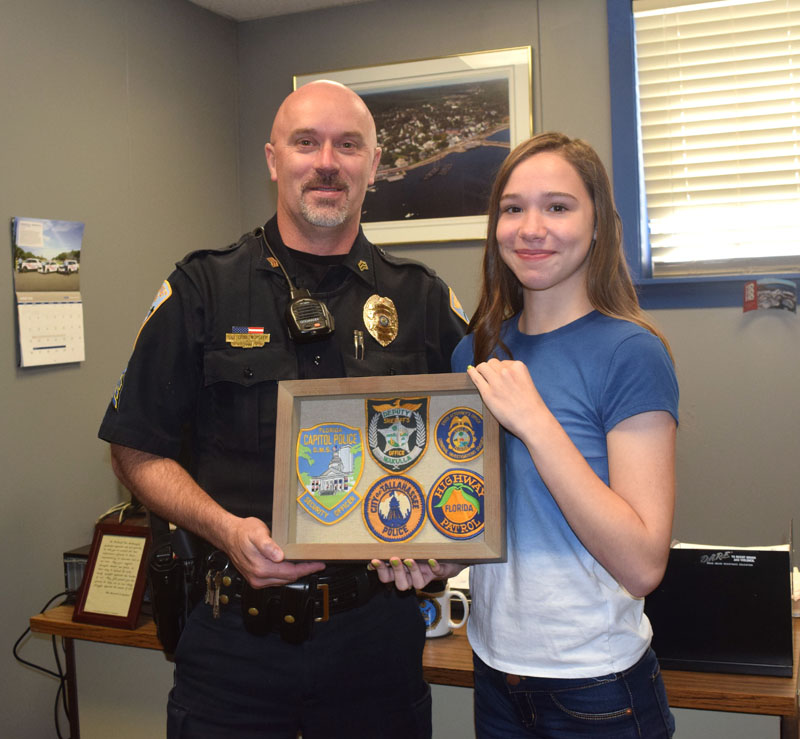 Sgt. Craig Worster receives a gift from incoming Wiscasset Middle High School freshman Alyssa Small. The student made the gift to thank Worster for helping her when she was being bullied. (Jessica Clifford photo)

A student at Wiscasset Middle High School recently presented the school resource officer with a handmade gift, an expression of gratitude for his work to keep her safe from bullying at school.

Alyssa Small, 14, of Westport Island, is an incoming freshman at WMHS. She was bullied by another student for about a year in eighth grade.

The other student, who was in a few of her classes, both physically bullied and verbally threatened Alyssa a few times, she said. In May, she wrote a letter to Sgt. Craig Worster, of the Wiscasset Police Department.

“It was an incident with a student that had some special needs that just had to be reminded that there are lines and boundaries that shouldn’t be crossed,” Worster said of the student who had bullied Alyssa.

Worster talked with the student and the school’s administration. Together, they “worked out a plan so that she could be safe and he could be corrected, so that he knows that’s not OK.”

Within a week, the issue was resolved, Worster said.

Alyssa’s mom, Shawna Small, said Worster “always made the time for her if she asked.”

To show her appreciation, Alyssa made a shadow box containing badges from five police departments in Florida, where she has relatives who work in law enforcement.

Worster collects the badges and is about a dozen short of owning one from each state.

Alyssa also wrote a letter thanking Worster for his help during her eighth-grade year.

“Thank you so much for everything you have done for me this year, it really means a lot to me,” Small wrote in her letter. “You have helped me so much and I’m very grateful, and thank you for just being who you are.”

A school resource officer has a few roles, according to Worster. He is the first person to show up at the school if a crime is committed and he is a “safety net.”

While at school, Worster makes an effort to connect with kids in the hallways, especially those who might be having a bad day. “I think that’s a big part of being an SRO,” he said.

He said he hopes to gain the trust of students who are nervous about bringing a problem to an authority figure.

Alyssa said she has not been bullied again since Worster took action on her behalf. She will go back to school Thursday, Sept. 4.