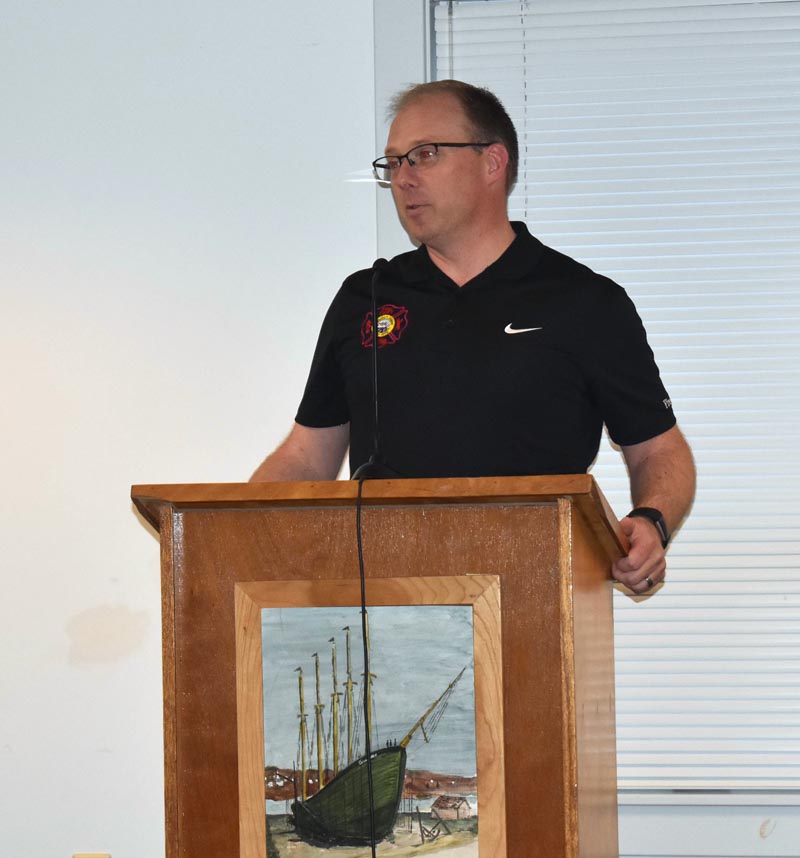 Waldoboro Fire Chief Paul Smeltzer discusses the sale of the town’s 1981 American LaFrance aerial truck to firefighters in Warwick, N.Y. during a meeting of the Waldoboro Board of Selectmen on Tuesday, April 23. (Alexander Violo photo)

A town in New York will buy a 38-year-old ladder truck back from Waldoboro for use as an antique to display in a museum and use in parades.

Waldoboro Fire Chief Paul Smeltzer told the Waldoboro Board of Selectmen about the future of the 1981 American LaFrance truck Tuesday, April 23.

Waldoboro bought the truck from Warwick, a town in the Hudson River Valley of New York. Several months ago, the Warwick Fire Department contacted the Waldoboro Fire Department.

“They heard we were getting rid of it and were interested in getting it back,” Smeltzer said.

According to Smeltzer, Warwick has three fire companies and one of the companies wants the ladder truck for use as an antique parade piece.

Smeltzer said the truck would be housed in a town museum and the purchase would be funded through money raised by firefighters, not by the town itself.

The Warwick firefighters offered $2,500 for the truck, according to Smeltzer, who said a fire truck manufacturer did not believe the town could get anything for it.

“Its only use is as a parade piece and the sentimentality of this made me happy,” Smeltzer said.

Smeltzer said the New York firefighters couldn’t believe the good shape the vehicle is in. The truck will take part in a town anniversary celebration in August.

“They are going to paint and repair it for the celebration,” Smeltzer said.

Robert Butler, chair of the board of selectmen, asked where the money from the vehicle’s sale would go.