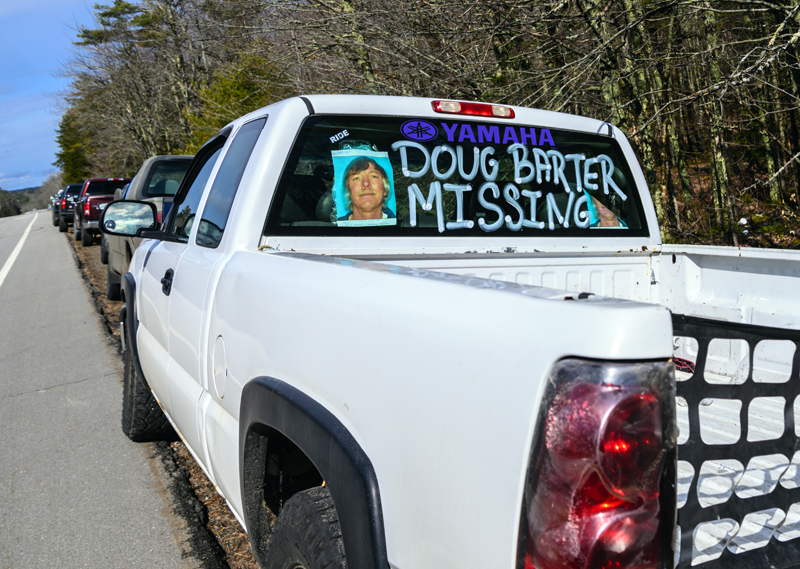 The rear window of a pickup truck reminds the community that Douglas Barter is still missing in Waldoboro on April 9. (Bisi Cameron Yee photo, LCN file)

“The weather worked well for the search,” said Sgt. Josh Bubier of the Maine Warden Service. “It was perfect – sunny conditions, a decent breeze, which helps the dogs carry the scent.”

Barter, 54, has been missing since Nov. 8, 2021, when he left the Miles campus of LincolnHealth in Damariscotta against medical advice, according to a Nov. 16 interview with Waldoboro Police Chief John Lash.

Prior searches at the time Barter disappeared, including a marine search, came up empty.

A community search organized by friends and fellow clam diggers on April 9 focused on the area around the hospital and an area around the trailer park at Lady Slipper Lane where Barter lived. That search also turned up no evidence regarding Barter’s fate.

Bubier said that after reviewing the area where Barter disappeared with the Waldoboro and Damariscotta police departments, “it was just natural to think he might have been trying to walk or get back home.” Route 1 is the most direct route that Barter could have taken, and the Route 1 corridor became the focus of this latest search.

Canine units from the Warden Service and from non-profit volunteer organization Maine Search and Rescue Dogs (MESARD) searched over seven miles from Damariscotta through Nobleboro and into Waldoboro, covering both sides of the road up to 100 yards in. They also searched a few smaller blocks in and around Waldoboro.

The teams met in Damariscotta around 8 a.m and set up a command post at the police department there. Waldoboro police provided logistical support and a cruiser to help keep speed down on Route 1 during the search. The dogs work off leash, which Bubier said is always a concern when searching highways.

Canine handlers are generally assigned an area, a 40-60 acre block of woods or a one to two mile section of road. Bubier said they work the dog into the wind to cover as much ground as possible. If the wind is blowing right, dogs can scent from up to a quarter or a half a mile away from the source.

According to Michelle Fleury of MESARD, six months is not a long time when it comes to search efforts by the specially trained and certified dogs.

She said it’s not uncommon for searches to be suspended over the winter when weather can impede the ability of the dogs to obtain a scent. Since snow can preserve evidence, and bugs and predators are less likely to impact a scene over the winter, spring searches still have the potential to be productive.

Fleury said MESARD’s teams have searched for people who have been missing for years. Dogs are even deployed in historical grave searches, some graves more than a century old.

The canine team members, mostly black and yellow labs or German shepherds with occasional bloodhounds or Rottweilers, are trained in multipurpose searching which can include tracking, air scenting, evidence recovery, and human remains detection. They are certified by the Maine Association for Search and Rescue and spend an average of 16 hours of training per month.

Fleury said there has been a marked decline in the need for their services since cell phones and GPS became prevalent. Most often they partner with the Maine Warden Service when more resources are needed to perform an area search for a person who has been reported missing.

According to Fleury, 99% of what the dogs do is clear areas, confirming that the missing person is not within the search grid. GPS tracking is used to leave a bread crumb trail of the area covered, and to create detailed maps that help determine locations that still need to be searched.

“In Maine we have a lot of tough terrain,” Fleury said. “The variables are many and they affect how the scent moves. On a nice cool, dry day with a nice breeze, scent travels. In thick vegetation on a hot, humid summer day, scent won’t travel as far.”

While a dog can be 95% effective in training, those results don’t always translate to the real world. “It’s a tool that is used like anything else,” Fleury said. “But with the Warden Service’s planning and execution, we’re pretty successful in the state at bringing people home.”

The search for Doug Barter ended at 3:30 p.m. at the intersection of Route 1 and Route 32, with no sign of Barter found.

“At this point, it’s somewhat of a needle in a haystack,” Bubier said. Searches are more difficult when there’s no specific “place last seen,” no abandoned vehicle to indicate direction. “When people leave on foot, where do you start?”

“The situation is an unfortunate one,” Lash said in an April 25 email. “I really wanted to get some closure for his mother and his friends. “Being a small department, we rely on state agencies to help us out, which they have done … That being said, we need new leads.”

If credible information comes up that warrants another search, Bubier said the Warden Service is open to searching again.

Barter was last seen wearing blue jeans and a navy-blue sweatshirt with a marijuana leaf on the back. He is 5-foot-7-inches and weighs around 150 pounds. Community search organizer Brian Bennett said Barter usually wore white gym shoes and carried a gray and brown bandana in his pocket.