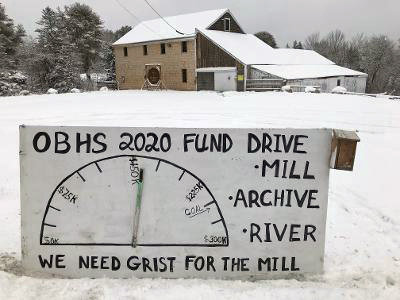 It can be a challenge to see the potential of the Pemaquid Mill while exploring its dusty caverns, but with a few hundred thousand more dollars in its reserve, the path to realizing that potential has become a lot clearer for the Old Bristol Historical Society.

The funds will go towards the reconstruction and renovation of the historic Pemaquid Mill, the new Bristol History Center, and a riverside park abutting the mill at 2089 Bristol Road. 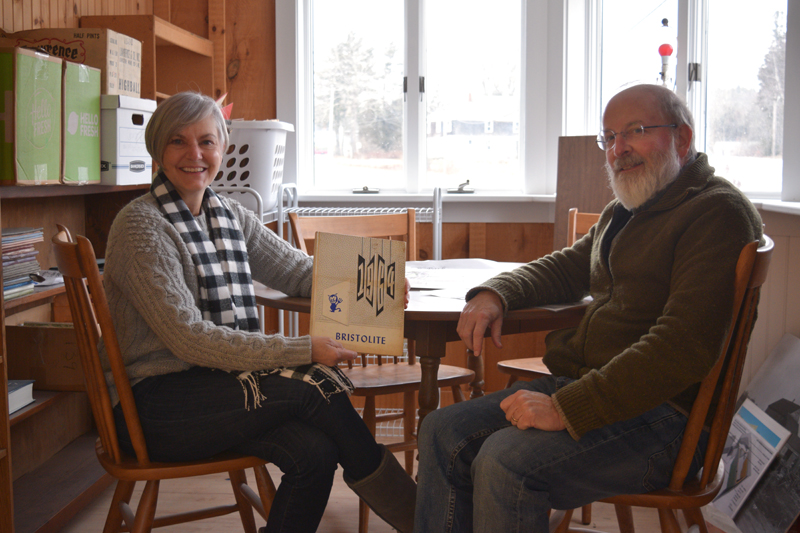 Compared to other, smaller historical societies around Lincoln County, the Old Bristol Historical Society has experienced great success since it was founded in 2003. The Pemaquid Mill and the falls that it overlooks are a big part of that success. The mill exists at an intersection of Bristol’s industrial, natural, and native history, making it a place where lots of different parties’ interests intersect, as well.

“It has a lot to do with the location, no doubt about it. Being right here, in one of the oldest areas of Pemaquid, and the history of Bristol on this river that has been used here for so long makes it just perfect,” Bobby Ives, president of Old Bristol Historical Society, said. 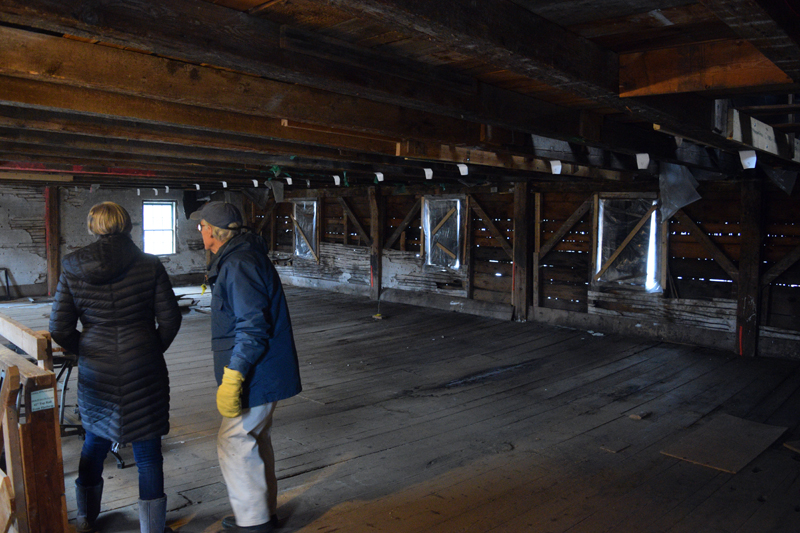 The property was most recently home to Poole Brothers lumber from 1923 until around 2010, and then LaValley Lumber Co. and Hammond Lumber Co. Hammond closed its location at the property in July 2018.

The former lumberyard store and office, well into the process of being remodeled, will serve as a history center and headquarters for the historical society, featuring an exhibit space, reading room, archival vault, and an ADA-compliant entrance and bathroom. 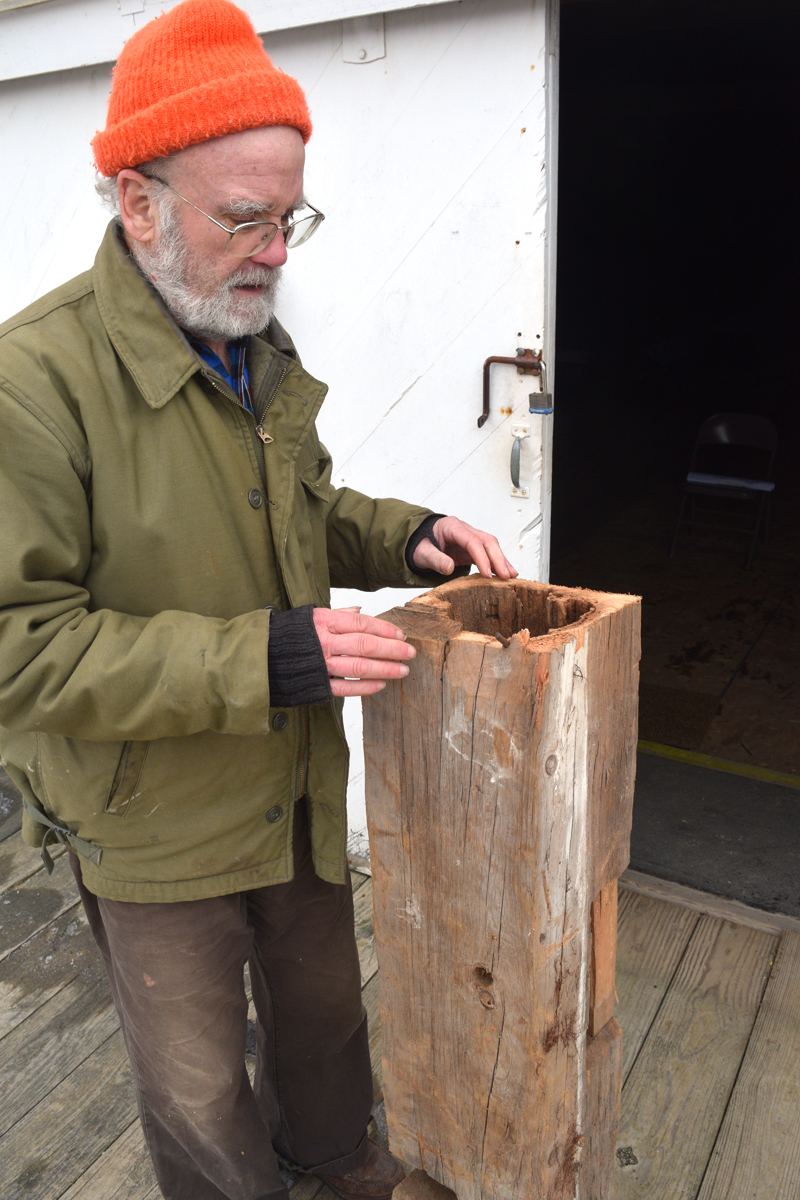 Historical Society Board Member Phil Averill shows off a piece support beam from the Mill at Pemaquid falls to show how it is rotting on the inside on Jan. 13. (Nate Poole photo)

This historical society will open the doors to its history center in June. Visitors will be able to access historical materials, be it town reports or old school yearbooks, in the reading room and engage with an exhibit comparing images of Bristol’s different villages in the early 20th century and a century or so later. Collections Committee Chair Chuck Rand came up with the idea for the exhibit and is responsible for curating it.

Ives hopes to have the history center’s archival vault completed by June, as well; the 10-by-30-foot vault will be waterproof, fireproof, and temperature controlled for the long-term preservation of materials, photographs, and town records.

Aside from the history center, the flagship undertaking of the historical society has been the repair of the 19th-century Pemaquid Mill. By June, the organization hopes to have significant pieces of the mill repaired and open with new exhibit areas in the mill for visitors to explore and learn about the history of the grist, carding, and saw mills it has housed.

The historical society’s intention is to restore the building to its appearance in the 19th century, inside and out, with some of its same operational mechanisms, but volunteers and contractors still have a long way to go before the entire three-story structure is open to the public.

“We’re not making this stuff up. We’re trying to be as historically accurate as we can be but still be practical in how we’re putting things together,” Phil Averill said.

On Jan. 13, Averill, chair of the mill committee, said that the building is safe and structurally sound- it bore tons of lumber for years – but the bones of the structure need to be replaced and leveled to make sure it stays that way for years to come.

To replace the posts, contractors will remove the entire south-facing wall of the building and rebuild it with new supports and whatever shingles, boards, and windows are in good enough shape.

“We could leave the posts in there; they’re good for another 30 years… before it has structural problems. We’ve got the siding stripped off and we’ve got the money and we’re all there, we might as well fix them right,” Averill said.

During a tour of the mill, Ives pulled a lever to the left of the building’s first floor entrance, causing a hulking gear attached to a winch at the other end of the room to shudder and move. Seeing any of the mechanisms in the old wooden building move can be startling, but it is also a sign that there is still some life in the mill for Averill and volunteers to reinvigorate. 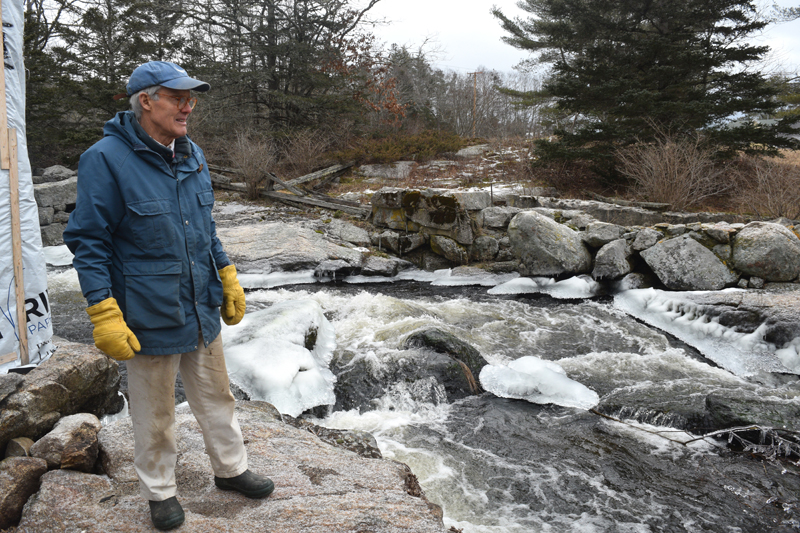 Historical Society President Bobby Ives gazes at the Pemaquid River as he discusses the future of the park that will eventually be installed on the shore next to it. (Nate Poole photo)

Averill noted that while he knows more than enough about the mill’s history to provide ample interpretation for newcomers, much of it has yet to be unearthed. Most notably, there is no specific record of when the structure was built.

In addition to the mill, the historical society plans to install a park on an acre of land on the banks of the river. Much of the parcel is currently overgrown with invasive shrubbery and other parts are partially paved or covered in concrete or asphalt. 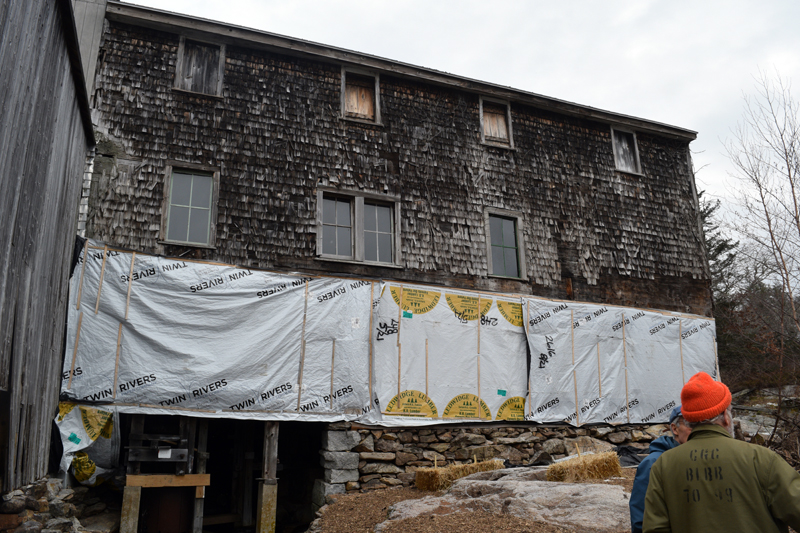 The Old Bristol Historical Society plans to temporarily remove the rear wall of the Mill at Pemaquid Falls to replace the support beams that are rotting inside. (Nate Poole photo)

Ives hopes to rip out anything historically inaccurate or undesirable and replace it with vegetation that belongs in the local ecosystem in an effort to preserve both local and natural history. The small park will also feature observation areas, trees, gardens, benches, and walking paths. Ives said that the society may begin planning the work in earnest in a year’s time.

The historical society and Coastal Rivers Conservation Trust have a Memorandum of Understanding that expresses that the property is to be used to preserve local history and natural resources. Two members from Coastal Rivers serve on the committee preparing for the installation of the park to help ensure that the process benefits the local environment.

Averill and Ives emphasized that the historical society wouldn’t have met its fundraising goals or seen any of its success without the dedication and passion of its volunteers. 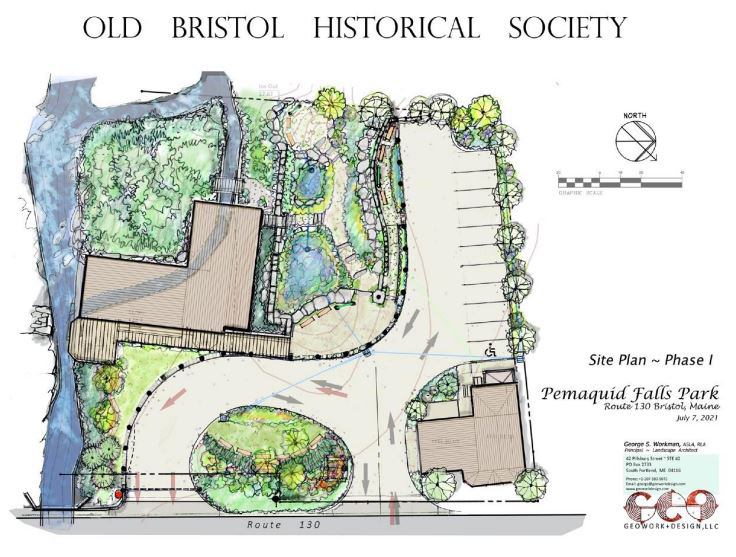 The most recent example is a significant donation from Margaret Hayter near the campaign’s deadline. Two weeks before the end of December, Hayter, a member of the society’s board of directors, made the final donation in honor of her late husband, Larry Hayter, to get the campaign to its $250,000 goal.

Larry Hayter was a dedicated board member, and he was responsible for producing all of the historical society’s publications, many of which appeared in The Lincoln County News. He passed away at the end of November.