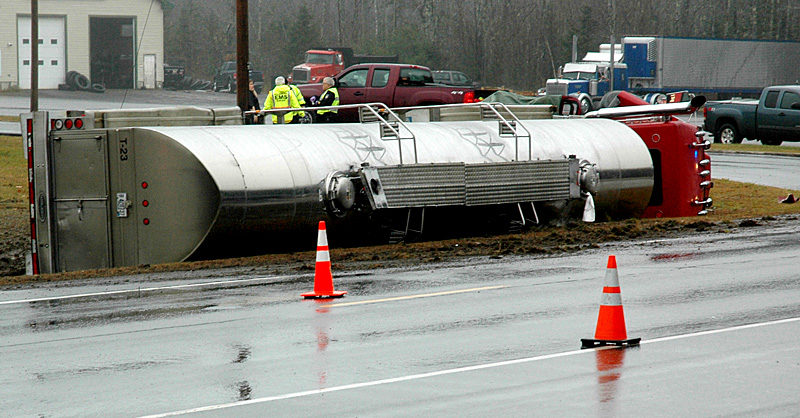 A milk truck lies on its side after a fatal collision with a pickup truck on Route 1 in Waldoboro the morning of Wednesday, Nov. 16. According to Waldoboro Police Officer Larry Hesseltine, the victim of the crash was the operator of the pickup. (Alexander Violo photo)

A 79-year-old Waldoboro man – a former U.S. Army ranger and popular substitute teacher at Medomak Valley High School – died in a collision with a tractor-trailer on Route 1 in Waldoboro the morning of Wednesday, Nov. 16.

Rody Conway, 79, of Waldoboro, was exiting the parking lot of Bullwinkle’s Steakhouse in a 2005 Chevrolet Colorado pickup to go south on Route 1 when he pulled into the path of a northbound 1999 Kenworth tractor-trailer, a milk truck driven by Andrew Pierce, 31, of Palmyra, and registered to Lyle Pierce Inc., of Newport, according to the Waldoboro Police Department.

Waldoboro Police Officer Larry Hesseltine said the tractor-trailer swerved into the southbound lane in an attempt to avoid a collision, but was unable to do so and “T-boned” the pickup.

Hesseltine said both vehicles traveled approximately 100 feet after the collision before coming to rest on the edge of the southbound lane. The tractor-trailer came to a rest on its right side with the pickup truck stopped to the front and left of the larger vehicle.

Conway was not wearing a seat belt and died at the scene from injuries sustained during the crash, according to Waldoboro police. Pierce was not hurt.

Hesseltine said the drivers were the sole occupants of each vehicle at the time of the collision.

The cause of the accident is under investigation, but no criminal charges are expected. 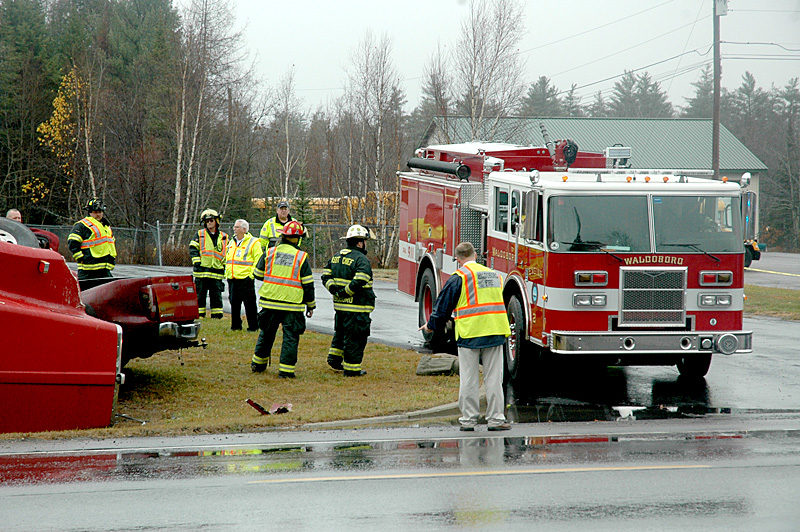 Waldoboro firefighters work at the scene of a fatal accident on Route 1 the morning of Wednesday, Nov. 16. (Alexander Violo photo)

The Lincoln County Communications Center dispatched crews to the scene at 9:34 a.m.

The Waldoboro Fire Department closed one lane of Route 1 for more than eight hours while workers removed the vehicles.

According to Medomak Valley High School Principal Andrew Cavanaugh, Conway was a substitute teacher at the Waldoboro high school for about 17 years.

Cavanaugh said Conway’s specialty was social studies and he was a wealth of knowledge regarding anything to do with history.

“It was like a two-way street. The kids really benefited from having him as a teacher. They cared deeply about them as he did for them,” Cavanaugh said.

The principal said Conway forged close relationships with his students, from those in his social studies classes to those in the school’s life-skills program, with whom he would visit in the morning.

“He always had time for every kid,” Cavanaugh said. “They meant a lot to him.”

Cavanaugh said Conway brought a wealth of experience to MVHS and provided the school’s students with an international perspective.

“He was a real institution. He had an amazing impact on a lot of our students. He will be missed,” Cavanaugh said.

Conway was born in Galveston, Texas and grew up in a military family, traveling widely before graduating from the U.S. Military Academy at West Point, N.Y. in 1959.

Conway served two tours of duty during the Vietnam War and was the recipient of the Bronze Star, among several other decorations.

Lt. Col. Conway retired from the military in 1983, after serving attache duties in India and living in Colombia. He taught high school history in Dade County, Fla., before moving to the Midcoast.

“Mr. Conway started substituting to keep active, and he really enjoyed working with us for a very long period of time,” Cavanaugh said.

Cavanaugh, who started teaching social studies the same year Conway started at Medomak Valley, said Conway built close relationships not only with his students but also with other members of the social studies faculty.

“He was just such an interesting man. He went out of his way to help people,” Cavanaugh said.

The principal described Conway as a man of many talents and an avid and skilled tennis player who spoke Spanish and Vietnamese.

“He was a man’s man, but at the same time he was a renaissance man,” Cavanaugh said.