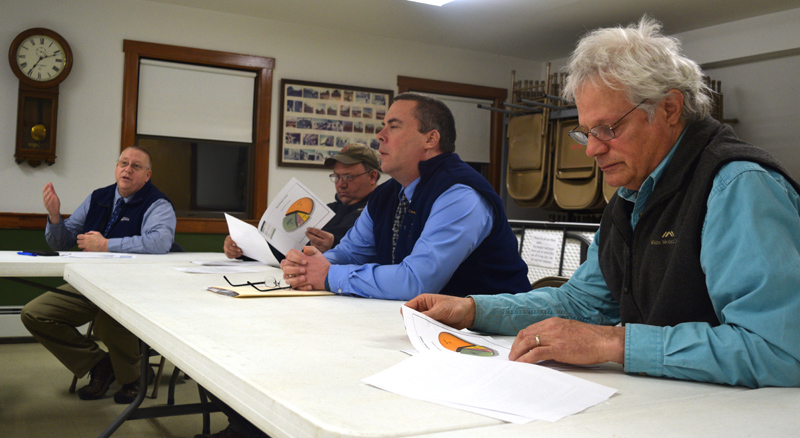 With the exception of one suggestion for a revision, there was little resistance to new ordinances on false alarms and food sovereignty during a public hearing in Alna on Tuesday, March 12.

The bulk of discussion at the hearing focused on the false alarm ordinance. Both ordinances will go to voters at the annual town meeting in March.

“Thank you for your work, for being a pioneer for us. We appreciate it,” Lincoln County Sheriff Todd Brackett said at the hearing.

Baston and Maker started discussing the idea around November 2018, after the high volume of calls for false alarms came up during a meeting of the Lincoln County Budget Advisory Committee.

“It seemed to me, and several other selectmen that talked, that there is an easy fix to this,” Baston said, referring to the fines in the ordinance.

The sheriff’s office’s records system would track alarms, Brackett said. The agency’s administrative staff will look at the log each day to see which calls were alarms and which calls for alarms were from a property with previous calls for false alarms. Fines would be mailed.

The county cannot pass an ordinance, but each town could adopt the same or a similar ordinance, Baston said.

Though some Lincoln County towns have March town meetings, Baston said, “If we get it adopted in Alna and get some publicity around it, it can build some momentum for the other towns.”

Brackett handed out alarm statistics focusing on the Lincoln County towns without their own police departments.

The sheriff’s office received 683 calls for alarms, including both burglary and fire alarms, in 2018.

Boothbay was responsible for the highest number, at 161. Dresden had the least, at 15. Alna had just one more.

“They don’t have a lot of false fire alarms in the town, so it’s not a pressing issue for the fire department, I understand that,” Brackett said. “I didn’t want it to be another burden on the town. That’s not our goal. That’s why we offered to administer the ordinance. Our goal isn’t enforcement. Our goal is really voluntary compliance. Get the information out there … and give us some teeth to take action if we have to as a last resort.”

The ordinance would benefit the budget and free up time for LCSO personnel to spend on more pressing work, Brackett said.

“This is pretty standard, boilerplate type of language, similar to what other municipalities have adopted around the state. Alarm ordinances like this are really common,” Brackett said.

He added the ordinance is not supposed to be a “money maker,” and any revenue would go back to the town.

The sheriff will attend the annual town meeting to answer voters’ questions, he said.

The ordinance states that if an alarm user fails to pay penalties assessed by a court, after exhaustion of appeals, law enforcement or fire services may decline to respond to alarm signals that occur at the property until payment or compliance is achieved.

“The way I’m looking at this, I think just because someone has a lot of false alarms doesn’t mean they can’t have a genuine one,” Pentaleri said, adding later that this could cause a liability if the sheriff’s office did not respond.

He said the office already has the discretion to prioritize calls, so it is unnecessary to include this language.

Maker said the change would not be “a deal breaker” for him.

Pentaleri asked if the sheriff’s office would want other towns to adopt the ordinance before enforcing it.

“Alna would be a great (town) to start with. Quite honestly, with the volume, it would be a great way for us to learn our way through it. I think we are prepared to start immediately once we get authorization to enforce the ordinance,” Maker said.

Alna Fire Chief Michael Trask said he does not think the ordinance would have much impact on him or the fire department.

“Ultimately I don’t think it’s going to affect the fire department one way or the other. We’ll still respond to whatever calls (people) have,” Trask said.

There was less discussion on the food sovereignty ordinance.

Food sovereignty has been a growing trend since the passage of a state law to allow the practice in 2017. The law gives towns the options to allow direct exchanges between food producers and consumers without licensing.

Alna’s ordinance is based on the state’s model ordinance.

Resident Chris Kenoyer successfully petitioned to get the ordinance on the ballot.

“Why I think it will work so well in our small town is that it’s based on trust … I hope it will foster more gleaning from gardens, less loss. When people have extra tomatoes, they’ll trade them for our extra beets and garlic. And things will happen more locally,” Kenoyer said.

He said he is aware of potential problems with drinking raw milk. He suggested that people educate themselves of the health risks.

Kenoyer said the only person who declined to sign his petition was an epidemiologist, or a person who studies diseases within a population of people.

“He may show up at town meeting and he may have some things to say,” Kenoyer said. “I kind of hope he does. I think it should be out in the open and we answer questions.”

The ordinance does not cover sales at a farmers market.

Around 10 people, including the selectmen, attended the hearing.