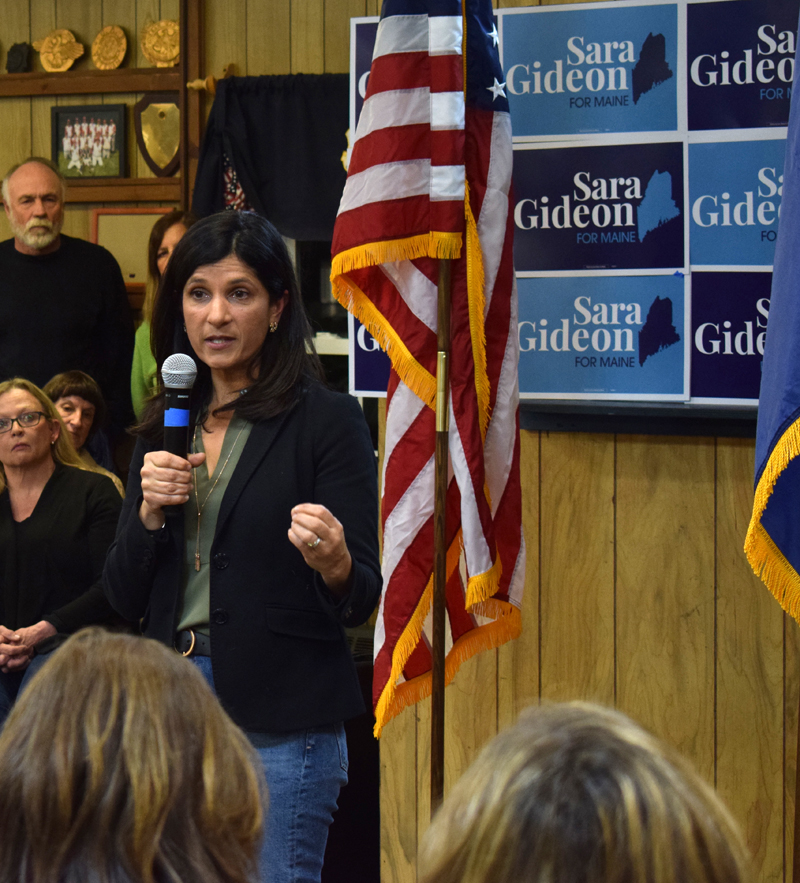 Sara Gideon, Democratic candidate for U.S. Senate, speaks to a crowd of more than 250 during a campaign stop at the Wells-Hussey American Legion Post No. 42 in Damariscotta on Monday, Feb. 10. (Evan Houk photo)

More than 250 people packed the Wells-Hussey American Legion Post No. 42 in Damariscotta for a bean supper with Sara Gideon, a Democratic candidate to represent Maine in the U.S. Senate, Monday, Feb. 10.

At 5:30 p.m., when the event kicked off, the hall was already packed and there was a line of nearly 30 people waiting outside to enter.

State Rep. Holly Stover, D-Boothbay, introduced Gideon to the rapt crowd as they munched on baked beans, hot dogs, and cookies provided by the campaign.

“She is a leader. She is going to lead us all the way to Washington and we’re going to need everybody in here to help us make it happen,” Stover said.

Gideon, of Freeport, stressed the importance of community engagement and transparency throughout her initial speech, prior to opening up the floor for questions.

“Our ‘Suppers with Sara’ that we are doing all across this state are based on having supper together, but they’re really about having a conversation. They’re our version of a town hall and making sure that I, as I ask you to think about letting me represent you, that I understand what’s happening in all our lives, no matter where we live or who we are,” Gideon said.

Gideon said she never planned on running for public office until listening to a phone message about 11 years ago. Someone left a message for her husband, imploring him to run for town council.

The message inspired Gideon to run for town council herself. 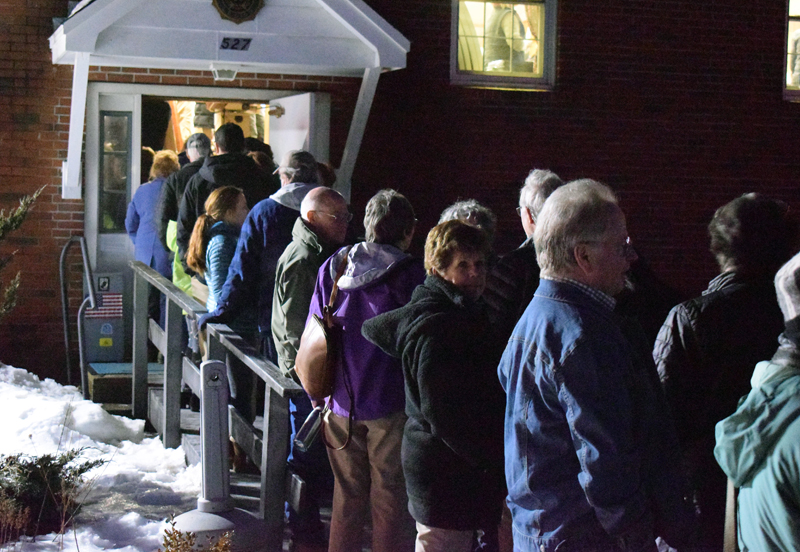 People wait outside the Wells-Hussey American Legion Post in Damariscotta to enter for an event with Sara Gideon, Democratic candidate for U.S. Senate. (Evan Houk photo)

“My next thought was that actually, I think that’s a job for me and I think it’s a place where I can really make a difference in our community,” Gideon said.

Gideon stressed the importance of bipartisanship and the ability to work across the aisle.

“Whether it was on our seven-person town council in Freeport, where similar to your towns, we didn’t have Democrat or Republican next to our name, or whether it was in the State House or during my years as speaker, what I have learned is that if you’re willing to listen and if you’re willing to sit down, especially with the people you think you disagree with the most, it is still really possible to get things done,” Gideon said.

Gideon reflected on the rearrangement of the seats in the Maine House of Representatives so Democrats and Republicans are no longer divided by an aisle, which she pushed for last year against opposition from both parties.

“Not only did the sky not fall, but I will stand at the rostrum and look out at people and I will see them — imagine this — talking to each other, sometimes laughing,” Gideon said to cheers and applause. 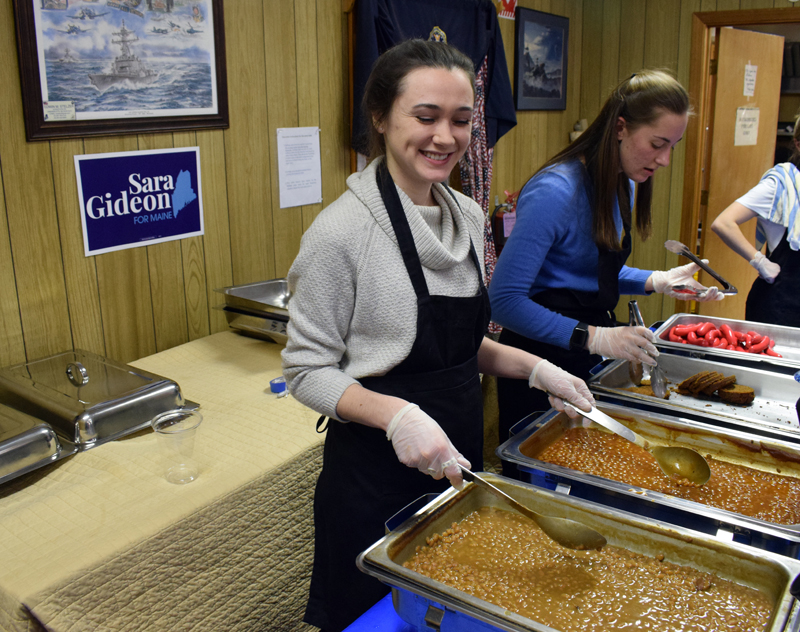 After her initial speech, Gideon took questions from about 10 people in the crowd, most of whom appeared to support Gideon and her stances.

Terrie Frisbee, of Newcastle, said Collins has not held a town hall meeting in more than 20 years.

“I hope tonight is indicative of exactly what I plan to do, which is to make myself always available to constituents in a way that I am not only just meeting with them as individuals, but where everybody can take part and where everybody can ask the tough questions,” Gideon said.

Ernie McNiff, a Damariscotta resident and U.S. Air Force veteran, expressed concern about the withdrawal of the U.S. from the Iran nuclear agreement.

Gideon called the decision to pull out of the agreement a mistake. 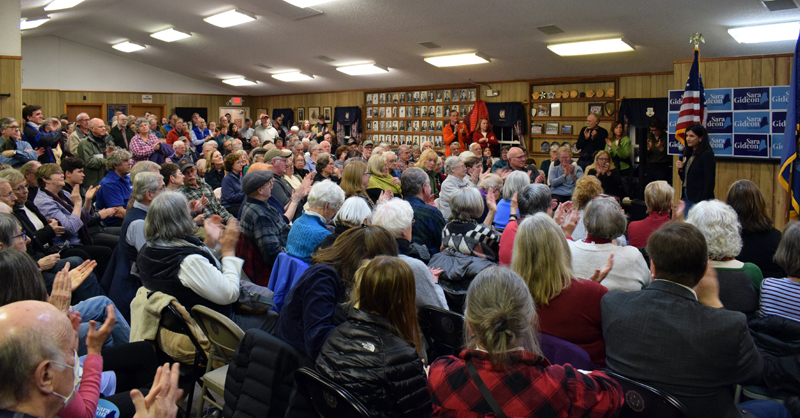 More than 250 people attended a campaign event for Sara Gideon, Democratic candidate for U.S. Senate, at the Wells-Hussey American Legion Post No. 42 in Damariscotta on Monday, Feb. 10. (Evan Houk photo)

Gideon said she will charge into the Senate knowing climate change is an emergency that needs immediate attention.

She also emphasized her commitment to a strong educational and social support system for children as a “north star” that guides her decisions.

“That is my fundamental belief, that every child in this country is not somebody else’s child far away, but our own child. There shouldn’t be a day on our watch where there is a child who is hungry, or without a home, a child who is in fear or in danger when they go to their classroom to simply try to learn. Those are my guiding principles and that’s what you can count on from me when I vote or make any decisions in the United States Senate,” Gideon said.

“Mainers are ready for a new U.S. senator,” Gideon concluded, to cheers and applause.

The Damariscotta event was the 16th bean supper Gideon has hosted in towns throughout Maine.

Will Simons, press secretary for the Gideon campaign, said the campaign will return to Lincoln County in the future.