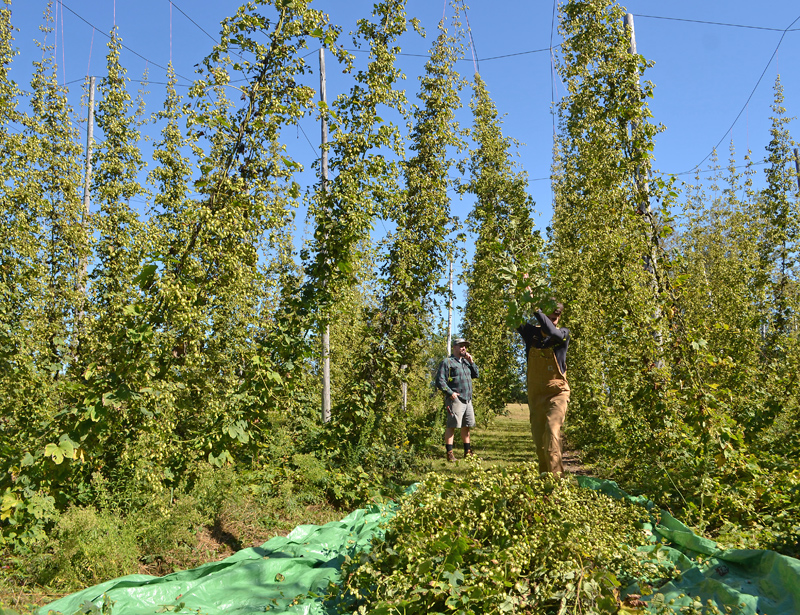 Oxbow Brewing Co. employees spent the better part of Sept. 13-14 at the Alna Hopyard and Farm harvesting hops for a beer the brewery makes once a year from only Maine ingredients for its Goods From The Woods celebration.

The Newcastle brewery is one of just a few breweries in the state that has the ability to harvest and brew beer using fresh, local hops within 24 hours, according to head brewer Michael “Mike” Fava. Fava was one of three employees at the hop yard the morning of Wednesday, Sept. 13, but many employees participated in the harvest over the two-day period, he said.

Mike Barker owns and operates the hop yard and farm, which is just over 3 miles away from Oxbow’s Jones Woods Road location. Barker first contacted Oxbow about his hops almost six years ago, when he began growing the plants.

“One day this business card showed up at the brewery that just had a phone number and the words ‘hop yard’ typed on it from a typewriter,” Fava said. “We gave it a call, met Mike, and have been working with him ever since.” 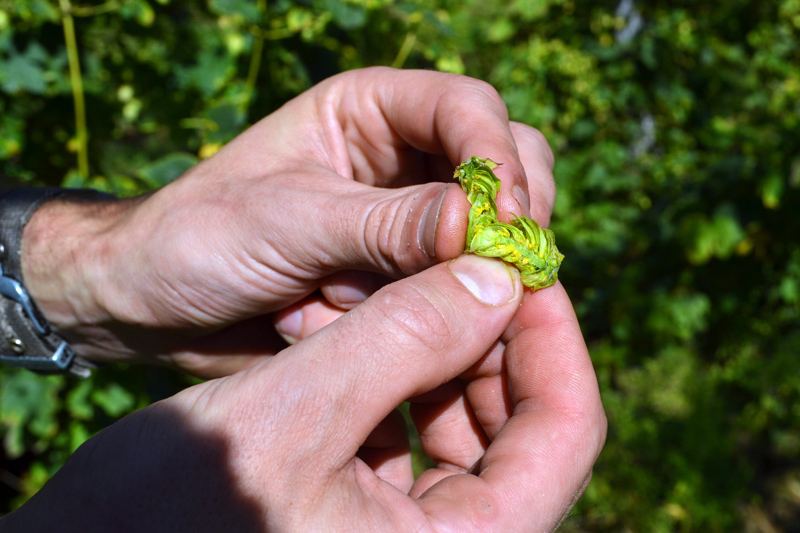 The inside of a hop from the Alna Hopyard and Farm. The lupulin glands, which resemble yellow pollen, give the hop its aroma and flavor. (Maia Zewert photo)

Oxbow uses the hops from Barker’s hop yard to create its Harvest beer using a “wet-hop process” in which the hops are harvested and brewed the following day, Fava said.

When dried, hops can last up to three years, however, hops harvested for wet-hop brewing must be used almost immediately to prevent the hops from going bad, Barker said.

The window for wet-hop harvesting ranges from the end of August through the first few days of October, Fava said. In order to make sure they don’t miss that window, Oxbow employees visit the farm for weeks leading up to prime harvest time to check the hops.

Barker called the Oxbow employees “beer scientists” for the care they take in considering a hop’s aroma and taste and the impact it will have on a beer.

Typically, the brewery looks for hops to have a lemon and citrus-forward scent with a floral scent in the background, Fava said. This year, the hops have an unusual aroma the harvesters deemed “smoky lemon,” Barker said. 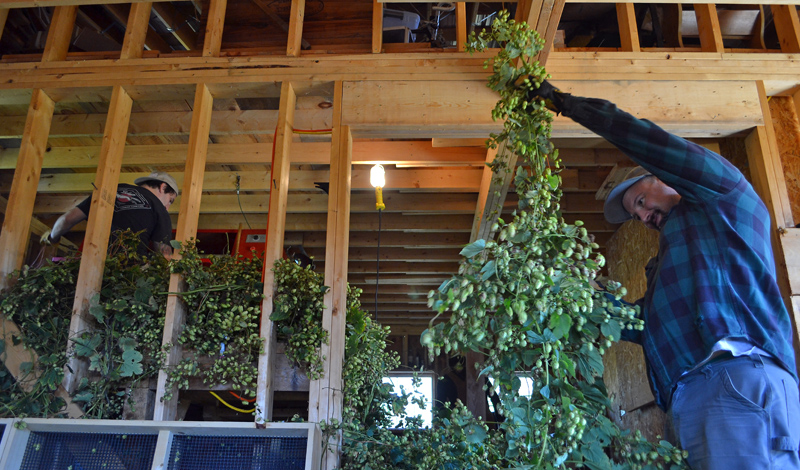 Michael “Mike” Fava, head brewer for Oxbow Brewing Co., trims a hops plant at the Alna Hopyard and Farm. The plants were then fed through a machine, which removed the hop flowers from the bines. (Maia Zewert photo)

To test the hop’s aroma, the Oxbow employees break the pinecone-like plant to smell the lupulin glands inside. The glands, which have a yellow, pollen-like appearance, are where the resins and essential oils of the hop reside.

Hops take about three years to fully develop, growing in a helix shape known as a bine. The plants grow around a thin string over 20 feet tall before harvest, which is accomplished by cutting the bine at its base and ripping the plant from the string.

After collecting some of the bines, the plants are brought to a building where they are cut into 3-foot strands and fed through a machine that removes the hops from the plant. If done by hand, the process of removing all the hops from just a single plant would take hours, Barker said.

The hops are then briefly stored until the day’s harvest is complete, when they are brought back to Oxbow and brewed.

“It’s really an amazing and special process, and we love being able to come out here and work with Mike to make this happen,” Fava said.

Barker said he hopes to continue to produce hops on the farm for a long time.

“Hops are a complicated crop, and a lot of things have to happen for them to grow successfully, healthily, and to make damn good beer, and the land here is perfect for that,” Barker said.

For more information about Oxbow’s Harvest beer or the Goods From The Woods celebration on Saturday, Oct. 21, go to oxbowbeer.com.