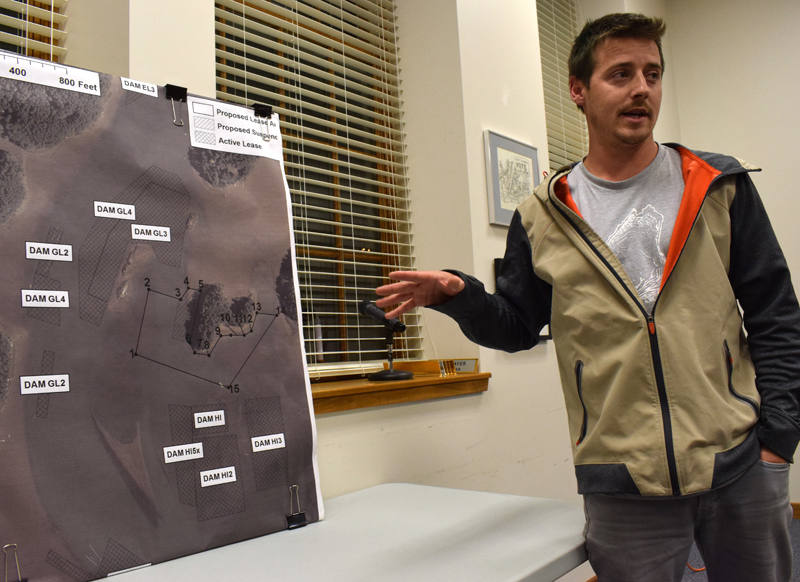 A company owned by Nobleboro oyster entrepreneur Brendan Parsons is applying for a new 20-year, 12.98-acre aquaculture lease in the Damariscotta River.

A public hearing about the application from Black Stone Point Oysters LLC for the lease in the area of Hog Island in Damariscotta drew some discussion Oct. 23.

During his testimony at the hearing, Parsons said his companies are growing – they have sold over 190,000 oysters so far this year and anticipate selling 200,000 more by year’s end.

Parsons said Black Stone Point started farming oysters in 2016 in the northern part of the Damariscotta River. The new lease would surround the southern part of Hog Island with mostly “bottom culture” gear, or growing gear on the river bottom.

Approximately 1.95 acres of the lease will have suspended gear, or gear on the surface, in a small area between Goose Ledges and the western shore of Hog Island.

Parsons plans to farm American oysters, European oysters, and northern quahogs. He said he is one of the owners of the island.

“This lease that is going around that island on the east side is really going to limit tacking on that side of the island,” Bryant said.

Parsons said the only surface gear would be on the west side of the island and would not hinder sailing.

“We do have a rich history of boats and sailing boats here in the river. So, when I was planning out this lease, I was very conscious of that and tried to hug the gear to the island,” Parsons said.

Flora Drury, of the Maine Department of Marine Resources, testified at the hearing, explaining the findings in the department’s site report.

“Our role in the leasing process is to visit proposed sites like this one, assess the site through the lens of our 10 decision criteria that have been described today, and write a site report of our findings,” Drury said.

DMR staff did not observe any commercial or recreational fishing activities “within or in the immediate vicinity of the proposed lease site” during a site assessment April 18, according to its report.

“Except during the time when Black Stone Point Oysters LLC would be actively working on the site, the proposal is unlikely to hinder recreational fishing in the area,” the report states. The report says the majority of the lease site would be free of gear.

Karen Guttenplan, of Damariscotta, expressed some frustration about the proliferation of oyster farms on the river.

“I was just wondering when it’s going to stop. Are we just going to cover the whole river in plastic, maybe? … Is there any end to this?” Guttenplan said.

Guttenplan said surface gear affects the view of the river from her friend’s house.

Drury said the DMR looks at 10 criteria to determine the impact of every aquaculture lease.

“But we don’t have a specific number, once we hit a certain number that means there’s no more – that’s not how it works. Instead, we consider each application, we think about it critically, using those decision criteria, using what people have said, and make a decision based on that,” Drury said.

Drury said the view of people who live on the water is not one of the decision criteria.

The “visual impact” section of the DMR’s site review mentions a 12-by-16-foot raft that will be installed on the lease site and used to sort and grade oysters, dry gear, and hold wet-storage bins. A 10-foot-tall white tent structure will sit on the raft. The whole structure will rise about 12.5 feet above the water line and meet DMR’s height limitations.

The next step for the lease application will be a review of all the available information and a draft decision by Erin Wilkinson, aquaculture hearings officer with the DMR.

Wilkinson said she hopes to have a draft decision within about four months.