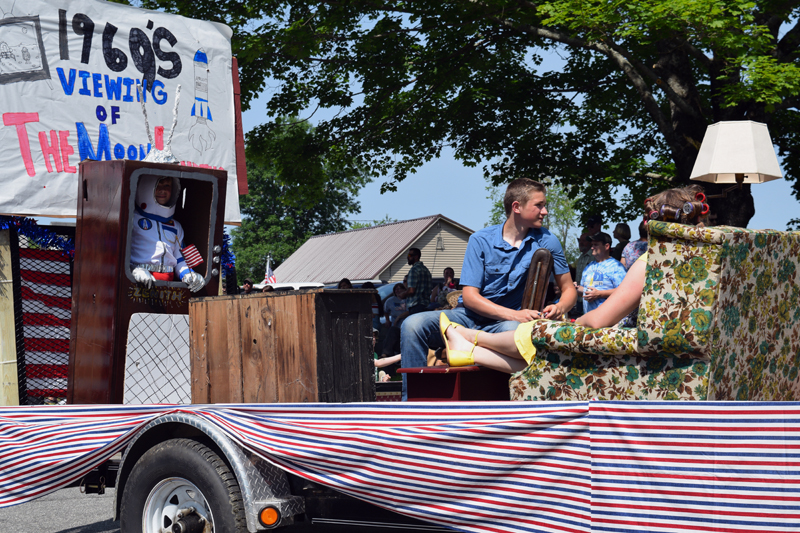 A float celebrates the 50th anniversary of the 1969 moon landing during the Fourth of July parade in Whitefield. The float depicts people in period dress watching the event on TV. (Jessica Clifford photo)

After a disappointing 2018, Whitefield’s annual Fourth of July parade and fundraiser saw a considerable uptick in floats and visitors.

The day’s events started with the parade, consisting of many more original floats, antique cars, walking groups, and the occasional tractor.

“We were all very hopeful that people would come back, and I think it was successful,” Dolly Burns, a member of the Whitefield Fourth of July Committee, said.

Burns said it is important to have a good parade in Whitefield because it attracts not only Whitefield residents, but also residents of surrounding towns without their own Fourth of July events.

The Whitefield Board of Selectmen formed the committee after last year’s parade in an effort to boost the number of parade participants and visitors.

According to Burns, the committee met once a month for three months, starting in April, “to get the parade back on track,” partly through better publicity.

Burns believes the committee accomplished its goal and does not need to continue meeting. Committee Chair Sue McKeen agrees. “People have come back. They have come back in force, as they usually do here in this town,” Sue McKeen said.

“I’ve been told it’s quite a record turnout,” she added.

Last year’s parade had new safety guidelines that contributed to the sharp decline in participation. Some of those guidelines included filling out forms and showing proof of insurance.

This year only had one guideline – only walking participants were allowed to throw candy. The selectmen voted on this requirement April 16.

“I think it was better attended this year and I relate that to the good publicity,” Whitefield Selectman Bill McKeen said. The parade never received as much publicity in the past, he said, but “just kind of happened automatically.”

In addition to bringing back less restrictive parade guidelines, all parade participants were part of a contest with various categories.

Best Overall Float went to an entry dedicated to the viewing of the 1969 moon landing. On the float, a boy in an astronaut costume stood inside a handmade television, while two other children dressed for the time period looked toward him.

The judges for the contest included Burns, David Hayden, and Debbie Rogers.

Other contest categories included Best Farm Float, Most Outrageous, Most Thrown Together, Most Patriotic, Best Design by Children, and Best Political Participants.

In addition to the floats, fire trucks from Whitefield, Pittston, Randolph, and Somerville blared their sirens and flashed their lights.

A cruiser from the Lincoln County Sheriff’s Office started the parade, while the agency’s color guard followed.

“I counted seven floats or marching units, not counting any of the vehicles, which is six more than last year. Last year we only had one float,” Bill McKeen said.

After the parade, people made their way to the Kings Mills firehouse for its annual fundraiser.

Members of the Kings Mills Volunteer Fire Association sold french fries and hot dogs, while a silent and live auction, known as the fireman’s auction, was taking place close by.

Although the figures are not in yet, Jeff Newell, president of the Kings Mills Volunteer Fire Association, believes the event raised over $6,000.

“Everything that we make, 100% goes back into fire service. It may not be direct; it might be in the way of upkeep on our building or supplies for the Fourth of July to raise money,” Newell said.

The Kings Mills Union Hall hosted its annual white elephant sale, also known as a yard sale, in the hall across from the firehouse on Townhouse Road.

At the same time, children enjoyed a dunk tank and bouncy house put on by the Sheepscot Valley Community Church, Newell said.

A long line was waiting to play the cake walk, “a favorite amongst the crowd,” Burns said.

The game entails people standing in a circle, with each person standing by a number. When the music plays, people walk in a circle and stop when the music is turned off. A number is selected and whoever is standing at that number wins a free cake.

Mizner decided to make the painting when he was looking through old photographs and stumbled upon a photograph of the Whitefield Fourth of July parade. He used three years of photos of people waiting for the parade as reference pieces for his painting.

Regular paradegoers found themselves in his artwork and took photographs next to the large canvas.

In the background, the local folk and blues band Well Seasoned played.