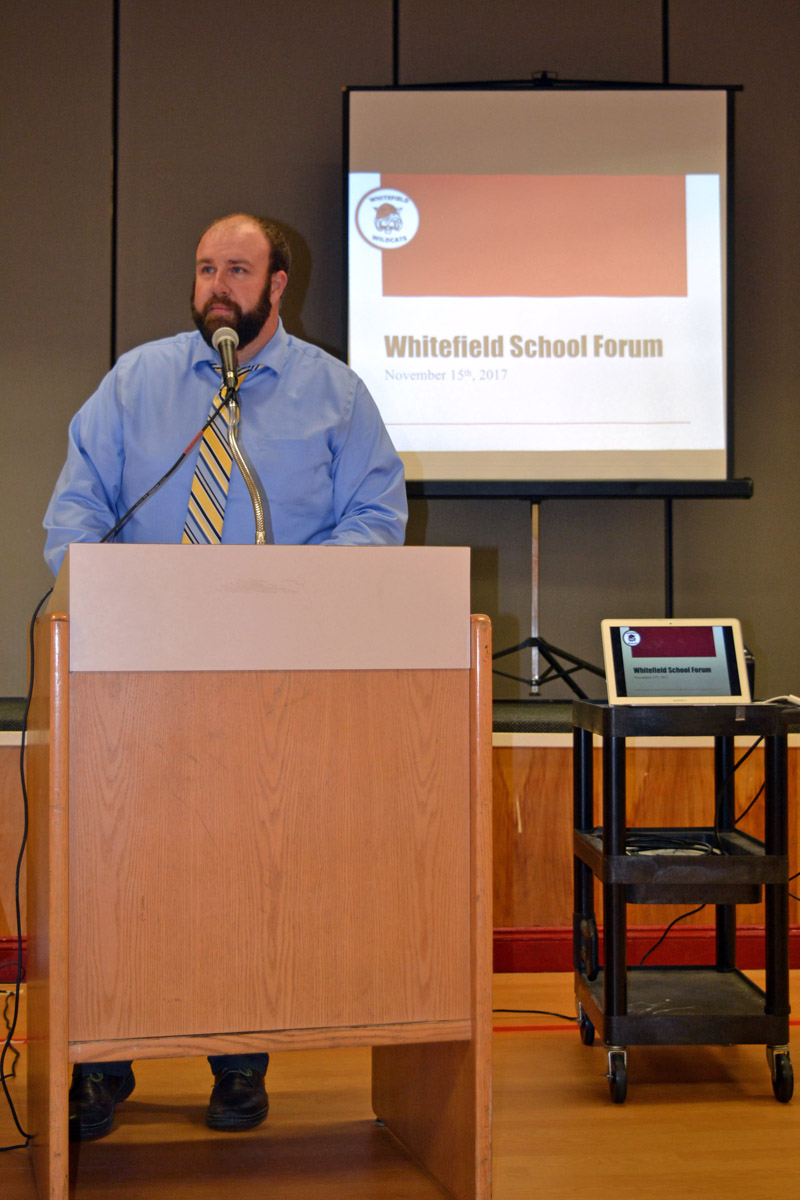 Parents expressed a mix of concern about the current state of Whitefield Elementary School, including for students’ safety, and hope for the school’s future during a public forum in the school gym Wednesday, Nov. 15.

Approximately 80 people turned out for the forum. Parents of current students joined parents of former students, community members, school staff, and members of the Sheepscot Valley Regional School Unit Board of Directors for what was billed as “an opportunity to share personal experiences, constructive ideas, or talents they can contribute to the school.”

Moderator Dick Thompson, who also moderates RSU 12’s budget meetings, welcomed guests, emphasizing that the goals of the evening were “to create a positive but honest conversation between the school leadership and the town,” to come up with “clear priorities” from residents for the school’s future, and to establish “a commitment to work together to achieve our goals.”

The evening would follow a “World Cafe format,” Thompson said, in which participants, seated at round tables, would participate in a 20-minute period of discussion and brainstorming before moving to another table to do the same with a new group.

Three rounds were scheduled for the evening: one on the school’s present, one on its past, and one on its future and what changes should be made “to make Whitefield school the best it can be.” Fish bowls were available on each table for those who wished to make private comments on slips of paper to be read by school officials at a later time.

McNaughton focused on improvements to the school in recent years, such as those made to the playground and the “building envelope,” including insulation, new windows and doors, and an ongoing siding project, as well as increased security, as the school is now a “lockdown-capable” facility. He also praised the school’s improvement in the areas of academics and social skills.

McNaughton said he would “really like feedback on communication” from the school to the home and the community. He said the school employs a number of methods – paper correspondence, Facebook, flyers, emails, and phone calls – to communicate about goings-on at the school.

Marple, when it was his turn, said, “Some of you have had experiences in this school that I’m not proud of. I am personally sorry.” It’s important for students to feel safe and welcome, he said.

“What we’d like to see Whitefield become is a place to find what (a) kid wants to do, what he is good at,” Marple said. “We want Whitefield to be a place where every kid has that opportunity.”

Tuttle asked participants to use large, white “chart papers” at each table to write down ideas about what is working at the school and ideas for improvement. 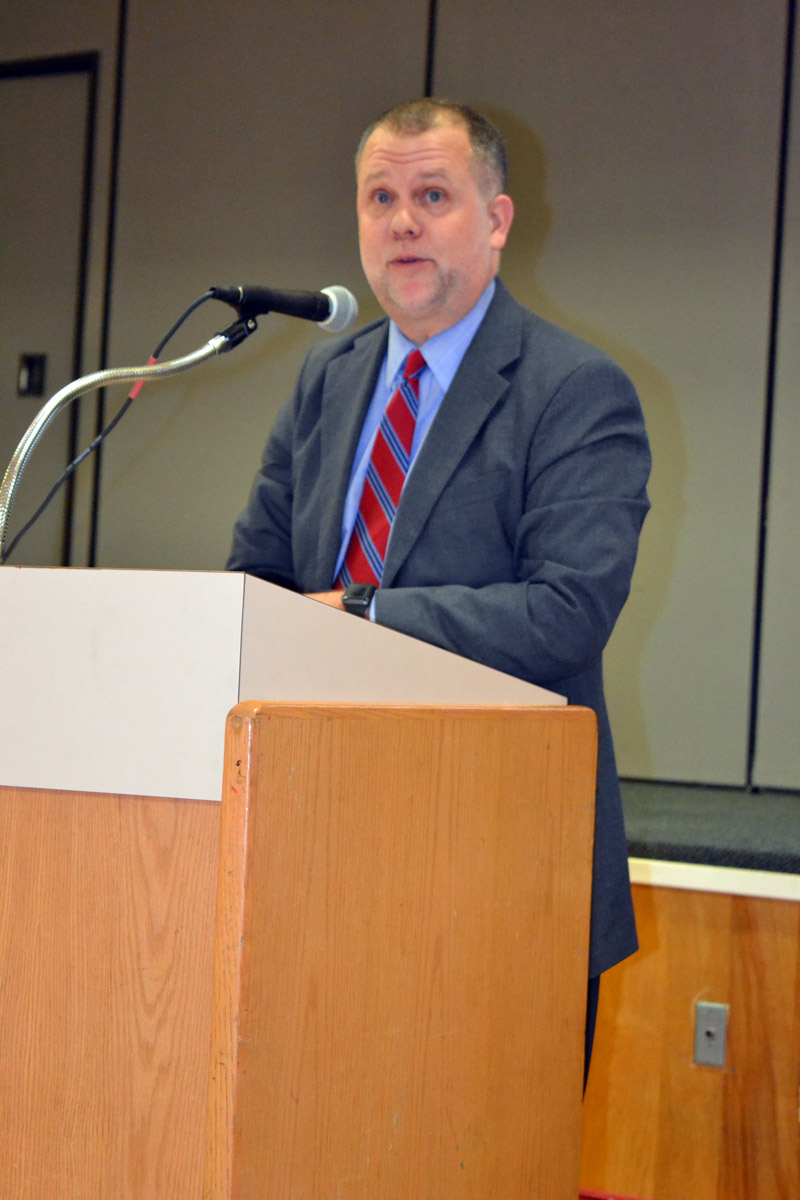 It was “most important,” Tuttle said, to generate ideas “so we can move toward improvements at the school.”

The chart papers would end up taped to the gym walls and participants would vote for their favorite ideas with little colored stickers at the end of the event.

Shortly after Tuttle finished speaking, a man in the audience stood up. “This is offensive,” he said. “How many have pulled their kids out of Whitefield because they did not feel safe?” Applause followed his remarks.

The man, joined by several others who stood up, said he and those who came with him had prepared speeches for the event.

After Marple acknowledged the difficult task of balancing self-expression with a constructive outcome to the evening, Tuttle said there would be a regrouping at the end of the event in case anyone still wished to speak after they had a chance to communicate in groups.

At the table discussions, conversation ran the gamut, from lamenting the lack of penmanship classes and school clubs, such as drama, computer, photography, and Minecraft clubs, to the dwindling number of PTA members to the safety of students at the school, the latter a theme that would be repeated throughout the evening.

Shannon Peaslee, a parent and PTA member seated at a table discussing the current state of the school, said only two members showed up at the previous night’s PTA meeting. “Through the years, we’ve lost everybody. Now we’re down to two members,” said Peaslee, whose sixth-grade son has attended the school since kindergarten.

Peaslee also expressed dismay that the school has “gone through a lot of art teachers. There’s no consistency.”

Lynnette Conroy, mother of fourth-grader Quinn Conroy, was blunt about the school’s website, saying it “kind of sucks.” She said she believes Whitefield students could do “as good a job” on developing and maintaining the site and get web-design experience while they’re at it.

On the plus side, Conroy said she is proud that there is “no elitism” at Whitefield Elementary. “A class system within the school environment – that’s not a good way to grow up,” she said.

One participant said she thinks the food at the school should be healthier and the school should consider having a school garden in which to grow fresh vegetables. Another person said she does not think there is enough supervision during cafeteria time to ensure students eat their lunch.

At one table, during a discussion of the school’s past, a woman said she had pulled her son out of the school due to “a safety issue.”

She later elaborated, saying her son, then a kindergartner, was “sexually assaulted” by a 6-year-old. She said the only consequence for her son’s alleged attacker was a three-day bus suspension. Her son, she said, had to continue riding the same bus as the other boy after his suspension.

A man at the table, a single parent of a third-grader, reported a positive experience with the school. “So far, our experience here has been great. Absolutely great!” he said. “I’m shocked when I hear some of the horror stories.”

At a table discussing the future of the school, Taryn Marcus, co-owner of Sheepscot General in Whitefield, brought up the subject of bringing in talented community volunteers into the school. There was consensus at her table that there is a wealth of potential volunteers in Whitefield who do not necessarily have children in school and could help ease the burden on “overstressed, overworked” parents, who could then give time to such things as the PTA. 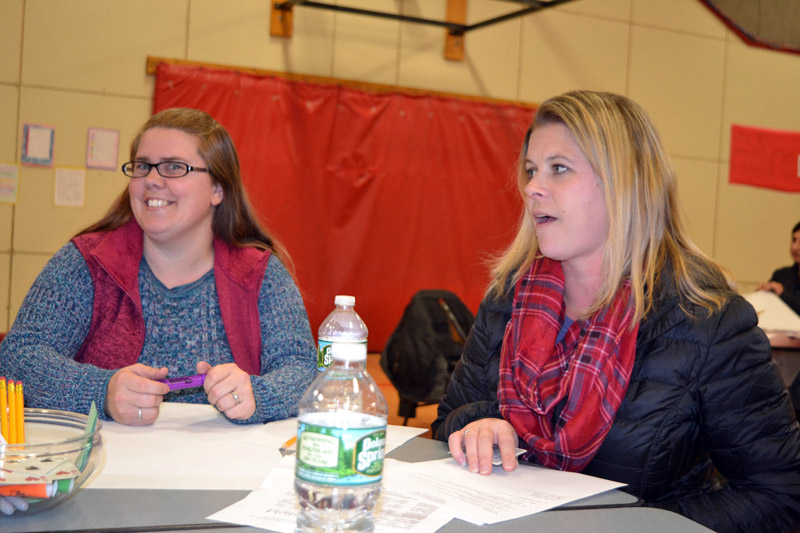 “I’ve been disturbed about the lack of welcoming of volunteers (at the school),” said former Whitefield Selectman Sue McKeen. “There hasn’t been an effort to bring us in. There is a ton of well-educated retired people who will come to volunteer here. We need a volunteer coordinator.”

By the end of the night, it was clear that the forum’s attendees saw a need for change at Whitefield Elementary.

Marple, in an email response to follow-up questions after the forum, said the top priorities that emerged were “1) (the need for increased) transparency and follow-through, 2) improving the safety of our students, and 3) review and improvement of our hiring practices.”

These concerns, he said, “were echoed by a story shared by a parent that night, of a sexual assault of a kindergartner on one of our school buses, and how she felt our school had failed to protect her child or provide a response that reflected the seriousness of the situation … We cannot undo what is done, but we can and will do whatever is necessary to protect every child in our school.”

Tuttle, in an email response to a request for comment, thanked everyone who participated in the forum. 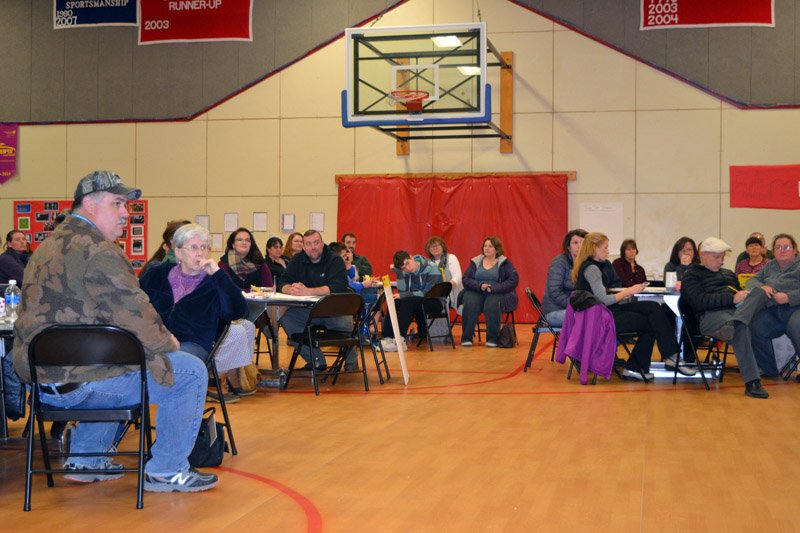 “Eighty-one townspeople from multiple generations joined us to discuss their ideas and we were amazed at the quality of the thoughts shared with us,” Tuttle said.

“We were provided over 200 excellent ideas on what we could or should do, and we were given very clear priorities on our next steps,” he said. “The thoughts shared with us that night were absolute gold and are being treated as such. The ideas represent our road map to the future.

“We will be establishing a school-based advisory committee in the next few weeks composed of parents, stakeholders, and educators to initiate the improvements that were brainstormed. We will be transparent about the process and keep the public regularly informed.”

McNaughton did not respond to a request for comment.