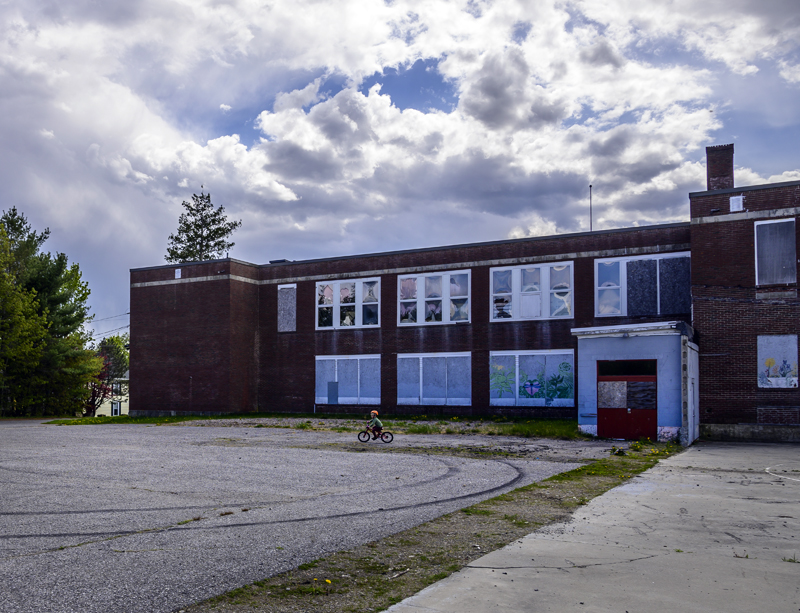 A child rides his bike in the parking lot of the A.D. Gray building in Waldoboro on Friday, May 14. Members of the A.D. Gray Park Coalition say a park would benefit families in the community. (Bisi Cameron Yee photo)

Representatives of the A.D. Gray Park Coalition and Volunteers of America presented their separate visions for the future of the A.D. Gray property during a forum in Waldoboro on Thursday, May 13.

The June 8 annual town meeting by referendum will determine whether voters favor a park or affordable senior housing on the site.

The 18,764-square-foot building on the site was built as Waldoboro High School in 1935. According to Waldoborough Historical Society President Jean Lawrence, when Waldoboro joined the MSAD 40 district in the 1960s, a larger high school was needed.

After Medomak Valley High School was built in 1968, Waldoboro High School became the A.D. Gray School. Lawrence said it was named after a visionary superintendent, Alvra D. Gray, who served from 1937-1945.

When Medomak Middle School was built adjacent to MVHS in 2008, A.D. Gray School was no longer needed. The building has been vacant since 2009.

Surran Pyne and Vikki Bell, both of Waldoboro, spoke first on behalf of the A.D. Gray Park Coalition. Members of the coalition’s board include Pyne, Bell, Gerry Hungerford, Glenn Barbour, Jeanette Wheeler, and Susan Szwed.

Pyne said the coalition gathered 350 signatures from registered voters to get the park question on the ballot, has received pledges of $180,000 toward the project, has gathered cost estimates, and has had a concept plan drawn up.

Multiple residents asked whether the two proposals could coexist.

Bell gave three reasons why they could not: parking, limits on the scope of what the park could be, and the desire of many residents to retain town ownership of the property.

In response to a question from George Seaver, Pyne said the concept plan is for the whole property, including a ballfield and tennis courts, but the specifics of the plan are not final. Pyne said that the tennis courts were built on state- and town-designated wetlands, which will need to be addressed.

Resident Laura Buxbaum, a member of the MaineHousing Board of Commissioners, asked about fundraising plans for demolition of the building and both development and maintenance of the park.

According to Pyne, the existing pledges, in addition to a possible dollar-for-dollar match from the Land and Water Conservation Fund, would be “more than enough” to cover estimates to demolish the building and remove the tennis courts, then fill, loam, and seed the area. Pyne said demolition has been estimated to cost $253,000, but the coalition is planning on $325,000 in case the cost goes up.

Pyne said the pledges are from proven donors who have been generous in their support of many local charitable endeavors.

Resident Seth Hall asked if the coalition would be willing to compromise and find another use for the building. Pyne said donor pledges “only apply to the project as it’s been outlined” as an 8-acre park.

Resident Jen Merritt asked if the coalition had given thought to residents who might want to stay in Waldoboro as they age.

Bell said there is no guarantee that any residents would get into the proposed housing and there are other options in town, such as the Sproul Block Apartments.

Pyne said that location would make sense and it would also be less expensive for Volunteers of America to build new than to renovate.

Pyne said she expects that responsibility for basic maintenance, security, and liability would stay with the town. Park amenities would be determined in a second phase, and could be funded by grants or by fees associated with events at the location.

Bell said upkeep of the park could also be covered by income generated from fees, as well as volunteer labor and future donations.

“We don’t have a village green — that’s what this would be for us,” Pyne said.

Volunteers of America is the largest nonprofit provider of affordable housing in the United States. The Northern New England Division manages 11 housing locations in Maine.

According to Sites, Volunteers of America offers a complete package, from development to management to operations. The organization is focused on aging in place and keeping residents as independent as possible.

Drake said that seniors with incomes from $25,000 to $35,000 are the target population, and the multiple funding avenues they will seek for the project have age and income requirements. Drake said the average age across their properties is 78-79 and the average stay is five to seven years.

Sites said that contracts with funding sources are generally written for 40-45 years and that Volunteers of America would operate the building for as long as possible. “As an organization, our plan is never to sell. We preserve every single unit we can, because they are super valuable,” he said.

Drake said that if funding is partially subsidized, residents would pay 30% of their adjusted gross income, and if it is not subsidized, the maximum rent would be around $600.

Volunteers of America would just own the 1.1 acres that include the building, the immediate grounds, and the parking area — they would not own the ballfield or tennis courts.

Sites said the organization would use the existing two-story building and add a taller three-story wing to the back. The final structure would be 31,074 square feet with 32 one-bedroom units of approximately 600 square feet each and 34 parking spaces.

Sites said that 23 out of 31 residents at their Thomaston building came from within a 10-mile radius of the building.

Asked about increased construction costs, Sites said the original proposal for 25 units was expected to cost $6.2 million to $6.4 million and their funding cap is $8.6 million. Sites said Volunteers of America will not ask the town for any money.

Sites said the purchase of the building would have to occur before they can start pre-development work, including securing funding. Volunteers of America would move on construction once funding is in place, which could be in early 2022. Sites estimated that it might take two years from breaking ground to leasing units.

Sites said the specifics and amounts of a payment bond to protect the town if the project falls through, as well as any payments in lieu of taxes, would be finalized in an option agreement once it has been determined that the town wants to move forward. “Zero taxes was never our proposal,” he said.

Hall asked if there might be creative ways to give Waldoboro residents a better chance to secure a unit.

“We have to follow federal guidelines,” Sites said. “If you income-qualify, the units are made available.”

“We can do everything possible to market and promote as early and as often as possible,” Sites said, which would give Waldoboro residents a head start on applying.

Sites said he loves the idea of coexisting with a park that would also benefit the building’s residents, but no one has broached the topic with them.

“There’s a lot to be said for adaptive reuse,” Sites said. “It’s a great community and a great project.”

Links to a video of the forum and the Volunteers of America memorandum of understanding are available at tinyurl.com/rbymd8fk.