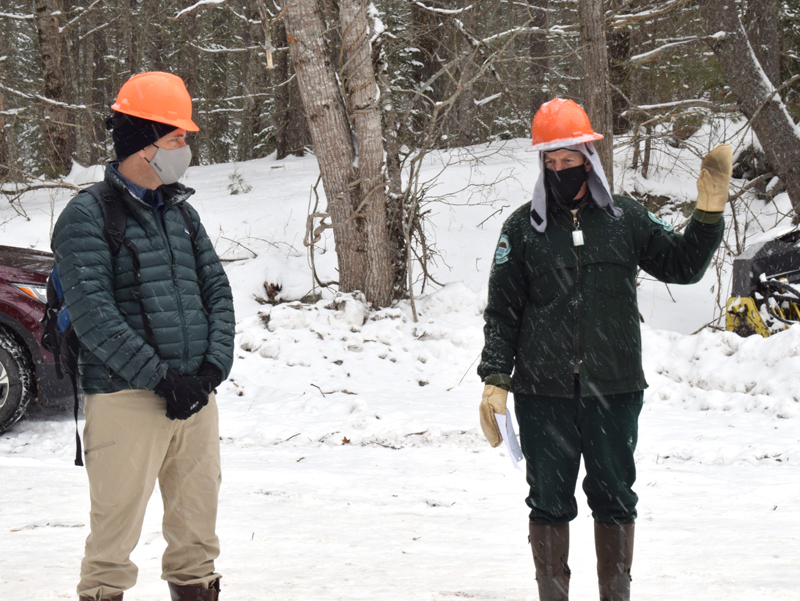 The parking area and all trails at Dodge Point Public Reserved Land, in Newcastle, on the east side of River Road will be closed for approximately three to six weeks to complete the state’s timber harvest.

The Maine Bureau of Parks and Lands is managing the harvest. According to the bureau, “closings are for public safety and in response to ongoing disregard by some visitors for posted safety measures.”

Originally, the bureau intended to close off only select trails and use signage to direct recreational users away from the timber harvest operation. However, apparent disregard for the signage led the state agency to close the entire preserve on the east side of River Road where the harvest is taking place, Bill Patterson, deputy director of the bureau, said during a tour of the operation on Tuesday, Feb. 9. 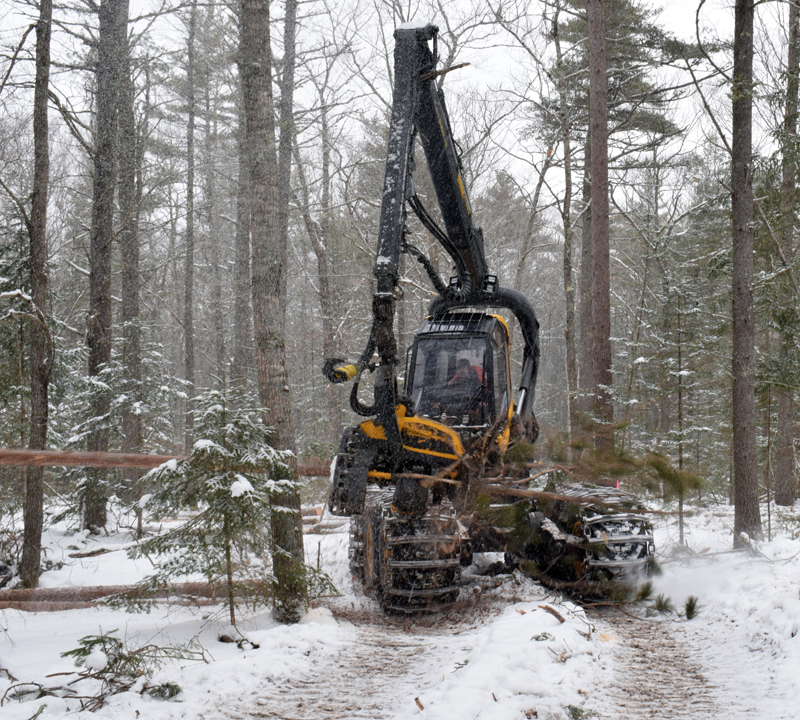 A processor harvests a tree at Dodge Point Public Reserved Land in Newcastle Tuesday, Feb. 10 as part of the ongoing timber harvest there. The parking lot and all trails on the east side of River Road will be closed for three to six weeks for the timber harvest. (Evan Houk photo)

Patterson said a Dodge Point trailhead on the opposite side of River Road can still be used. The River-Link Trail can be accessed there as well.

A timber harvest was completed on the west side of River Road last winter.

Stephen Richardson, senior forest engineer with the Maine Bureau of Parks and Lands, led the tour for about 20 people, during which he explained the selective harvesting methods of the state. Other state employees, Coastal Rivers Conservation Trust employees and volunteers, abutters, and Dodge Point users attended the tour.

Richardson said the last timber harvest was in the early 2000s and that the bureau has to harvest trees to protect diversity in the vast forest of Dodge Point and to fund the state bureau.

A machine loads harvested wood onto a truck at Dodge Point Public Reserved Land in Newcastle during a tour of the operation Tuesday, Feb. 10. The parking lot and all trails on the east side of River Road will be closed for three to six weeks to complete the harvest. (Evan Houk photo)

The bureau receives no tax dollars for its work. The majority of its funding comes from forest management, Richardson said.

The bureau owns and manages Dodge Point, while Coastal Rivers Conservation Trust donors and volunteers assist with upkeep. The 500-plus-acre property has an extensive trail system and more than 1 1/2 miles of frontage along the Damariscotta River.

Richardson said that areas are not cleared during harvesting, but trees are carefully selected for forest management purposes.

“We’re trying to make some improvements in the forest by removing low-quality stems, leaving higher quality trees, and trying to regenerate the higher quality species to improve the stand for future for the people of the state of Maine,” Richardson said in a YouTube video about the timber harvest.

According to the Society of American Foresters, a stand is “an aggregation of trees or other growth occupying a specific area and sufficiently uniform in species composition, size, age, arrangement, and condition as to be distinguished from the forest or other growth on adjoining areas.” 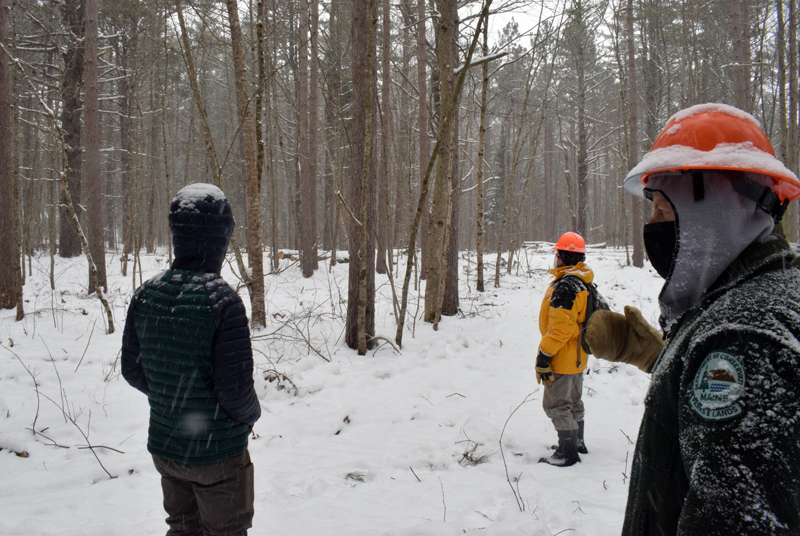 Stephen Richardson, senior forest engineer with the Maine Bureau of Parks and Lands (right), points out an area of forest at Dodge Point Public Reserved Land in Newcastle that has been selectively timber harvested during a tour of the operation on Tuesday, Feb 10. (Evan Houk photo)

During the tour, Richardson said the Boston-based Sappi North America will purchase the approximately 2,000 cords of wood that is expected to be harvested from the 250 acres where cutting is taking place.

He said approximately 1,200-1,300 cords of wood were harvested from 125 acres of woods on the west side of River Road last year, which works out to about 10 cords per acre being harvested.

Some of the trees will be used to make paper and others will be cut specifically for use as utility poles, Richardson said.

Jim Britt, of the Maine Department of Agriculture, Conservation and Forestry, said the harvest will net the bureau approximately $25,000, after it covers logging expenses as well as improvements to the preserve.

Steven Hufnagel, executive director of Coastal Rivers Conservation Trust, said the property has been an award-winning tree farm and has been harvested since the early 20th century, when the Freeman family owned the property.

Hufnagel said the Freeman family, who also owned Round Top Farm in Damariscotta where Coastal Rivers is headquartered, gave their farm workers a place to work in the winter harvesting timber on the land that is now Dodge Point Public Reserved Land. 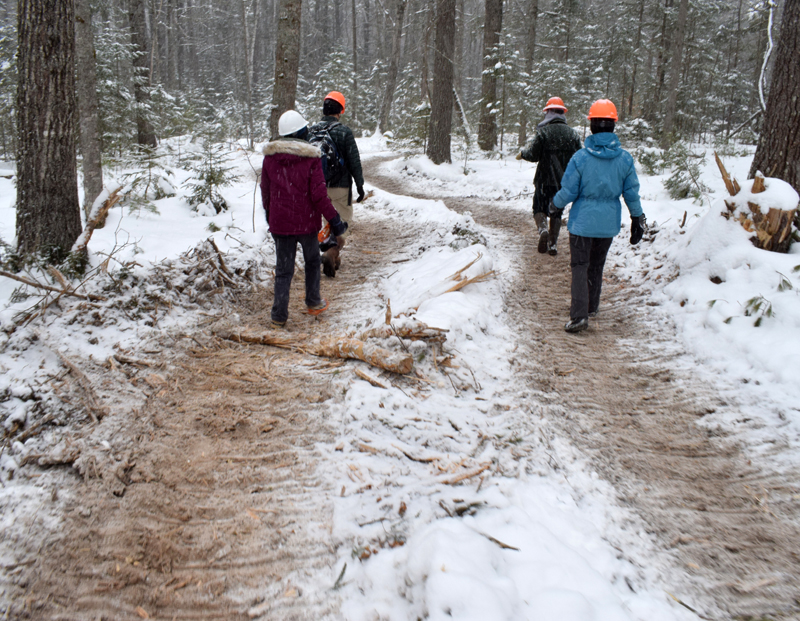 Hufnagel said the land management plan for Dodge Point is reviewed with the public every 10-15 years. Another review of the plan is due but has not been scheduled yet, Richardson said.

Bryan Manahan, a neighbor and trail user, asked several questions during the tour about the amount of wood that would be harvested and how the public lands would be protected from damage and erosion during the harvest.

Manahan also expressed concerns voiced by users of the Dodge Point trails who worry the timber harvest will spoil the public lands and the forest.

Richardson assured him there would be no “tree clearings” and the harvest only involves selective cutting. He also said that if necessary, repairs would be made to the logging roads to prevent erosion.