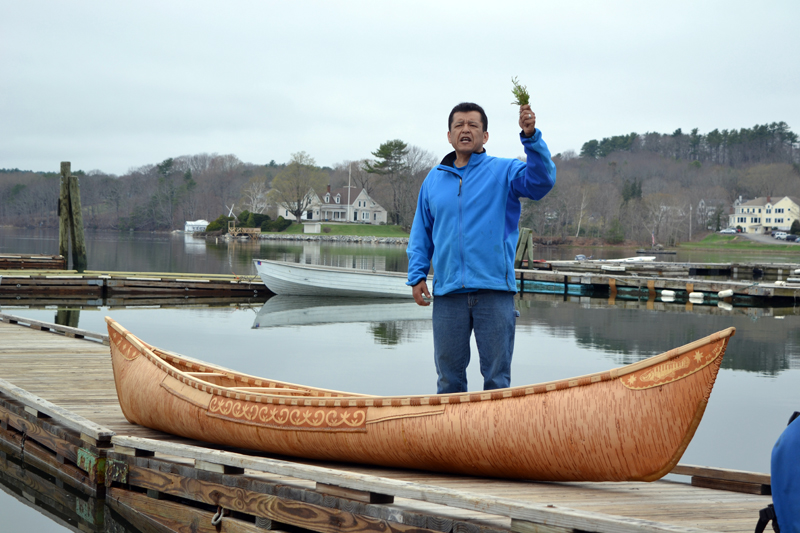 Passamaquoddy elder Dwayne Tomah gives a blessing in both Passamaquoddy and English before the boat is launched into the Damariscotta River for its first ride. (Christine LaPado-Breglia photo)

By 1 p.m. on Thursday, April 27, a small crowd had gathered near the flagpole at Lincoln Academy in Newcastle. The occasion was the celebration of the recent completion of a Wabanaki birchbark canoe in the school’s Cable-Burns Applied Technology and Engineering Center, a project that was led by Wellington master canoe-builder Steve Cayard.

On this day, Cayard and a number of others – including the LA students involved in helping build the 14-foot canoe – accompanied the beautiful brown boat as it was carried along in a procession down Academy Hill Road that ended at the Damariscotta town landing for a launching ceremony marking the canoe’s maiden voyage.

Beginning in late March, Cayard, boat-building interns Dan Asher and Tobias Francis, and students at LA worked together for four weeks to create the traditional birchbark canoe – shaping the bark, bending the canoe’s ribs, splitting and lashing spruce roots, and so on. The result is a meticulously crafted, artfully detailed, lightweight canoe that is authentic in every way. Originally, Passamaquoddy master canoe-builder David Moses Bridges – a longtime friend and colleague of Cayard’s – was scheduled to work on the building of the boat, but he passed away from cancer in January at age 54. Francis is his son.

At the Damariscotta town landing, Damariscotta River Association Education Director Sarah Gladu spoke to the crowd assembled along the river’s edge. The DRA, with the support of anonymous funders, partnered with Lincoln Academy to bring the canoe-building project to life. LincolnHealth provided housing for Cayard while he was working on the boat.

Gladu pointed out that the boat has Bridges’ native name – “Tepit” – etched into it. Bridges, she noted, worked with the DRA for nine years. 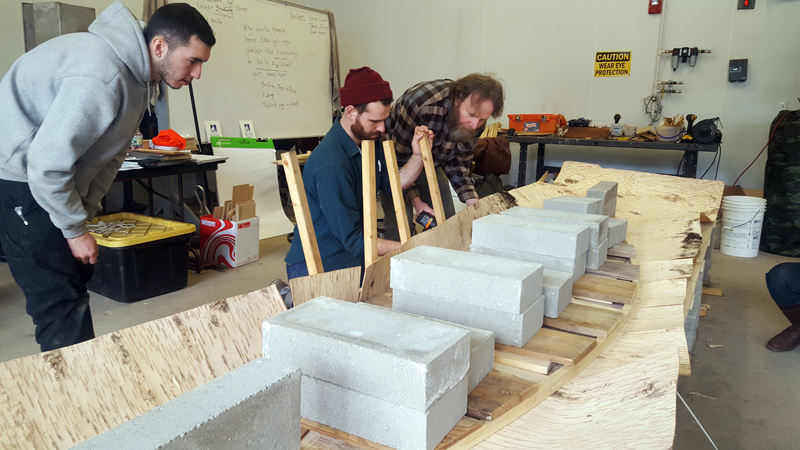 “It feels good to bring it here,” said Cayard of the canoe, after talking briefly about the native tradition of paddling canoes on the ocean. “It’s a beautiful day on this water. I think we’re lucky.”

Francis’ brief comments were touching. “I have lost the ability to pick (boat-building) up straight from my father,” he said, “but it was huge to work with Steve.”

“I am glad to see (the boat) here. I know he can see it as well,” Francis said, referring to his late father.

Passamaquoddy elder Dwayne Tomah performed a blessing ceremony over the canoe in both the Passamaquoddy language and in English before Gladu and Cayard hopped in and took the 51-pound canoe for its first ride.

As the canoe glided back toward shore, Gladu called out that Cayard had told her the boat “moves like thought” – in other words, quietly and effortlessly.

Cayard talked about how he began building traditional canoes in a phone interview after the launching ceremony. “There hadn’t been any builders of the traditional canoes since about 1920 in the Wabanaki community. They maintained a strong oral tradition of canoes, but the actual practice of building them basically was left to dormancy,” he said.

Cayard said he approached Barry Dana, then chief of the Penobscot Nation, to lead a traditional canoe-building workshop in 2002. Other workshops soon followed. Cayard has since become a widely respected master in his field, notably among the Wabanaki tribes of Maine and New Brunswick – the Passamaquoddy, Penobscot, and Maliseet.

“I enjoyed it,” Cayard said of his first experience of building a canoe in a school setting. “I thought it was really a good experience for the students.”

“I would suggest that the maritime history of this area goes back thousands of years with birchbark canoes as the primary means of transportation. What we tried to do is bring back a little bit of history to life, to the modern world,” said Cayard. 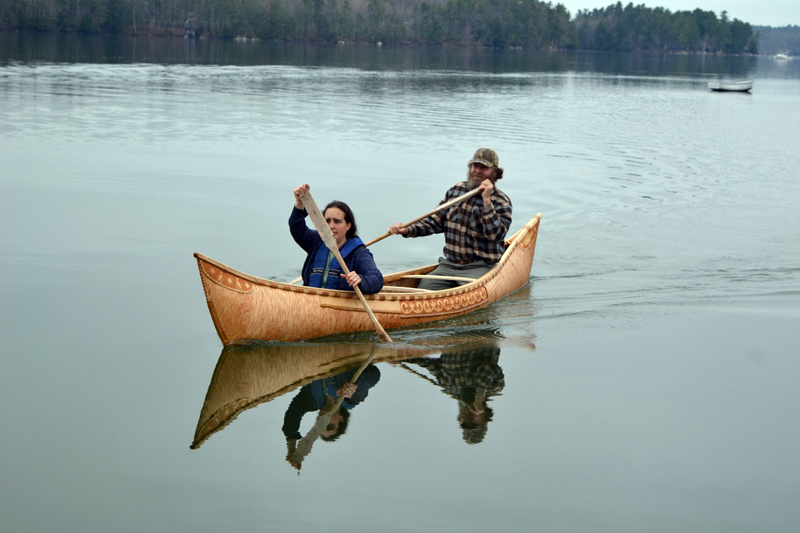 Sarah Gladu and Steve Cayard return to shore on the maiden voyage of the traditional Wabanaki canoe built by Cayard and others in Lincoln Academy’s Cable-Burns Applied Technology and Engineering Center. (Christine LaPado-Breglia photo)

Cayard was keen to emphasize that the canoe “was dedicated to David Moses Bridges, who made such an impact on this community over the years to bring awareness of native culture to those who might not have been exposed otherwise.”

“It was really great to have Tobias there,” Cayard said, adding that the canoe-building project “was important to Tobias to come to terms with the loss of his father and what his father meant to him.”

Gladu spoke to the significance of Bridges’ work in the local community in her comments after the ceremony. “For nine years, I worked with Passamaquoddy master traditional canoe-builder David Moses Bridges to bring local, native, traditional knowledge of the landscape, demonstrate through hands-on experiences how humans have been connected to it for thousands of years, and bring understanding of another culture to this community, and specifically its youth,” she said.

“We never built a boat together but rather focused on other Wabanaki skills, like etching birchbark and building wigwams and reading the landscape,” Gladu said. “We did plan to hold our first Wabanaki traditional canoe-building program last fall. However, in the meantime, David got too sick with sinus cancer. He died over the winter and is greatly missed.”

Gladu said that Bridges connected her with Cayard in April of last year, “even as his health was failing … knowing DRA wanted to continue connecting people to this landscape and that I would be offering the educational programs.”

Gladu said that the new birchbark canoe now belongs to the DRA “and we will use it for educational purposes. It will be put in the water from time to time so people can experience this technology as it was intended to be used.”

Go to stevecayard.com to learn more about Cayard’s work and to see photographs of the traditional birchbark canoes he has built.