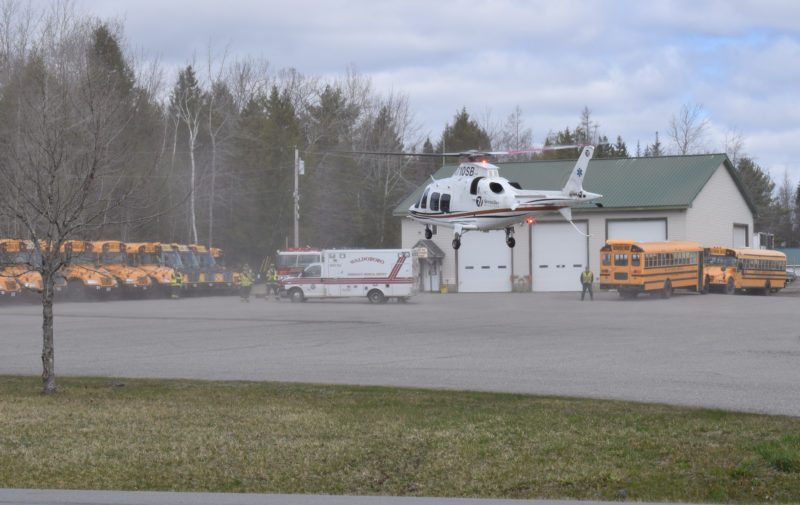 A LifeFlight helicopter lands in the parking lot of the RSU 40 bus garage in Waldoboro on Sunday, April 18. Deborah Leavitt, of Union, was LifeFlighted to Central Maine Medical Center in Lewiston after a crash on Route 1. (Evan Houk photo)

A woman was LifeFlighted to Central Maine Medical Center in Lewiston after a crash on Route 1 in Waldoboro on Sunday, April 18.

James W. Leavitt, 65, of Union, was driving a Ford F-150 truck out of the parking lot at the RSU 40 bus garage when he drove straight across Route 1 into the ditch, according to Waldoboro Police Officer Jeff Fuller. Deborah Leavitt, 63, also of Union, was also in the vehicle.

Leavitt told Fuller he was eating, began choking, and the next thing he knew he was in the ditch. Fuller said Leavitt may have accidentally hit the accelerator.

“It looks like he had a medical event that caused him to cross the road,” Fuller said.

Both Deborah Leavitt and James Leavitt were wearing seatbelts when the crash occurred and the airbags in the vehicle deployed, Fuller said. The truck sustained significant front-end damage.

Traffic was slowed down on Route 1 for a little over an hour for the cleanup of the scene. The road was completely closed for about 20 minutes while Hillside Collision Center towed the truck out of the ditch. 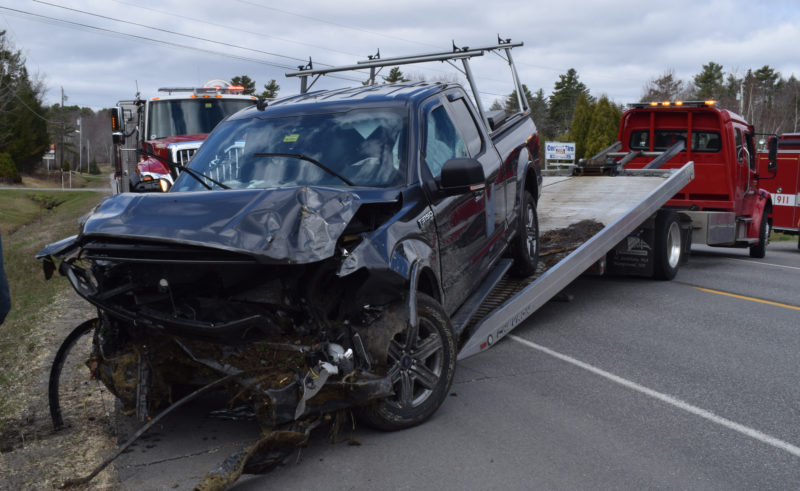 Hillside Collision Center tows a 2020 Ford F-150 out of a ditch on the side of Route 1 in Waldoboro on Sunday, April 18. The driver told police that he started choking on food while exiting the RSU 40 bus garage across the street and wound up in the ditch. (Evan Houk photo)