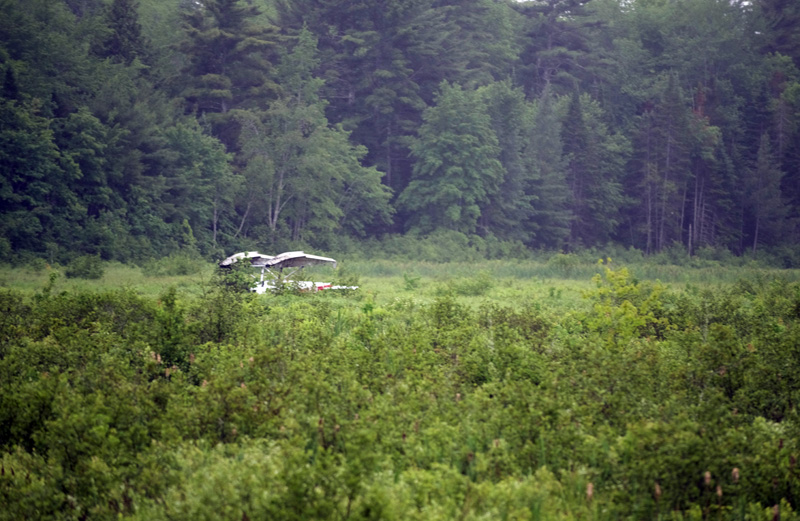 A plane is upside down in a swamp near Woodchuck Way in Jefferson the evening of Saturday, June 23. The two occupants were unhurt, according to Jefferson Fire Chief Walter Morris. (Jessica Picard photo)

A small plane crash-landed in a swamp near Woodchuck Way in Jefferson the evening of Saturday, June 23, but the pilot and his passenger escaped injury.

According to Jefferson Fire Chief Walter Morris, the occupants exited the plane and walked out of the swamp under their own power.

The Lincoln County Communications Center dispatched Jefferson Fire and Rescue at 5:26 p.m. for a report of a pontoon-style plane down in the swamp.

A passerby saw the plane crash and walked into the swamp to check on the occupants, Morris said. The plane came to rest on its roof.

When Jefferson Fire and Rescue arrived, three firefighters went into the swamp “to get to the victims as quickly as possible,” Morris said. “Another crew was then sent in with a Stokes basket, but fortunately it was not needed.”

Morris estimated that the plane landed a quarter mile from the roadway, in a “very swampy and marshy area” where “you could step and go down to your knees or waist.”

Joe Holland, owner of the ice cream shop Jefferson Scoop, used a drone to give firefighters an aerial view of the scene.

“The drone was extremely valuable. It gave us a good view of the scene and allowed us to keep tabs on firefighters and rescue personnel as they made their way to and back from the crash. It was very helpful,” Morris said.

The airplane’s passengers were evaluated on scene, but neither were taken to a hospital, Morris said.

Firefighters could smell fuel at the crash site, Morris said.

“I advised (the Maine Department of Environmental Protection) of the situation and let them know it was well off the road in a swamp,” Morris said.

DEP spokesman David Madore said a DEP employee went to the scene of the plane crash Saturday evening and placed booms and pads around the plane as a precautionary measure.

However, Madore said, no fuel was found to have entered the water upon further investigation.

The Federal Aviation Administration and the National Transportation Safety Board were also contacted to investigate the crash, according to Morris.

The Lincoln County Sheriff’s Office and Waldoboro Emergency Medical Services responded to the scene, along with 19 members of Jefferson Fire and Rescue.

According to a statement from Arlene Salac, of the Federal Aviation Administration, the aircraft was a Cessna 185 Skywagon.

The FAA is investigating the incident and local officials will release the names of the pilot and the passenger, according to Salac.

According to the Federal Aviation Administration’s online registry, the plane is registered to Newcastle resident David Hewitt.

The plane was removed from the swamp the afternoon of Sunday, June 24, according to Morris.

Morris said the fire department was not involved in the plane’s removal, as the FAA and National Transportation Safety Board had advised that the plane should not be removed.

However, National Transportation Safety Board spokesman Keith Holloway said it was not mandatory for either agency to give permission for an aircraft’s removal and the plane’s owner or insurer could remove the craft to a secure location, such as a hangar, for the subsequent investigation.

“The FAA sent out an inspector and the aircraft was moved to a secure facility,” Holloway said.

The plane was removed by an excavating contractor, Jordan Excavation, of Kingfield, according to Morris.

Holloway said the FAA would conduct an initial investigation and provide the results to the NTSB, which could release a report and determine a cause of the crash.

Since the incident did not result in any injuries, the extent of damage will determine the next steps in the investigation.

“That will determine whether a formal investigation is conducted,” Holloway said.

The owner of the plane could not be reached for comment.