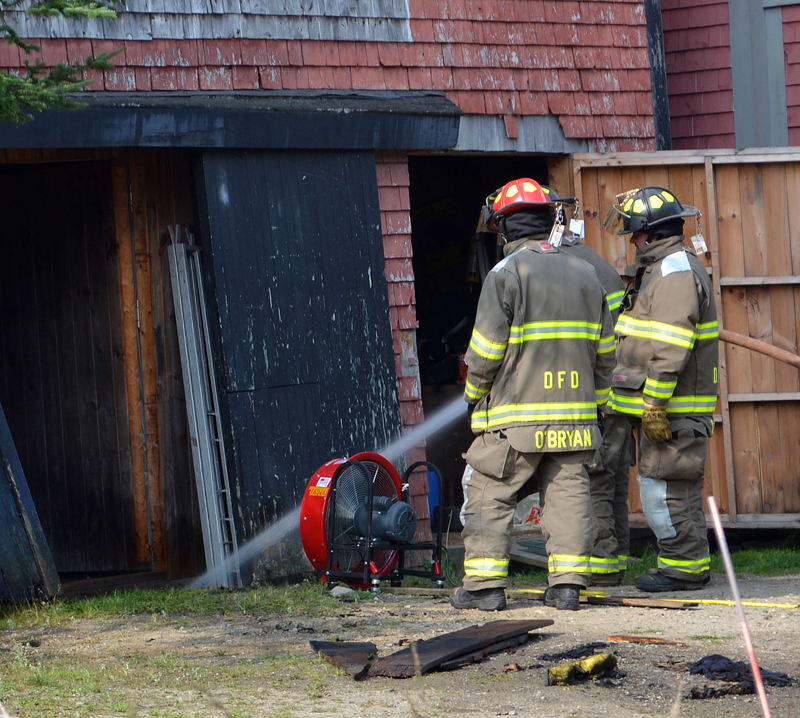 Damariscotta firefighters douse a hot spot in a barn at 23 Biscay Road in Damariscotta the morning of Thursday, Aug. 17. (Maia Zewert photo)

A passerby’s “quick and thoughtful response” likely prevented a fire from destroying a barn and house on Biscay Road the morning of Thursday, Aug. 17, according to Damariscotta Fire Chief John Roberts.

The passerby called the Lincoln County Communications Center just before 8:30 a.m. to report a fire in a barn at 23 Biscay Road, Roberts said. The caller then alerted the property owner, who was in the house next door, and the two deployed fire extinguishers before firefighters arrived.

“(The passerby) probably saved both buildings with their quick actions,” Roberts said.

The firefighters doused the hot spot with water to ensure the fire was fully extinguished and used a fan to clear smoke from the barn, Roberts said.

The fire was accidental, caused by the improper disposal of smoking materials, Roberts said. The Maine State Fire Marshal’s Office and Roberts concluded the investigation after an interview the evening of Sunday, Aug. 20.

The Bristol and Newcastle fire departments also responded to the scene.

“We had a very fast and good response for a call in the morning,” Roberts said.