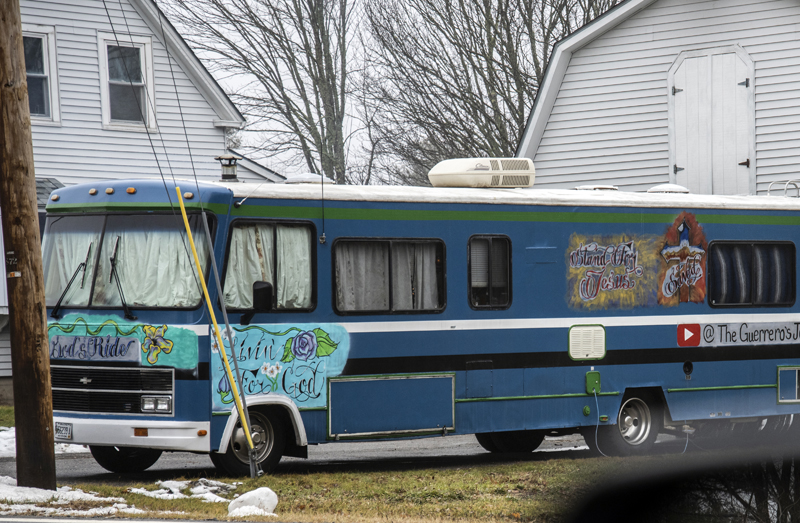 The Guerrero family’s bus is parked at a home in Waldoboro on Dec. 13. Joe L. Guerrero, 41, died when the vehicle fell on him while he was working on it Sunday, Jan. 3, police said. (Bisi Cameron Yee photo, LCN file)

A 41-year-old traveling pastor died when his bus-turned-camper fell off jack stands while he was working on the rear brakes in Waldoboro on Sunday, Jan. 3.

Joe L. Guerrero had died by the time officers arrived, according to Waldoboro Police Chief John Lash. He was found by the rear axle, pinned underneath the vehicle.

Lash said that a family member reported the incident at about 4 p.m. and that Joe Guerrero’s wife and two older children were present at the time.

Lash said the vehicle was most recently registered in Unity, but had been plugged in at 2507 Winslows Mills Road with permission from the property owner for about a month. He said the Guerrero family appeared to be staying on the property when not traveling in support of their evangelical ministry.

Joe Guerrero and wife Jennifer Guerrero were the founders and pastors of Truth Ministries, a traveling ministry dedicated to “spreading God’s gospel” through a variety of initiatives, including a YouTube channel.

According to the first episode of “The Guerrero’s Journey” on YouTube, Joe Guerrero was a Colorado tattoo artist who served time before becoming an evangelical pastor. Guerrero was pastor of the Second Baptist Church in Waterville from August 2019 to March 2020. There, he and his wife started a food bank and a clothing donation program and worked to restore a dwindling congregation.

Since then, the Guerrero family has used the brightly painted blue bus to travel to communities along Route 1 in Maine, creating videos for Truth Ministries and engaging in religious outreach.

Waldoboro EMS, fire, and police responded to the accident, along with Hillside Collision. Lash confirmed that the death was accidental.

The fire department is rallying the community to provide support for the Guerrero family, which has no family or friends in the area, according to a post by Fire Chief Paul Smeltzer on the department’s Facebook page.

The department hopes to provide the family with nonperishable food and gift cards to Hannaford Supermarket. If it receives cash donations, they will go toward finishing the brake repairs on the vehicle — “their home and transportation,” Smeltzer said.

“As they go through the grieving process, they will face many difficult decisions for their future, as they learn to cope without their husband and father,” Smeltzer said in the post. “We thank you again for your kindness as we come together for a family in our community.”