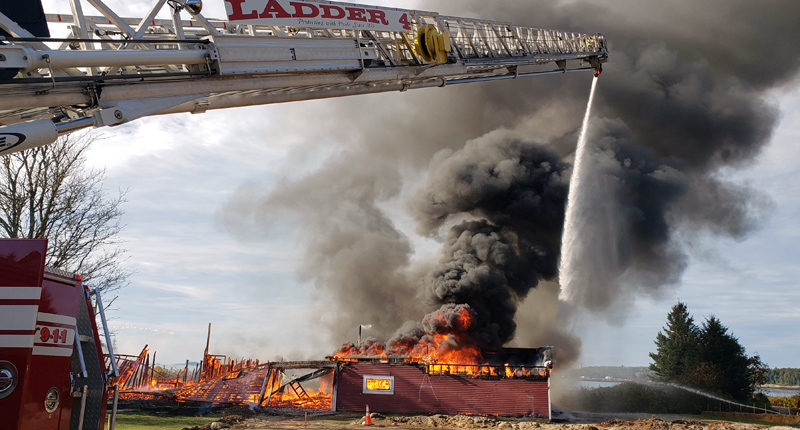 A firefighter atop the Damariscotta ladder truck directs a stream of water onto the Pemaquid Beach pavilion during a training exercise Sunday, Oct. 20. (Photo courtesy John Roberts)

The old Pemaquid Beach building went up in flames during a training exercise for local firefighters Sunday, Oct. 20.

The burn clears the way for the construction of three new, smaller buildings, a nearly $900,000 project. The new facilities are expected to open next season.

The 1960 building was home to a snack bar, the Beachcomber’s Rest Nature Center, restrooms, a rental shop, office space, and a community room.

About 30 onlookers gathered to watch the pavilion burn. Even from a safe distance, the flames provided some welcome warmth on the chilly Sunday morning. The Bristol Fire Department led the training exercise.

Bristol Parks and Recreation Commissioner Laurie Mahan said it was much more economical to volunteer the old pavilion for a training burn than to demolish it. She said the burn is advantageous to the area fire departments as well.

Bristol Parks and Recreation Director Lara Sargent said area residents salvaged a lot of the contents of the building. People took lumber, lighting, countertops, and even the large barn doors.

Firefighters used over 140,000 gallons of water during the exercise, with Bristol tankers shuttling 3,000-gallon loads from the Pemaquid River, at a site near the former Hammond Lumber Co. on Bristol Road.

The South Bristol Fire Department shuttled water from the ice pond on Route 32 in New Harbor.

Bristol Fire Chief Paul Leeman Jr. deemed the burn a success. He said it went smoothly and there were no injuries.

Leeman said it is important to conduct training burns to give volunteer firefighters real-life experience dealing with a burning building.

“Some of these young guys, they’ve never been to a fire,” he said.

Leeman said the training started with three separate interior burns. These burns were in the bathroom and shower areas, where it was easier to contain the fires because of the tile.

The interior burns simulated a “room and contents” fire, Leeman said. This allows firefighters to train for containing a fire while checking and securing the rest of the building.

Leeman said all that was used to ignite the fires was hay and some wooden pallets.

After the fire began to spread to the exterior, all firefighters were evacuated from the building and an “all clear” horn was blared to signal as much.

Leeman said fires were then ignited on the opposite side of the building to allow for a more even burn and for the walls to collapse inward at the end.

As the building burned, a view of the beach and the ocean beyond was revealed.

Sargent said work is expected to start on the new buildings as soon as the ash from the burn is tested for lead, per Maine Department of Environmental Protection requirements.

As soon as the testing is done, workers will begin to remove the ash and break up the concrete base to reuse as fill in the new project.

Sargent said she removed about 40-50 pieces of red siding from the building to create pieces of memorabilia with. She will paint “Pemaquid Beach pavilion 1960-2019” on them.

The keepsakes will be available to anyone for a donation. For more information, contact the Bristol Parks and Recreation Department at 563-1800.