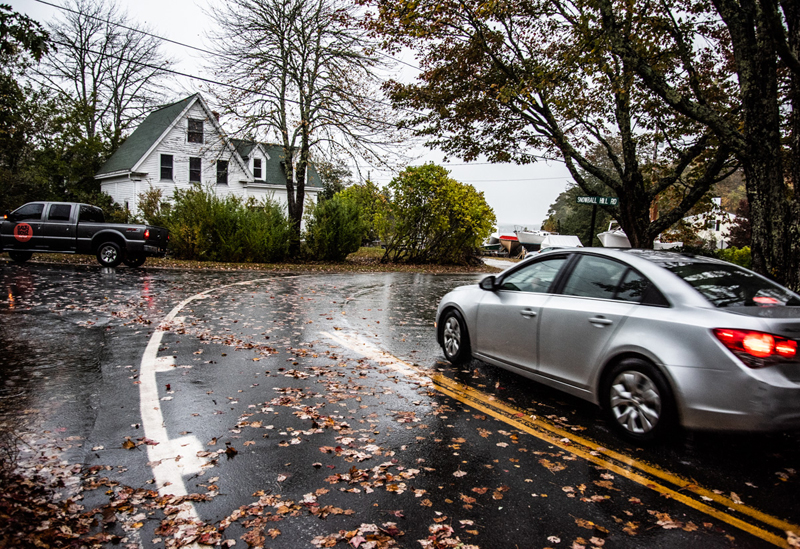 Residents of Pemaquid Beach are petitioning the Bristol Board of Selectmen to address concerns about traffic safety in the village.

At their meeting Wednesday, Oct. 7, the selectmen received a petition signed by 45 village residents. Jim Levis, of Huddle Road, led the petition drive and met with the selectmen.

Levis said he has long witnessed speeding on Huddle Road. In August, he asked the Lincoln County Sheriff’s Office for help. The sheriff’s office installed an electronic sign that collects data and produces a report.

The sign was on Huddle Road about 50 feet before the intersection with Snowball Hill Road, where the speed limit is 25 mph. The report covers the period from Aug. 13-24.

“What it shows is we have a real problem. … Speed ranges were between 10 and 53 miles per hour,” Levis said. He said 30% of drivers exceeded the speed limit by more than 50%.

Levis estimated that the intersection of Huddle and Snowball Hill roads sees anywhere from 50-250 pedestrians a day, including dog walkers and joggers. Bicyclists also visit the area.

“It’s only a matter of time before something serious happens,” Levis said.

Levis spoke about the density of homes and seasonal rentals in the village and the lack of shoulders on the roads.

He pointed out that Pemaquid Beach Park and its new pavilion had more visits this summer, even amid the pandemic, and the park contributes to traffic in the village.

Meanwhile, the state plans to enlarge the existing boat ramp at Colonial Pemaquid State Historic Site, which could attract larger boats and lead to more and more dangerous traffic, according to Levis.

Bristol Town Administrator Chris Hall said some of the property owners in the village have offered to grant rights of way that would allow for the construction of paved shoulders or sidewalks.

Hall will contact the Maine Department of Transportation to discuss the matter.

Mark Becker and Deb Wilson, of Becker Construction Inc., gave an update on the construction of the fish ladder at the Bristol Mills Dam. Wilson said the project is going well. They have finished concrete work and subcontractor Natural Concepts Inc. is well into the stonework. “Peter Anderson and his crew are doing a stupendous job,” Wilson said of the Natural Concepts owner. Anderson thinks they will finish their work by the end of the year. Wilson said they are doing alright as far as the budget. Bristol Fish Committee members Jay Crooker and Rick Poland were present and said they are pleased with the progress.

A public hearing about a proposal to build a solar array on Christian Hill Road will take place Nov. 18.

The selectmen continued their discussion of updating the town’s 16-year-old comprehensive plan. Hall suggested that the town should study its aquifers and water resources. “We know the wells are drying up in town a lot more frequently than they ever did in the past,” he said. He said the selectmen would discuss the comprehensive plan with the planning board in two weeks.